In Dorothy Sayers' novel Gaudy Night, set (and written) in 1930s England, a group of Oxford University dons are the targets of an increasingly vicious series of threats and violence by a deranged individual.  The motive of the perpetrator turns out to be that one of the dons had, years earlier, caught the perpetrator's spouse in academic dishonesty, and the spouse had been dismissed from his position, and ultimately committed suicide.

Near the end of the novel, the main character, Harriet Vane, experiences a great deal of conflict over the resolution of the mystery.  Which individual was really at fault?  Was it the woman who made the threats, a widow whose grief drove her to threaten those she felt were smug, ivory-tower intellectuals who cared nothing for the love and devotion of a wife for her husband?  Or was it the don who had exposed the husband's "crime" -- which was withholding evidence contrary to his thesis in an academic paper?  Is that a sin that's worth the destruction of one life and the ruining of another?

The perpetrator, when found out, snarls at the dons, "... (C)ouldn't you leave my man alone?  He told a lie about somebody who was dead and dust hundreds of years ago.  Nobody was the worse for that.  Was a dirty bit of paper more important than all our lives and happiness?  You broke him and killed him -- all for nothing."  The don whose words led to the man's dismissal, and ultimately his suicide, says, "I knew nothing of (his suicide) until now...  I had no choice in the matter.  I could not foresee the consequences... but even if I had..."  She trails off, making it clear that in her view, her words had to be spoken, that academic integrity was a mandate -- even if that stance left a human being in ruins.

It's not, really, a very happy novel.  One is left feeling at the end that the incident left only losers, no winners.
The central theme of the book -- that words have consequences -- is one that seems to escape a lot of today's political pundits here in the United States.  Or, more accurately, they seem to feel that the fact that words sometimes have unforeseen consequences absolves them of any responsibility for the results.  A particularly egregious example is Fox News's Tucker Carlson, who considers himself blameless in the recent surge of Delta-Variant COVID-19 -- a surge that is virtually entirely amongst the unvaccinated, and significantly higher in the highly conservative Fox-watching states of Missouri, Arkansas, and Louisiana.  Carlson told his viewers on the air that they should accost people wearing masks in public, saying that mask-wearers are "zealots and neurotics" who are "the true aggressors, here."  Anyone seeing a child wearing a mask should "call 911 or Child Protection Services immediately" -- that if you see masked children you are "morally obligated to do something."
Then, as if to drive home his stance that you should be entitled to say anything you want, free of consequence (as long as what you're saying conforms to the Trump-GOP party line, of course), he was outraged when a couple of days ago he was confronted by an angry guy in a fly-fishing store in Montana, who called Carlson "the worst human being in the world" for his anti-vaxx stance.
So, Mr. Carlson, let me get this straight: after telling your viewers they're morally obligated to accost people who disagree with them, you object to the fact that someone accosted you because he disagrees with you? 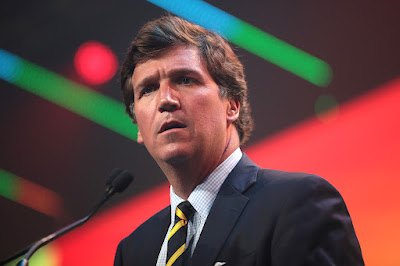 [Image licensed under the Creative Commons Gage Skidmore from Surprise, AZ, United States of America, Tucker Carlson (50752390162), CC BY-SA 2.0]
Not only does this give new meaning to the words "sanctimonious hypocrite," it also shows a fundamental lack of understanding of what the principle of free speech means.  Yes, you're entitled to say what you want; but you are not entitled to be free of the consequences of those words.  To use the hackneyed example, you can shout "Fire" in a crowded theater, but if there's a stampede and someone gets hurt or killed, you will (rightly) be held responsible.  You can call your boss an idiotic asshole, but if you get fired, no judge in the world will advocate for your reinstatement on the basis of free speech.
You said what you wanted, then got the consequences.  End of story.
So the Trump-GOP members are now trying to figure out how to spin the surge of Delta-Variant COVID-19 amongst the unvaccinated after having played the most serious public health crisis we've seen in fifty years as a political stunt, and efforts to mitigate its spread as the Left trying to destroy fundamental American liberties.  Even Governor Ron DeSantis of Florida, long one of the most vocal anti-mask, anti-vaxx elected officials -- just a few weeks ago his website had for sale merchandize with the slogan "Don't Fauci My Florida" printed on it -- has made an about-face, and is urging people to get vaccinated.
The result?  Conservatives in Florida are furious with DeSantis for "selling out," some even suggesting he had taken bribes from vaccine manufacturers to change his message.  What the fuck did he expect?  He's spent the past year and a half claiming that the pandemic is overblown and any attempt to push vaccines is a conspiracy against freedom by the Democrats.  Did he think that the people who swallowed his lies hook, line, and sinker would simply forget what he'd said, and go, "Oh, okay, I'll run right out and get vaccinated now"?
Another mealy-mouthed too-little, too-late message came from Governor Kay Ivey of Alabama, the state with the overall lowest vaccination rate (39.6%) in the country.  Alarmed by the dramatic upsurge in new cases in her state, she said, "It's time to start blaming the unvaccinated folks."
So, Governor Ivey, let's just go one step backward in the causal chain, shall we?  Why exactly are so many Americans unvaccinated, when the vaccine is available for free whether or not you have health insurance?  Why is it that if you drew up a map of Trump voters, a map of Fox News watchers, and a map of the incidence of new cases of COVID-19, the three maps would show a remarkable similarity?
You can say what you want, but you can't expect to be free of the consequences of what you say.
I'm appalled not just because political hacks like Tucker Carlson have callously used this tragedy to sledgehammer in their own views with an increasingly polarized citizenry, nor because re-election-minded governors like Ivey and DeSantis jumped on the anti-vaxx bandwagon because they didn't want to alienate the Trump-worshipers who form a significant proportion of their base.  The most appalling thing is that they have done this, blind to the end results of their words, just like the Oxford don in Gaudy Night whose dedication to the nth degree of academic integrity made her blind to the human cost of her actions.  Words are tools, and these hypocrites have used them with as much thought and responsibility as a five-year-old with a chainsaw.
And now they are expecting us to hold them faultless when the people who trusted them are, literally, dying by the thousands.
I suppose I should be glad that even DeSantis and Ivey are pivoting.  Carlson, of course, hasn't, and probably never will; his motto seems to be "Death Before Admitting Error."  Perhaps a few lives will be saved from a horrible and painful death because some conservative leaders are now changing their tunes.
But honestly; it's far too late.  A study released in February in The Lancet ascribed forty percent of the 610,000 COVID deaths in the United States directly to Trump's policies.  "Instead of galvanizing the U.S. populace to fight the pandemic," the authors state, "President Trump publicly dismissed its threat."
And unless there is a concerted effort to hold accountable the ones who caused this catastrophe -- legally, if possible, or at least at the ballot box -- we are allowing them to get away with saying, "I had no choice in the matter, I could not foresee the consequences" and doing nothing while every public health expert in the world was begging them to take action.
**************************************
One of the characteristics which is -- as far as we know -- unique to the human species is invention.
Given a problem, we will invent a tool to solve it.  We're not just tool users; lots of animal species, from crows to monkeys, do that.  We're tool innovators.  Not that all of these tools have been unequivocal successes -- the internal combustion engine comes to mind -- but our capacity for invention is still astonishing.
In The Alchemy of Us: How Humans and Matter Transformed One Another, author Ainissa Ramirez takes eight human inventions (clocks, steel rails, copper telegraph wires, photographic film, carbon filaments for light bulbs, hard disks, scientific labware, and silicon chips) and looks not only at how they were invented, but how those inventions changed the world.  (To take one example -- consider how clocks and artificial light changed our sleep and work schedules.)
Ramirez's book is a fascinating lens into how our capacity for innovation has reflected back and altered us in fundamental ways.  We are born inventors, and that ability has changed the world -- and, in the end, changed ourselves along with it.
[Note: if you purchase this book using the image/link below, part of the proceeds goes to support Skeptophilia!]