We'll discuss this at the meeting

Back in my teaching days, one of my least favorite things was when I realized that there was a faculty meeting after school.

Faculty meetings -- and, I suspect, meetings in general -- were an utter waste of time.  Not only did they take between forty-five minutes and an hour and a half to cover stuff that could have been taken care of in a three-paragraph email, they were frequently preceded by "icebreaker" games like one time (I swear I'm not making this up) holding a single raisin in our mouths for a minute then describing the sensation.  I recall distinctly sitting there thinking, "Dear god, I hope the moderator doesn't call on me."  But the universe being the twisted place it is, of course the moderator called on me.

My answer was to growl at the presenter, "The sensation is like having a raisin in my mouth."

My colleagues, who by and large knew what a grumpy sonofabitch I am, thought this was drop-dead hilarious, mostly because they were imagining what expletives I'd have included if I was just a tad less conscious of decorum and professionalism.  (One of these colleagues emailed me shortly after I retired to tell me that faculty meetings are now way less entertaining because he no longer can place bets on how many minutes it'd take for my face to go from "Impatient But Tolerating It" to "Are You Fucking Kidding Me Right Now?") 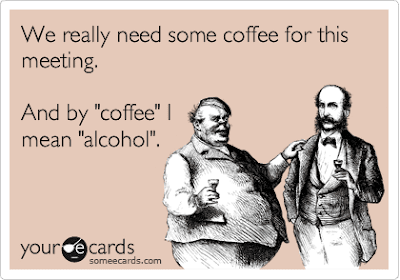 The reason all this comes up is because of some research that appeared in the journal The Leadership Quarterly last week that looked at how leaders emerge from leaderless groups.  They varied the composition of the groups -- single-gender vs. mixed-gender, age-grouped vs. mixed-age, even varying it by intelligence, personality traits, and professions of the members.  They then gave the groups tasks to perform, and observed who was most likely to become the group leader (as assessed by the groups' members afterward).

Of all the variables they tested, only one mattered.

The one who became the leader was the one who talked the most.

This idea has been observed in an anecdotal fashion before, and is amusingly called "the Babble Hypothesis."  Because it turns out it doesn't even matter what, exactly, the incipient leader was saying.  The likelihood of becoming the group leader was a function of the number of words spoken, even if what (s)he was saying was complete and utter bullshit.

"I think one take away is the importance of speaking up in group settings," said study lead author Neil MacLaren, of the Bernard M. and Ruth R. Bass Center for Leadership Studies.  "For example, if you are in a leadership position the evidence suggests you should play an active role in the conversation.  Taking this finding to extremes is unhelpful because skewed amounts of speaking time are associated with poorer group performance outcomes, but the evidence does seem consistent that people who speak more are more likely to be viewed as leaders."

This explains why I was not looked upon as a leader in our school (although I do think I was well-respected as a teacher).  I rarely spoke at faculty meetings, and that was for one specific reason: if I said something, it would make the meeting last longer.  There were a handful of faculty members who could always be counted upon to raise their hands when the call came for comments or questions on the day's topic, and it's a damn good thing that the evil eye isn't a real thing, because I would always look at them like this: 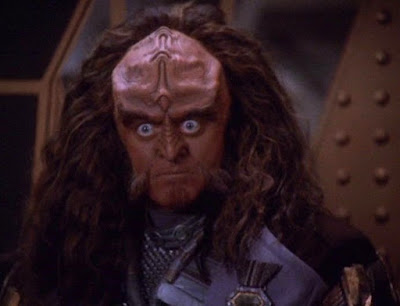 Not that it ever had an effect.  I have a sneaking suspicion these people actually enjoy meetings, which I have a hard time fathoming.  My attitude toward meetings was that if I was offered a choice of attending weekly meetings for a year or having my prostate examined by Edward Scissorhands, I'd have to think about it.
Anyhow, that's today's episode of Bizarre Human Social Behavior.  I have to say that although there are many things I miss about teaching, being retired does have some serious perks.  Now the only meetings I attend are with my dogs, and they seldom talk about such things as Changing Educational Paradigms or Thinking Outside the Box or Restructuring Curricular Frameworks.  All they want to discuss is why their food bowls are empty and whether the weather's nice enough to go outside and play.
That kind of meeting, I can deal with.
***************************************
Author Michael Pollan became famous for two books in the early 2000s, The Botany of Desire and The Omnivore's Dilemma, which looked at the complex relationships between humans and the various species that we have domesticated over the past few millennia.
More recently, Pollan has become interested in one particular facet of this relationship -- our use of psychotropic substances, most of which come from plants, to alter our moods and perceptions.  In How to Change Your Mind, he considered the promise of psychedelic drugs (such as ketamine and psilocybin) to treat medication-resistant depression; in this week's Skeptophilia book recommendation of the week, This is Your Mind on Plants, he looks at another aspect, which is our strange attitude toward three different plant-produced chemicals: opium, caffeine, and mescaline.
Pollan writes about the long history of our use of these three chemicals, the plants that produce them (poppies, tea and coffee, and the peyote cactus, respectively), and -- most interestingly -- the disparate attitudes of the law toward them.  Why, for example, is a brew containing caffeine available for sale with no restrictions, but a brew containing opium a federal crime?  (I know the physiological effects differ; but the answer is more complex than that, and has a fascinating and convoluted history.)
Pollan's lucid, engaging writing style places a lens on this long relationship, and considers not only its backstory but how our attitudes have little to do with the reality of what the use of the plants do.  It's another chapter in his ongoing study of our relationship to what we put in our bodies -- and how those things change how we think, act, and feel.
[Note:  if you purchase this book using the image/link below, part of the proceeds goes to support Skeptophilia!]