An author friend of mine recently posted a dilemma; she had come up with a killer title for her work-in-progress only to find out that another author had grabbed it first.  What to do?

Well, except for very famous, high monetary-value stories -- such as the ones owned by the Mouse Who Shall Not Be Named -- few titles are actually trademarked, which means that legally, you can publish a book under a title that's already been used.  In terms of common courtesy, however, the best answer comes from Wile E. Coyote: "Back to the old fiasco hatchery."

Myself, I think titles are critical.  They're one of the first things a potential reader sees (the first is most likely the cover illustration).  I find it intriguing to consider what people choose for titles, especially in cases where the choice is highly un-memorable.  Consider the formulaic approach, used most commonly in spaceship-and-alien science fiction: "The" + "alien sounding word" + one of the following words: "Maneuver, Gambit, Strategy, Solution, Encounter, Factor, Machine, Incident, Syndrome."   The Sqr'll'nutz Factor. The Bäbu'shkä Maneuver.  That sort of thing. 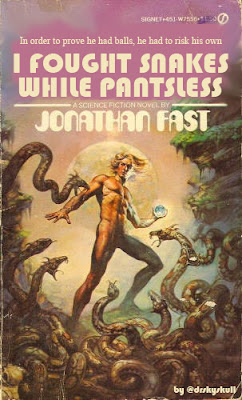 This book isn't real, but it definitely should be, because I would read the hell out of it.  (For other amazing examples, visit the page "Fake Book Titles Extravaganza!"  Do not try to drink anything while looking at this website.  You have been warned.)
The problem is, formulaic titles are often so ridiculously uncreative that they will promptly blend in with all of the other Encounters and Gambits and Maneuvers you've read about, and as a writer, that's definitely not the impression you want to create.  Memorable titles are short, pithy, and intriguing.  I tend to like metaphorical titles -- ones which provoke curiosity ("What on earth could that be referring to?") coupled with an "Aha!" moment when you read the story and actually figure it out.

As some examples, here are some of my favorite titles I've run across:
And a few that I think don't work so well:
So, anyway, that gives you an idea of what I shoot for, with titles.  Here are a few titles I've come up with that I think work pretty well.  I'll leave it to you to decide if you think they're intriguing or dreadful.
**************************************
One of the characteristics which is -- as far as we know -- unique to the human species is invention.
Given a problem, we will invent a tool to solve it.  We're not just tool users; lots of animal species, from crows to monkeys, do that.  We're tool innovators.  Not that all of these tools have been unequivocal successes -- the internal combustion engine comes to mind -- but our capacity for invention is still astonishing.
In The Alchemy of Us: How Humans and Matter Transformed One Another, author Ainissa Ramirez takes eight human inventions (clocks, steel rails, copper telegraph wires, photographic film, carbon filaments for light bulbs, hard disks, scientific labware, and silicon chips) and looks not only at how they were invented, but how those inventions changed the world.  (To take one example -- consider how clocks and artificial light changed our sleep and work schedules.)
Ramirez's book is a fascinating lens into how our capacity for innovation has reflected back and altered us in fundamental ways.  We are born inventors, and that ability has changed the world -- and, in the end, changed ourselves along with it.
[Note: if you purchase this book using the image/link below, part of the proceeds goes to support Skeptophilia!]