Australia has a reputation for being the home of wildlife that pretty much all wants to kill you.

It has some of the world's most venomous (and aggressive) snakes and some of the world's most venomous (and aggressive) spiders.  There are enormous saltwater crocodiles lying in the shallows, waiting for the next stupid tourist to happen along.  In the northern part of the country, they have cassowaries, which will eliminate any doubt that birds are descended from dinosaurs.  They have "paralysis ticks" that are pretty much exactly what they sound like.  There's the most venomous creature known, the innocent-looking box jellyfish, whose toxin is one of the most poisonous naturally-occurring substances -- 0.04 milligrams per kilogram of body weight is the LD50 (dose that would kill fifty percent of the individuals exposed to it).  Most of the mammals are relatively benign, although it's worth mentioning that the iconic kangaroo has kicked people to death, mostly the stupid tourists who didn't get eaten by crocodiles earlier in this paragraph.

There's even a plant called the gympie-gympie that is basically the nettle from hell; the hairs on the leaves embed themselves in your skin, leading to excruciating pain that can last over a year.  And they have a species of grass, spinifex grass (Triodia spp.) that pulls up silica from the soil and deposits it in the needle-sharp leaf tips.  Silica, of course, is the chemical name for glass.  So walking naked through a field of spinifex grass is highly discouraged.

Australia: where even the plants want to cut a bitch.

So I suppose it shouldn't have been surprising that a recent discovery of a previously-unknown species of pterodactyloid in Australia yielded a picture of this critter that is like something out of a nightmare.  Christened Thapunngaka shawi -- the genus name comes from the indigenous Wanamara language, and means "spear mouth;" the species name is after the fossil's discoverer, Len Shaw -- the creature was described by paleontologist Tim Richard of the University of Queensland as "the closest thing we have to a real-life dragon."

This thing had a wingspan of seven meters, making it neck-and-neck with the largest pterodactyloid yet known, Quetzalcoatlus, which at least didn't have big nasty pointy teeth.  Thapunngaka, though?  C'mon.  It's from Australia.

Here's an artist's recreation of Thapunngaka: 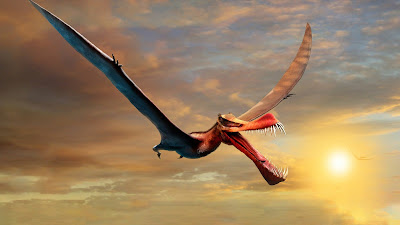 "It was essentially just a skull with a long neck, bolted on a pair of long wings," Richard said.  "This thing would have been quite savage.  It would have cast a great shadow over some quivering little dinosaur that wouldn't have heard it until it was too late."

So that's cheerful.  The good news is that when it was alive, most of central Australia was a huge inland sea, and the last of them died out something on the order of 92 million years ago.

It's an open question why Australia is the home of so many dangerous life forms.  I have to wonder if it's not some kind of evolutionary arms race; when one species evolves a toxin (or other dangerous feature), the other species in the area are highly selected for any genetic variations that allow them to become (1) resistant, and (2) more dangerous themselves.  Each improvement (so to speak) in one species leads to pressure to improve in the other species, until you finally have a faunal and floral assemblage that makes Audrey II from Little Shop of Horrors seem positively friendly by comparison.
In any case, it's interesting that this has been going on since prehistoric times.  I guess it's not surprising, really; such a scary bunch of wildlife doesn't just evolve overnight.  I have friends in Australia who have assured me that the danger is over-hyped and that they haven't had any bad encounters, so i suppose it shouldn't discourage me from visiting.  At least I have the comfort of knowing that all I have to avoid are the spiders and snakes and ticks and jellyfish and crocodiles and cassowaries and various native plants; at least I don't have to worry about getting speared by a seven-meter-wingspan aerial death machine.
**********************************************
This week's Skeptophilia book-of-the-week is by an author we've seen here before: the incomparable Jenny Lawson, whose Twitter @TheBloggess is an absolute must-follow.  She blogs and writes on a variety of topics, and a lot of it is screamingly funny, but some of her best writing is her heartfelt discussion of her various physical and mental issues, the latter of which include depression and crippling anxiety.
Regular readers know I've struggled with these two awful conditions my entire life, and right now they're manageable (instead of completely controlling me 24/7 like they used to do).  Still, they wax and wane, for no particularly obvious reason, and I've come to realize that I can try to minimize their effect but I'll never be totally free of them.
Lawson's new book, Broken (In the Best Possible Way) is very much in the spirit of her first two, Let's Pretend This Never Happened and Furiously Happy.  Poignant and hysterically funny, she can have you laughing and crying on the same page.  Sometimes in the same damn paragraph.  It's wonderful stuff, and if you or someone you love suffers from anxiety or depression or both, read this book.  Seeing someone approaching these debilitating conditions with such intelligence and wit is heartening, not least because it says loud and clear: we are not alone.
[Note: if you purchase this book using the image/link below, part of the proceeds goes to support Skeptophilia!]