There's a story about Socrates, who was asked what he thought about his reputation for being the smartest man in the world.
The great philosopher thought for a moment, and responded, "If I am, it is only because I alone realize how little I know."
I think there's something to this.  Ignorance confers a kind of cockiness sometimes; another great thinker, Bertrand Russell, once said, "The whole problem with the world is that fools and fanatics are always so certain of themselves, and wiser people so full of doubts."  It's inevitable that learning generates some level of humility, because one is always reminded of how much left there is to learn.
This is probably why I was so damn cocky as a college freshman.  Once I got to be a junior, I realized how foolish that was, as I got an inkling of how much I didn't know.  (Of course, nearly failing Classical Mechanics also had a dampening effect on my ego.  That was the moment I realized I didn't have the brains to be a physicist.)
Whenever I start perusing scientific journals -- a common occupation, as I'm looking for topics for Skeptophilia -- I'm amazed at what we've uncovered about the world we live in, and also how much there is left to learn.  That was one of my main takeaways from three scientific papers I came across last week; that, and a sense of wonder at how cool science is.
The first was a link sent to me by my buddy (and fellow writer) Gil Miller.  A paper in Nature by Elizabeth Turner, paleontologist at the Harquail School of Earth Sciences at Laurentian University, describes a find at a dig site in northwestern Canada that seems to contain fossils of one of the earliest and simplest animal groups -- sponges.
What's mind-boggling about this discovery is that the rocks of the Stone Knife Formation, where the fossils were discovered, are about 890 million years old.  So if confirmed, this would predate the next-oldest undisputed sponge fossils by 350 million years.  This might just get a shoulder shrug, because most people -- myself included, unless I force myself to stop and think about it -- get lost when the numbers get large, so a 350 million year gap falls into the "it's big, but I can't visualize how big" category.  Let me put this number in perspective for you: if you went back 350 million years from today, you'd be in a world where there were no dinosaurs -- the earliest dinosaurs wouldn't appear for another 90 million years or so.
That's how far back Turner's discovery pushes the earliest animals.
If confirmed, this would place the origin of animals prior to the Cryogenian Period (also called the "Snowball Earth") of between 720 and 635 million years ago, one of the most massive worldwide glaciation events known.
The second paper, in Science Advances, is about the evolution of modern dinosaurs -- or, as we usually call them, "birds."  It's striking that the ancestors of today's birds survived a catastrophic bottleneck at the end of the Cretaceous Period 66 million years ago, caused by the double whammy of a massive meteorite collision and a near-simultaneous flood basalt eruption in what is now India.  (Scientists have yet to determine if the two events were connected -- if, perhaps, the collision destabilized the crust and caused the eruption.)
The paper centers on the discovery of a fantastically well-preserved fossil of Ichthyornis, an aquatic bird species of about 70 million years ago.  Picture a  gull with teeth, and you have a pretty good idea of what Ichthyornis looked like. 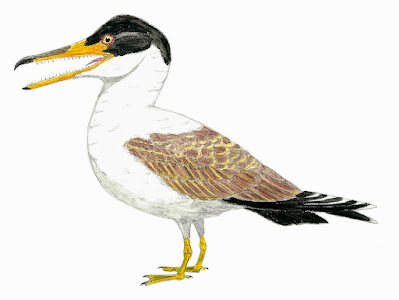 Reconstruction of Icthyornis dispar [Image licensed under the Creative Commons El fosilmaníaco, Ichthyornis restoration, CC BY-SA 4.0]
What is remarkable about this fossil is the preservation of the skull, which gives the researchers a good look at the structure of the brain it once enclosed.  What they found is that the likelihood of a bird lineage surviving the bottleneck was largely due to one thing -- brain size.  Put simply, when the extinction came, the big dumb species tended to die out, and the small smart species survived.
"Living birds have brains more complex than any known animals except mammals," said study lead investigator Christopher Torres, of the University of Texas and Ohio University.  "This new fossil finally lets us test the idea that those brains played a major role in their survival...  If a feature of the brain affected survivorship, we would expect it to be present in the survivors but absent in the casualties, like Ichthyornis.  That's exactly what we see here."
The third paper, in Nature, is about one of the world's weirdest plants -- Welwitschia mirabilis, of the deserts of Namibia.  The number of bizarre features of this plant are too many to list, but include:
To me it falls into the "ugly but fascinating" category. 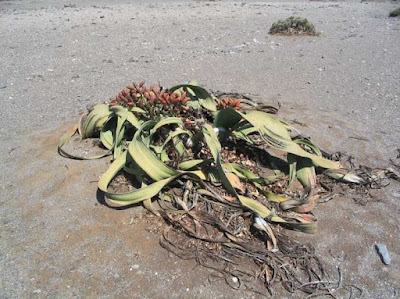 [Image licensed under the Creative Commons Muriel Gottrop, Welwitschia at Ugab River basin, CC BY-SA 3.0]
The current paper is about the Welwitschia genome, which has a number of interesting features.  First, it seems to have originated when there was a spontaneous duplication of the DNA about 85 million years ago that led to its being genetically isolated from its near relatives, after which it continued to develop along its own lines.  Duplication of the genome has an advantage -- providing extra copies of vital genes, so if mutation knocks out a copy, there's still a functional one available -- but it has the disadvantage of overproduction of gene products (too much of a protein can be as bad as not enough; this is why chromosomal duplications, as in Down syndrome, lead to developmental problems).
Welwitschia solved the disadvantage by a process called methylation, which chemically ties up and shuts down genes.  This is done during normal development in many species, where turning genes on and off at the right times is absolutely critical, and it also knocks out genetic parasites called transposons (a transposon is a segment of DNA that is able to copy itself and splice those copies elsewhere in the DNA -- a sort of copy-and-paste function gone haywire).  So Welwitschia ended up with a huge genome, of which a lot -- the researchers found about 55% -- is composed of shut-down transposons and other methylated (i.e. non-functional) sequences.
Also very weird is the balance between the different nitrogenous bases in Welwitschia's DNA.  You probably know that the "alphabet" of DNA is made up of four bases -- adenine, thymine, cytosine, and guanine -- and that they pair together like puzzle pieces, A with T, C with G.  So in normal DNA, there will always be exactly as much A as T and exactly as much C as G.
But the other ratios -- A to C, for example -- vary by species.  Still, the number of A/T pairs and C/G pairs is usually fairly close.  Unsurprisingly, this plant, which is an exception to so many rules, is an exception to this one as well -- only 29% of its DNA is made up of C/G pairs.
The upshot: this paper shows that an ugly but fascinating plant is even more interesting than we'd realized.
All of this, published just in the last week.  Which brings me back to Socrates.  I'm not claiming to be anywhere near as smart as he was, but I do share one belief with him.
So much to learn, so little time.
**********************************************
Author and biochemist Camilla Pang was diagnosed with autism spectrum disorder at age eight, and spent most of her childhood baffled by the complexities and subtleties of human interactions.  She once asked her mother if there was an instruction manual on being human that she could read to make it easier.
Her mom said no, there was no instruction manual.
So years later, Pang recalled the incident and decided to write one.
The result, Explaining Humans: What Science Can Teach Us About Life, Love, and Relationships, is the best analysis of human behavior from a biological perspective since Desmond Morris's classic The Naked Ape.  If you're like me, you'll read Pang's book with a stunned smile on your face -- as she navigates through common, everyday behaviors we all engage in, but few of us stop to think about.
If you're interested in behavior or biology or simply agree with the Greek maxim "gnothi seauton" ("know yourself"), you need to put this book on your reading list.  It's absolutely outstanding.
[Note:  if you purchase this book using the image/link below, part of the proceeds goes to support Skeptophilia!]