One of the things I pride myself on is honesty.

I'm not trying to say I'm some kind of paragon of virtue, but I do try to tell the truth in a direct fashion.  I hope it's counterbalanced by kindness -- that I don't broadcast a hurtful opinion and excuse it by saying "I'm just being honest" -- but if someone wants to know what I think, I'll tell 'em.

As the wonderful poet and teacher Taylor Mali put it, "I have a policy about honesty and ass-kicking.  Which is: if you ask for it, I have to let you have it."  (And if you haven't heard his wonderful piece "What Teachers Make," from which that quote was taken -- sit for three minutes right now and watch it.)

I think it's that commitment to the truth that first attracted me to science.  I was well aware from quite a young age that there was no reason to equate an idea making me happy and an idea being the truth.  It was as hard for me to give up magical thinking as the next guy -- I spent a good percentage of my teenage years noodling around with Tarot cards and Ouija boards and the like -- but eventually I had to admit to myself that it was all a bunch of nonsense.
In science, honesty is absolutely paramount.  It's about data and evidence, not about what you'd dearly love to be true.  As the eminent science fiction author Phillip K. Dick put it, "Reality is that which, when you stop believing in it, it doesn't go away."
Or perhaps I should put it, "it should be about data and evidence."  Scientists are human, and are subject to the same temptations the rest of us are -- but they damn well better be above-average at resisting them.  Because once you've let go of that touchstone, it not only calls into question your own veracity, it casts a harsh light on the scientific enterprise as a whole.

And to me, that's damn near unforgivable.  Especially given the anti-science attitude that is currently so prevalent in the United States.  We don't need anyone or anything giving more ammunition to the people who think the scientists are lying to us for their own malign purposes -- the people whom, to quote the great Isaac Asimov, think "my ignorance is as good as your knowledge."

Which brings me to Dan Ariely.

Ariely is a psychological researcher at Duke University, and made a name for himself studying the issue of honesty.  I was really impressed with him and his research, which looked at how our awareness of the honor of truth-telling affects our behavior, and the role of group identification and tribalism in how much we're willing to bend our own personal morality.  I used to show his TED Talk, "Our Buggy Moral Code," to my Critical Thinking classes at the beginning of the unit on ethics; his conclusions seemed to be a fascinating lens on the whole issue of honesty and when we decide to abandon it.

Which is more than a little ironic, because the data Ariely used to support these conclusions appear to have been faked -- possibly by Ariely himself. 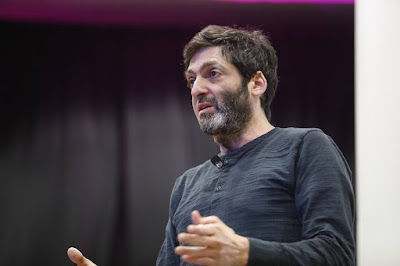 Ariely has not admitted any wrongdoing, but has agreed to retract the seminal paper on the topic, which appeared in the prestigious journal Proceedings of the National Academy of Sciences back in 2012.  "I can see why it is tempting to think that I had something to do with creating the data in a fraudulent way," Ariely said, in a statement to BuzzFeed News.  "I can see why it would be tempting to jump to that conclusion, but I didn’t...  If I knew that the data was fraudulent, I would have never posted it."

His contention is that the insurance company that provided the data, The Hartford, might have given him fabricated (or at least error-filled) data, although what their motivation could be for doing so is uncertain at best.  There's also the problem that the discrepancies in the 2012 paper led analysts to sift through his other publications, and found a troubling pattern of sloppy data-handling, failures in replicability of results, misleading claims about sources, and more possible outright falsification.  (Check out the link I posted above for a detailed overview of the issues with Ariely's work.)

Seems like the one common thread running through all of these allegations is Ariely.

It can be very difficult to prove scientific fraud.  If a researcher deliberately fabricated data to support his/her claims, how can you prove that it was deliberate, and not either (1) an honest mistake, or (2) simply bad experimental design (which isn't anything to brag about, but is still in a separate class of sins from outright lying).  Every once in a while, an accused scientist will actually admit it -- one example that jumps to mind is Korean stem-cell researcher Hwang Woo-Suk, whose spectacular fall from grace reads like a Shakespearean tragedy -- but like many politicians who are accused of malfeasance, a lot of times the accused scientist just decides to double down, deny everything, and soldier on, figuring that the storm will eventually blow over.

And, sadly, it usually does.  Even in Hwang's case -- not only did he admit fraud, he was fired by Seoul National University and tried and found guilty of embezzlement -- he's back doing stem-cell research, and since his conviction has published a number of papers, including ones in PubMed.

I don't know what's going to come of Ariely's case.  Much is being made about the fact that a researcher in honesty and morality has been accused of being dishonest and immoral.  Ironic as this is, the larger problem is that this sort of thing scuffs the reputation of the scientific endeavor as a whole.  The specific results of Ariely's research aren't that important; what is much more critical is that this sort of thing makes laypeople cast a wry eye on the entire enterprise.

And that, to me, is absolutely inexcusable.

*********************************************
I've been interested for a long while in creativity -- where it comes from, why different people choose different sorts of creative outlets, and where we find our inspiration.  Like a lot of people who are creative, I find my creative output -- and my confidence -- ebbs and flows.  I'll have periods where I'm writing every day and the ideas are coming hard and fast, and times when it seems like even opening up my work-in-progress is a depressing prospect.
Naturally, most of us would love to enhance the former and minimize the latter.  This is the topic of the wonderful book Think Like an Artist, by British author (and former director of the Tate Gallery) Will Gompertz.  He draws his examples mostly from the visual arts -- his main area of expertise -- but overtly states that the same principles of creativity apply equally well to musicians, writers, dancers, and all of the other kinds of creative humans out there.
And he also makes a powerful point that all of us are creative humans, provided we can get out of our own way.  People who (for example) would love to be able to draw but say they can't do it, Gompertz claims, need not to change their goals but to change their approach.
It's an inspiring book, and one which I will certainly return to the next time I'm in one of those creative dry spells.  And I highly recommend it to all of you who aspire to express yourself creatively -- even if you feel like you don't know how.
[Note: if you purchase this book using the image/link below, part of the proceeds goes to support Skeptophilia!]