The drive to adorn our bodies is pretty close to universal.

Clothing, for example, serves the triple purpose of protecting our skin, keeping us warm, and making us look good.  Well, some of us.  I'll admit up front that I have a fashion sense that, if you were to rank it on a scale of one to ten, would have to be expressed in imaginary numbers.  But for a lot of people, clothing choice is a means of self-expression, a confident assertion that they care to look their best.

Then there are tattoos, about which I've written here before because I'm a serious fan (if you want to see photos of my ink, take a look at the link).  Tattooing goes back a long way -- Ötzi the "Ice Man," a five-thousand-year-old body discovered preserved in glacial ice in the Alps, had no fewer than 61 tattoos.  No one knows what Ötzi's ink signifies; my guess is that just like today, the meanings of tattoos back then were probably specific to the culture, perhaps even to the individual.

Then there's jewelry.  We know from archaeological research that jewelry fashioned from gems and precious metals also has a long history; a 24-karat gold pendant found in Bulgaria is thought to have been made in around 4,300 B.C.E., which means that our distant ancestors used metal casting for more than just weapon-making.  So between decorative clothing, tattoos, and jewelry, we've been spending inordinate amounts of time and effort (and pain, in the case of tattooing, piercing, and scarification) altering our appearances.

Why?  No way to be sure, but my guess is that there are a variety of reasons.  Enhancing sexual attractiveness certainly played, and plays, a role.  Some adornments were clearly signs of rank, power, or social role.  Others were personal means of self-expression.  Evolutionists talk about "highly conserved features" -- adaptations that are between common and universal within a species or a clade -- and the usual explanation is that anything that is so persistent must be highly selected, and therefore important for survival and reproduction.  It's thin ice to throw learned behaviors in this same category, but I think the same argument at least has some applicability here; given that adornment is common to just about all human groups studied, the likelihood is that it serves a pretty important purpose.  What's undeniable is that we spend a lot of time and resources on it that could be used for more directly beneficial activities.

What's most interesting is that we're the only species we know of that does this.  There are a few weak instances of this sort of behavior -- for example, the bowerbirds of Australia and New Guinea, in which the males collect brightly-colored objects like flower petals, shells, and bits of glass or stone to create a little garden to attract mates.  But we seem to be the only animals that regularly adorn their own bodies.

How far back does this impulse go?  We got at least a tentative answer to this in a paper this week in Science Advances, which was about an archaeological discovery in Morocco of shell beads that were used for jewelry...

"They were probably part of the way people expressed their identity with their clothing," said study co-author Steven Kuhn, of the University of Arizona.  "They’re the tip of the iceberg for that kind of human trait.  They show that it was present even hundreds of thousands of years ago, and that humans were interested in communicating to bigger groups of people than their immediate friends and family." 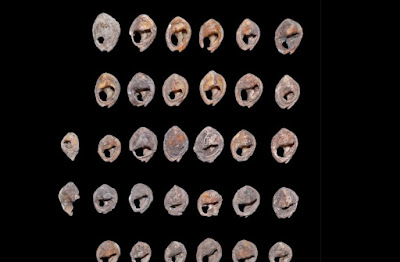 A sampling of the Stone Age shell beads found in Morocco
Like with Ötzi's tattoos, we don't know what exactly the beads were intending to communicate.  Consider how culture-dependent those sorts of signals are; imagine, for example, taking someone from three thousand years ago, and trying to explain what the subtle and often complex significance of appearances and behaviors that we here in the present understand immediately.  "You think about how society works – somebody’s tailgating you in traffic, honking their horn and flashing their lights, and you think, ‘What’s your problem?'" Kuhn said.  "But if you see they’re wearing a blue uniform and a peaked cap, you realize it’s a police officer pulling you over."
Unfortunately, there's probably no way to know whether the shell beads were used purely for personal adornment, or if they had another religious or cultural significance.  "It’s one thing to know that people were capable of making them," Kuhn said, "but then the question becomes, 'OK, what stimulated them to do it?'...  We don’t know what they meant, but they’re clearly symbolic objects that were deployed in a way that other people could see them."
So think about that next time you put on a necklace or bracelet or earrings.  You are participating in a tradition that goes back at least 150,000 years.  Maybe our jewelry-making ability has improved beyond shell beads with a hole drilled through, but the impulse remains the same -- whatever its origins.