In his wonderful poem/performance piece Storm, Tim Minchin said: "Throughout history, every mystery ever solved has turned out to be 'not magic'."

As I've pointed out many times here before, it's not that I'm saying any of the thus-far-classified-as "out there beliefs" are impossible; it's that if they actually do exist, they should be accessible to scientific inquiry.  Auras, qi, chakras?  Demonstrate they're detectable by something other than a subjective viewer.  Hauntings?  Ditto.  Cryptids of various shapes and descriptions?  Give me something analyzable other than blurry photos and anecdotal eyewitness accounts.  Psychic abilities?  Show they work under controlled conditions.

Interestingly, there was just an article in The Skeptic asserting that parapsychology has grown to the point that it deserves the title of science rather than pseudoscience.  I'm sure that the author, Chris French, professor of psychology at the University of London, will receive some blowback from this essay, as will The Skeptic in general for publishing it; but I agree with his central thesis, which is that parapsychological claims stand and fall on exactly the same basis as scientific claims do -- evidence.

And, as Minchin says, if a supernatural explanation turns out to be scientifically demonstrable, then it's no longer supernatural, is it?  It's just natural.  After that, it can be studied by the methods of science, just like every other feature of our weird, wonderful, amazingly complex universe.

What brings this up is a recent paper in Meteorology and Atmospheric Physics that considered the odd phenomenon of the "Hessdalen Lights" which occurs in a valley in central Norway, wherein people report seeing free-floating balls of light.  I'd written about the Hessdalen Lights (and various other accounts of lights in the sky) back in 2017, and described it as follows:

The Hessdalen Lights have been seen since the 1940s in the valley of Hessdalen in Norway.  They're stationary, bright white or yellow lights, floating above the ground, sometimes remaining visible for over an hour.  With such a cooperative phenomenon, you would think it would be easily explained; but despite the efforts of scientists, who have been studying the Hessdalen Lights for decades, there is yet to be a convincing explanation.  Hypotheses abound: that it is the combustion of dust from the valley floor; that it is a stable plasma, ionized by the decay of radon from minerals in the valley; or even that it is an electrical discharge from piezoelectric compression of quartz crystals in the underlying rock.  None of these is completely convincing, and the Hessdalen Lights remain one of the most puzzling natural phenomena I know of.

The lack of a convincing explanation opens the door to all sorts of wild speculation, and those abound -- ghosts, aliens, portals in time and space, you name it. 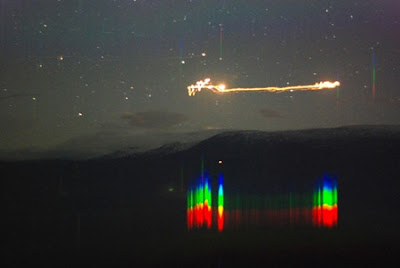 Photograph of the Hessdalen Lights
As usual, my fallback position was, "I may not know what the scientific explanation is, but I'm certain that one exists."  Given how many times this phenomenon has been reported and photographed, it seemed pretty likely that it wasn't a hoax, or even misattributing it to something purely prosaic (like Neil deGrasse Tyson's story of a cop who was driving down a winding country road, chasing a "weird light in the sky" -- which turned out to be the planet Venus).  So accepting that the Hessdalen Lights actually occur as advertised, what the hell are they?

Much was my delight when I ran across the recent paper, by atmospheric chemist Gerson Paiva of Federal University Pernambuco (Brazil), which seems to have solved the mystery, using...

Hessdalen lights are unusual, free-floating light balls presenting different shapes and light colors, observed in the Hessdalen valley in rural central Norway.  In this work, it is shown that these ghostly light balls are produced by an electrically active inversion layer above Hessdalen valley during geomagnetic storms.  Puzzling geometric shapes and energy content observed in the HL phenomenon may be explained through a little-known solution of Maxwell’s equations to electric (and magnetic) field lines: they can form loops in a finite space...  “Natural battery”, aerosols and global atmospheric electric circuits may play a crucial role for the electrification of the temperature inversion layers.

Now, I hasten to add that I don't know if Paiva's explanation is right.  But that's the other great thing about science; it's falsifiable.  When a researcher publishes something like this, it's immediately analyzed and taken to pieces by other experts in the field.  Unlike us fiction writers, who basically want everyone to read our writing and tell us how awesome it is, scientists are looking for rigorous criticism; they want their colleagues to try to tear it down, to see if their analysis is robust enough to withstand attempts to refute it.  So time will tell if Paiva has found the answer to this enduring mystery of atmospheric science.
But even if he hasn't, I'd bet cold hard cash that like Tim Minchin said, the answer will still turn out to be "not magic."