A couple of weeks ago, we looked at the discovery and decipherment of a codex written in Nahuatl, one of the languages spoken by the Aztecs (and still spoken in central Mexico).  The study highlighted the fact that language is one of the most critical pieces of culture, embodying a unique way of describing the world.  When languages disappear, that perspective is forever lost.

It's even worse than that, according to another study, that appeared in Proceedings of the National Academy of Sciences a couple of months ago.  In "Language Extinction Triggers the Loss of Unique Medicinal Knowledge," authors Rodrigo Cámara-Leret and Jordi Bascompte of the University of Zürich look at the role of language in preserving information about medicinal plants -- information that might well be encoded in only a single one of the estimated 6,500 languages currently spoken on Earth.

Cámara-Leret and Bascompte considered indigenous languages in three places -- New Guinea, Amazonia, and North America -- lining up those languages with databases of medicinal native plants.  Specifically, they were looking at whether the knowledge of the medicinal value of native flora crossed linguistic boundaries, and were known (and used) in the cultures of the speakers of different languages.

Some, of course, were.  The use of willow bark as an analgesic was widely known to Native Americans throughout the eastern half of North America.  The sedative nature of poppy sap was also widespread, and has a long (and checkered) history.  (It's no coincidence that these two plants produce compounds -- aspirin and morphine, respectively -- that are part of the modern pharmacopeia.) 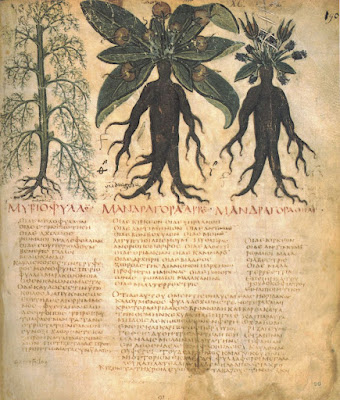 But what about the rest of the myriad species of medicinal plants that have been catalogued?  What Cámara-Leret and Bascompte found is simultaneously fascinating and alarming.  They looked at 12,495 species of medicinal flora native to the regions they studied, and found that over 75% of them were only named and known as pharmacologically valuable in a single language.

That knowledge isn't purely of interest to anthropologists, as a sort of cultural curiosity.  Consider how many lives have been saved by quinine (from the Peruvian plant Cinchona officinalis, used in treating malaria), vincristine (from the Madagascar periwinkle, Catharanthus rosea, used in treating leukemia and Hodgkin's disease), digoxin (from the foxglove plant, Digitalis purpurea, used for treating heart ailments), taxol (from the Pacific yew, Taxus brevifolia, used in treating a variety of cancers), and reserpine (from the south Asian plant Rauvolfia serpentina, used in treating hypertension).  And that's just some of the better-known ones.  The whole point of the Cámara-Leret and Bascompte study is that the majority of pharmacologically-useful plants aren't known outside of a single indigenous ethnic group -- and when those languages and cultures are lost or homogenized into the dominant/majority culture, that information is lost, perhaps forever.

"There is life outside English," Bascompte said.  "These are languages that we tend to forget—the languages of poor or unknown people who do not play national roles because they are not sitting on panels, or sitting at the United Nations or places like that.  I think we have to make an effort to use that declaration by the United Nations [the UNESCO decision that 2022 to 2032 will be the "Decade of Action for Indigenous Languages"] to raise awareness about cultural diversity and about how lucky we are as a species to be part of this amazing diversity."

I can only hope that it works, at least to slow down the cultural loss.  It's probably hopeless to stop it entirely; currently, the top ten most common first languages (in order: Mandarin, Spanish, English, Hindi, Arabic, Portuguese, Bengali, Russian, Japanese, and Punjabi) account for almost fifty percent of the world's population.
The remaining 6,490 languages account for the other half.
I understand the drive to learn one of the more-spoken languages, from the standpoint of participation in the business world (if that's your goal).  You probably wouldn't get very far international commerce if you only spoke only Ainu.  But the potential for losing unique knowledge from language extinction and cultural homogenization can't be overestimated.  Nor can the purely practical aspects of this knowledge -- including the possibility of life-saving medicinal plants that might only be recognized as such by a single small group of people in a remote area of New Guinea.
*************************************
Like graphic novels?  Like bizarre and mind-blowing ideas from subatomic physics?
Have I got a book for you.
Described as "Tintin meets Brian Cox," Mysteries of the Quantum Universe is a graphic novel about the explorations of a researcher, Bob, and his dog Rick, as they investigate some of the weirdest corners of quantum physics -- and present it at a level that is accessible (and extremely entertaining) to the layperson.  The author Thibault Damour is a theoretical physicist, so his expertise in the cutting edge of physics, coupled with delightful illustrations by artist Mathieu Burniat, make for delightful reading.  This one should be in every science aficionado's to-read stack!
[Note: if you purchase this book using the image/link below, part of the proceeds goes to support Skeptophilia!]