The reawakening of Merlin

A couple of weeks ago I wrote a post about a site in Hertfordshire, England called "Arthur's Seat" that has long been associated with the famous (but possibly mythical) sixth-century king, but which dates from Neolithic times -- over four millennia earlier.

The difficulty with teasing out fact from fiction, when there are scant contemporaneous written records of any reliability, is apparent.  A good many historians think that Arthur is based on a real person, who was a Celtic (or Celto-Roman) chieftain and fought against the first invasions of the Saxons, but the phrase "based upon" is being used in the loosest possible sense.  How many of the other figures in the Arthurian Legend cycle -- Guinevere, Lancelot, Galahad, Gawain, the Knights Who Say "Ni" -- were even within hailing distance of reality is unknown, and probably unknowable.

Of course, there are always new discoveries being made, even in an extensively-researched place like England.  The most recent, and the reason the topic of Arthur comes up (again), is a manuscript found in an archive in Bristol, which I found out about because of my friend Gil Miller, who is a frequent contributor to Skeptophilia.

The manuscript dates from the middle of the thirteenth century, and has a few interesting features.  The text is very similar to known copies of the Lancelot-Grail Cycle, which formed the basis of Thomas Malory's famous Le Morte d'Arthur.  It has a few curious differences, though, particularly surrounding the relationship between Merlin and Viviane (also called Nimué) -- the Lady of the Lake. 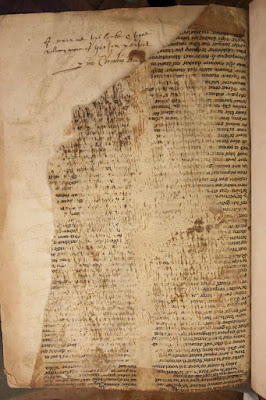 A piece of the Bristol manuscript

In most copies of the Lancelot-Grail Cycle, Viviane writes magic words on her groin, and this binds Merlin to her will, inducing him to have sex with her and teach her all of his knowledge.  Once she's had her way with him as much as she wants and has learned everything she can from him, she puts him into a charmed sleep -- this prevents him from assisting King Arthur in his fight at the Battle of Camlann against his villainous nephew Mordred (or Modred or Medraut), resulting in the deaths of both Arthur and Mordred.  Afterward, Merlin is fated to sleep "until Britain needs him again," at which he'll awaken and use his magic to save the day and make up for allowing Arthur to die. 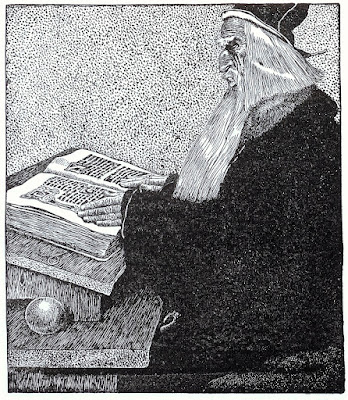 Merlin, from Howard Pyle's illustrations for The Story of King Arthur and His Knights (1903) [Image is in the Public Domain]

The new version takes out some of the more risqué bits.  Viviane inscribes the magic words on a ring instead of on her skin, and Merlin is simply bewitched rather than doing the deed with her.  The outcome is the same -- Merlin gets put into a charmed sleep -- but otherwise, the Bristol fragments have been cleaned up a bit by the prudish sorts.  Here's the passage from one of the standard sources:

And the girl [Viviane] made Merlin lie down in her lap, and she started to ask him questions.  She moved around him, and seduced him again and again until he was sick with love for her.  And then she asked him to teach her how to put a man to sleep.  And he knew very well what she was planning, but nevertheless, he could not prevent himself from teaching her this skill, and many others as well, because Our Lord God wanted it this way.  And he taught her three names, which she inscribed on a ring every time that she had to speak to him.  These words were so powerful that when they were imprinted on her, they prevented anyone from speaking to her.  She put all of this down in writing, and from then on, she manipulated Merlin every time that he came to talk to her, so that he had no power over her.  And that is why the proverbs say that women have one more trick than the devil.

What I find interesting about the new manuscripts is that from handwriting analysis, they were written in northern France -- but an annotation in the margin has been identified as an English script style used in the early fourteenth century, so the manuscript somehow made its way to England only a few decades after it was written.

Interesting as it is, it doesn't improve our knowledge from a historical perspective.  The Bristol manuscripts were still written a good seven centuries after Arthur's time, and don't add anything much to the legend, unless you count whether or not Merlin had sex with Viviane.  Back in the British "Dark Ages" -- between the exit of Rome in the fourth century and the consolidation of the Saxon kingdoms in southern and eastern England in the seventh century -- there were damn few records of any kind being kept, and whatever there was didn't survive.  We're relying on folk histories (which intermingle history with legend and mythology) and records that were written way after the fact.

So the sad truth is, we'll probably never know which bits of the story were true and which were not.

But it's still a cool discovery.  I had no idea how much handwriting analysis tells scholars; I didn't realize that it was distinct enough as to time and place that you could confidently say "this was written in northern France in around 1250."

But all I can say is, if Merlin is still in his magical sleep, it's probably time for him to wake up.  I know a few places other than Britain that could use some help from a powerful benevolent wizard.  So if Viviane reads this, allow me to say: Enough already.