It's been a while since I've posted on anything of a purely etymological nature, which is kind of a shame.  I'm a bit of a fanatic for words, especially odd words with curious origins.  This has the result that a trip to a dictionary or encyclopedia is never quick for me.  I go to look something up, get distracted by another entry, and then that reminds me of something else to look up, and I'm off on a two-hour birdwalk when I had intended to spend five minutes looking up a definition.  Ah, the pain of being a language nerd. 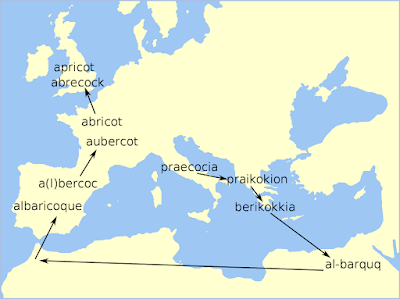 Speaking of birdwalks: the word "apricot" has taken a rather circuitous path to get to English.  Who knew?  [Image licensed under the Creative Commons Ian Alexander, Apricot Etymology Map, CC BY-SA 4.0]
A couple of days ago, I was talking to a friend and referred to an individual as being a "muckety-muck," and I was immediately accused of making that word up.  I protested that I did not do any such thing.  I've heard the expression "high muckety-muck" since I was a kid; it was one of my mom's pet expressions for someone who was in charge and whose assumption of the mantle of responsibility had turned him/her into a puffed up, arrogant twit.  Now, I was up front with my friend that it was entirely within the realm of possibility that my mom made it up, but that I'd see if I could find out for sure.  So I went to the Linguists' Bible -- the Oxford Dictionary of English Etymology -- and lo and behold, she didn't.

The term apparently comes from the trade language Chinook, which was a composite pidgin used by members of various tribes in the Pacific Northwest to communicate, since their home languages were mutually unintelligible.  The Chinook phrase hiu mukamuk, meaning "a man with plenty to eat," got brought into English as "high muckety-muck" with the overtones of someone using his affluence or influence for self-aggrandizement.

I've always found such things fascinating, and so I have become something of a collector for obscure word origins.  I still haven't lived down with my family members the fact that I knew that "juggernaut" came from the name of a god in Hindi (Jaganath), and therefore is not a half-cognate to "astronaut" (which comes from Latin words meaning "star sailor").  The fact that "ignorant" and "agnostic" are cognates always makes me smile a little, and probably would bring an outright laugh from any religious folks -- "i" and "a" both mean "not," and gnosis is the Greek word for "knowledge."  To fire a salvo in the other direction, however, remember that the stock phrase of the stage magician, "hocus pocus" (originally "hocus pocus dominocus"), comes from the Latin phrase hoc est corpus domini -- "This is the Body of the Lord," the words used during the Catholic mass before communion.  Ha.  Take that.

My tendency to lose focus as soon as I open up the ODEE means, however, that looking up a word origin never proceeds in a straight line.  During my recent zigzag path through the Oxford, for example, I discovered another type of cloth that comes from a Middle Eastern city name.  I knew that "gauze" comes from Gaza, and "damask" comes from Damascus, but who knew that "muslin" came from Mosul?  Not me, or not until this week.

And then, there's my favorite new word, which I will find a way to work into a conversation soon.  "Ingurgitate."  Meaning "to swallow greedily."  From the Latin gurges, meaning "whirlpool."

I also stumbled upon "bumble-puppy."  This charming word doesn't refer to a particularly clumsy dog, but (direct quote), "an unscientific game of whist."  This then necessitated looking up what "whist" was, and I gather from the definition of that word that it's a kind of card game (whose name, apparently, comes from Old Norse).  Card games generally make as much sense to me as integral calculus does to a second grader, so I doubt I'd be able to tell a scientific from an unscientific game of whist in any case.  ("Bumble-puppy" itself, I hasten to add, was marked "origin unknown.")

Then I found that "coracle" -- a little round boat -- wasn't a Latin word, as I expected from the "-acle" ending -- it's from the Welsh cwrwgl, meaning, of all things, "a little round boat."  The Welsh word looks unpronounceable to folks who don't speak the language, but it bears mention that /w/ is a vowel in Welsh (pronounced a bit like the vowel sound in the word "moon").  So cwrwgl would be pronounced "cooroogul" -- making the connection to "coracle" a little more obvious.

And last -- the first recorded use of the word "meringue" was in an English manuscript in 1706.  Sounds French, doesn't it?  I'd have thought so.  I guess it's not, or at least doesn't appear to be.  The ODEE puts it in with "bumble-puppy" as "origin unknown," and given that its first attestation is in England in the early eighteenth century, a French origin doesn't seem likely.

Honestly, none of this information is of the slightest use, but it's amusing and curious, and that's enough for me any day.  Can't be deathly serious all the time, or even most of the time.  Remember that next time you're playing a fast-moving game of bumble-puppy while ingurgitating meringue.
*********************************
My friends know, as do regular readers of Skeptophilia, that I have a tendency toward swearing.
My prim and proper mom tried for years -- decades, really -- to break me of the habit.  "Bad language indicates you don't have the vocabulary to express yourself properly," she used to tell me.  But after many years, I finally came to the conclusion that there was nothing amiss with my vocabulary.  I simply found that in the right context, a pungent turn of phrase was entirely called for.
It can get away with you, of course, just like any habit.  I recall when I was in graduate school at the University of Washington in the 1980s that my fellow students were some of the hardest-drinking, hardest-partying, hardest-swearing people I've ever known.  (There was nothing wrong with their vocabularies, either.)  I came to find, though, that if every sentence is punctuated by a swear word, they lose their power, becoming no more than a less-appropriate version of "umm" and "uhh" and "like."
Anyhow, for those of you who are also fond of peppering your speech with spicy words, I have a book for you.  Science writer Emma Byrne has written a book called Swearing Is Good for You: The Amazing Science of Bad Language.  In it, you'll read about honest scientific studies that have shown that swearing decreases stress and improves pain tolerance -- and about fall-out-of-your-chair hilarious anecdotes like the chimpanzee who uses American Sign Language to swear at her keeper.
I guess our penchant for the ribald goes back a ways.
It's funny, thought-provoking, and will provide you with good ammunition the next time someone throws "swearing is an indication of low intelligence" at you.
[Note: if you purchase this book using the image/link below, part of the proceeds goes to support Skeptophilia!]