It seems like every day I'm forced to face the unfortunate fact that I don't seem to understand my fellow humans very well.

All I have to do is to get on social media or -- worse -- read the news, and over and over again I think, "Why in the hell would someone do that?"  Or say that?  Or think that?  Now, I hasten to add that it's not that I believe everyone should think like me; far from it.  It's more that a lot of the stuff people argue about are either (1) matters of fact, that have been settled by science years ago, or (2) matters of opinion -- taste in art, music, books, food, television and movies, and so forth -- despite the fact that "matters of opinion" kind of by definition means "there's no objectively right answer."  In fact, at its basis, this penchant toward fighting endlessly over everything is a good first choice for "things I completely don't understand about people."

As an aside, this is why the thing I keep seeing on social media that goes, "What is your favorite _____, and why is it _____?" is so profoundly irritating.  (The latest one I saw, just this morning: "What is your favorite science fiction novel, and why is it Dune?")  I know it's meant to be funny, but (1) I've now seen it 873,915 times, and any humor value it might have started with is now long gone, and (2) my reaction every time is to say, "Who the fuck do you think you are, telling me what my favorite anything is?"

So, okay, maybe I need to lighten up a little.

Anyhow, this sense of mystification when I look around me goes all the way from the deeply important (e.g., how anyone can still think it's okay to smoke) to the entirely banal (e.g. people who start brawls when their favorite sports team loses).  A lot of things fall somewhere in the middle, though, and that includes the article I ran into a couple of days ago showing that people will pay significantly more for a house if it's supposedly haunted. 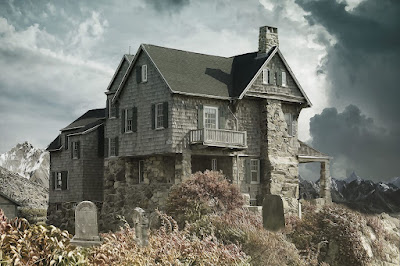 The data, which came from the British marketing firm InventoryBase, looked at the prices people were willing to pay to purchase a house with an alleged ghost (or one that has a "bad reputation").  And far from being a detriment to selling, a sketchy past or resident specter is a genuine selling point.  Comparing sales prices to (1) the earlier purchase price for the same property, adjusted for inflation, and (2) the prices for comparable properties, InventoryBase found that the increase in value is significant.  In fact, in some cases, it's freakin' huge.

Doesn't take a movie to make the price go up.  "The Cage," a house that was the site of a medieval prison in the village of St. Osyth in Essex, England, has been called one of the most haunted sites in Britain -- and is valued at 17% higher than comparable properties.  Even more extreme is 39 DeGrey Street in Hull, which has a 53% higher appraisal value than comparables -- despite the fact that the house has a reputation for such terrifying apparitions that "no one is willing to live in it."

InventoryBase found several examples of houses that were objectively worse than nearby similar homes -- badly in need of remodeling, problems with plumbing or wiring or even structure, general shabbiness -- but they still were selling for more money because they allegedly have supernatural residents.

I read this article with a sense of bafflement.  Now, to be fair, I'd be thrilled if it turned out my house actually was haunted, primarily because it would mean that my current opinion about an afterlife was wrong.  The problem is, at the same time I'm a great big coward, so the first time the ghost appeared I'd probably have a brain aneurysm, but at least then I could look forward to haunting the next resident, which could be kind of fun.

But if I was in the market for a house, it's hard for me to fathom spending tens (or hundreds) of thousands of dollars extra for the privilege of sharing my house with ghosts.  No, for the privilege of supposedly sharing my house with ghosts; I'm guessing in the Disclosure Statement there's no requirement for anyone to prove their house is actually haunted.  So I'd potentially be spending a year's worth of salary (or more) just for unsubstantiated bragging rights.

Anyhow, this brings me back to where I started, which is that I just don't understand my fellow humans.  A great deal of their behavior is frankly baffling to me.  Given how poorly I fit in with my blood relatives -- "black sheep of the family" doesn't even come close to describing it -- I've wondered for years if I might be a changeling.  The problem with that hypothesis is that I look exactly like my dad, so any contention that I'm not really his son is doomed to be shipwrecked on the rocks of hard evidence.

And like I said, it's not that I think my own view of the world is sacrosanct, or something.  I'm sure I'm just as weird as the next guy.  It's just that the ways I'm weird seem to be pretty different from the ways a lot of people are weird.

So maybe I shouldn't point fingers.  Other folks are weird; I'm weirdly weird.  Weird to the weirdth power.  This means that people are probably as mystified by my behavior as I am by theirs, which I guess is only fair.