They're known as "water bears," a name given to them by their discoverer, Johann August Ephraim Goeze, in 1773.  (In German, kleiner Wasserbär, which I think sounds even more charming.)  They've also been called "moss piglets" because they're frequently found in damp patches of moss; tardigrade itself means "slow stepper," from the cautious, almost stealthy, movements of their eight limbs. 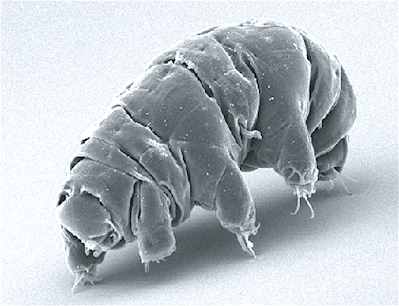 Most people who know about tardigrades found out about them because of their peculiar reluctance to die.  They can withstand conditions that damn near no other life form on Earth can survive.  They've made it through a few minutes at 151 C (fifty degrees above the boiling point of water) and at -272 C, which is one degree above absolute zero.  They positively sneer at more moderate temperatures; tardigrades have survived for thirty years at -20 C.  They've lived through being in a near-vacuum and being subjected to pressures six times what exists at the bottom of the Marianas Trench.  They have a radiation tolerance at least a thousand times higher than your average animal, can survive dehydration for ten years or more, and have lived through momentary impact pressures of 1.14 gigapascals -- the equivalent of being smacked by an object moving at nine hundred meters per second.

So to hell with cockroaches and rats.  If there's some global cataclysm, tardigrades will rule the Earth.

Tardigrades aren't particularly closely related to any other group, but seem to have a distant relationship to arthropods (insects, spiders, crustaceans, and so on) and onychophores (velvet worms).  (What is certain is that they have no connection to bears or piglets.)  Their lineage has been on its own for a long time -- no one knows for sure how long, but tardigrade fossils have been found in deposits from Siberia dating from the mid-Cambrian Period, something on the order of five hundred million years ago.

So these peculiar little creatures have been trundling their way around the world for half a billion years.

The topic comes up because of a link sent to me by the sharp-eyed Gil Miller, that describes a recent discovery of a tardigrade fossil in sixteen-million-year-old amber from the Dominican Republic.  Tardigrades are extremely rare as fossils; the main reason is that they're tiny -- between 0.1 and 1.5 millimeters in length, depending on the species.  Trying to find the remains of something that small is tricky, to say the least.  In fact, the recent discovery was from amber that had been the subject of study for several months because it also contained the fossils of three different prehistoric ant species.  But once discovered, it became clear quickly that it was an extraordinary find, not least because it turned out to be not only a new species, but an entirely new genus.  It was christened Paradoryphoribius chronocaribbeus; that mouthful comes from para- ("next to") and doryphorbius (the name of another genus of tardigrades that the new discovery is related to -- the name comes from the Greek words meaning "spear bearer"); the species name chronocaribbeus means, more or less, "Caribbean critter from a long time ago."

"The discovery of a fossil tardigrade is truly a once-in-a-generation event," said Phil Barden of the New Jersey Institute of Technology, who was senior author of the study.  "What is so remarkable is that tardigrades are a ubiquitous ancient lineage that has seen it all on Earth, from the fall of the dinosaurs to the rise of terrestrial colonization of plants.  Yet, they are like a ghost lineage for paleontologists with almost no fossil record.  Finding any tardigrade fossil remains is an exciting moment where we can empirically see their progression through Earth history."
So a more-or-less accidental discovery from a piece of amber is shedding some light on the evolutionary history of one of the most peculiar groups of animals on Earth.  I have to admit, when I read the first few paragraphs of the article, I was half expecting they'd say, "And we broke open the amber... and the tardigrade came back to life."  Kind of disappointed, I must admit.  But I guess even for a survivor like the tardigrades, being stuck in hardened pine sap for sixteen million years is a lot to endure.
**********************************
During the first three centuries C.E., something remarkable happened; Rome went from a superpower, controlling much of Europe, the Middle East, and North Africa, to being a pair of weak, unstable fragments -- the Western and Eastern Roman Empires --torn by strife and internal squabbles, beset by invasions, with leaders for whom assassination was the most likely way to die.  (The year 238 C.E. is called "the year of six emperors" -- four were killed by their own guards, one hanged himself to avoid the same fate, and one died in battle.)
How could something like this happen?  The standard answer has usually been "the barbarians," groups such as the Goths, Vandals, Franks, Alans, and Huns who whittled away at the territory until there wasn't much left.  They played a role, there is no doubt of that; the Goths under their powerful leader Alaric actually sacked the city of Rome itself in the year 410.  But like with most historical events, the true answer is more complex -- and far more interesting.  In How Rome Fell, historian Adrian Goldsworthy shows how a variety of factors, including a succession of weak leaders, the growing power of the Roman army, and repeated epidemics took a nation that was thriving under emperors like Vespasian and Hadrian, finally descending into the chaos of the Dark Ages.
If you're a student of early history, you should read Goldsworthy's book.  It's fascinating -- and sobering -- to see how hard it is to maintain order in a society, and how easy it is to lose it.
[Note: if you purchase this book using the image/link below, part of the proceeds goes to support Skeptophilia!]