No matter how long you've been interested in a subject, there's always more to learn.

That's why I was delighted to run into an article yesterday in Science Advances describing the discovery of a "Lagerstätte" from Australia.  The paper had the word "Miocene" in it and was full of photographs of fossils, so I figured it must have something to do with paleontology, even though Lagerstätte sounds like a place to hide beer.

Actually, as a brief etymological aside, the word does share a common root with lager beer.  Lagerstätte is German for "storage place" and refers to a paleontological site full of fossils showing exceptionally fine preservation; the beer name comes from Lagerbier ("stored beer"), so named because it was cold-fermented after storage in a cool, dark place.  So as unlikely as it sounds given their definitions, the two words share a common root.

Anyhow, this particular Lagerstätte (dammit, now that I've learned the word, I'm gonna use it) is in a spot called McGraths Flat, about twenty-five kilometers northeast of the town of Gulgong (itself about three hundred kilometers northwest of Sydney).  What is most remarkable about it is not only the exceptional state of preservation of the fossils -- down to the soft parts that usually don't fossilize well -- but the range of organisms represented, all the way from microorganisms and spores up to flowers, fruit, leaves, and branches of dozens of different species of plants, insects and spiders, fish, and even the feather of a bird (of unknown species, but probably something sparrow-sized).  Like the other fossils, the feather is amazingly well-preserved -- enough that you can still see the feather's melanosomes, the pigment-bearing cells, the arrangement of which allowed the researchers to conclude that the bird it came from was dark-colored and iridescent, like today's grackles and starlings.

The site dates to about fourteen million years ago, putting it squarely in the middle of the Miocene Period.  The Miocene was an interesting time, geologically and climatically.  It's the period that saw the collision of the Indian subcontinent with Eurasia, raising the Himalayas, as well as enough subduction off the western coast of South America to fuel the developing volcanoes of the Andes Range.  Even more dramatic was the eruption of the Columbia River Flood Basalts in what is now eastern Washington and eastern Oregon, releasing enough lava that it filled up the valleys east of the Cascades like water filling a bathtub.  (The Columbia River Formation is not only the most recent flood basalt province, but -- amazingly -- the smallest; it's dwarfed by both the Siberian Traps and the Deccan Traps, which are thought to have played a large role in the Permian-Triassic and Cretaceous Extinctions, respectively.)

Interestingly, it's an Eocene Period basalt deposit that seems to be what allowed for the phenomenal state of preservation at McGraths Flat.  Around 37 million years ago -- so, 23 million years before the lowland swampy forest that eventually became the Lagerstätte -- there was an eruption of iron-rich basalt nearby, and by the mid-Miocene the rock was eroding.  The seep water became a nearly saturated solution of goethite (iron oxide-hydroxide), which then precipitated in fine layers over the organic remains, producing fossils with a level of detail you rarely ever get to see. 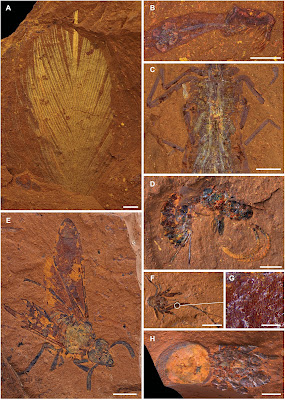 A few of the amazing fossils from McGraths Flat (New South Wales, Australia).  The one in the upper left is the bird feather, one of the few vertebrate fossils identified.

The climate worldwide at the time was largely warm and dry, although throughout the period there was a cooling trend which would ultimately lead to the Pliocene and Pleistocene Ice Ages.  The habitat at McGraths Flat, though, was thought to be wetter than average -- probably similar to today's lowland forests in places like New Zealand.  The plants weren't so different from what you find today; eucalyptus, acacia, casuarina, various members of the Protea, Myrtle, and Laurel families.  Transported back there, you probably wouldn't notice a great deal of difference from what you see today.  A botanist would recognize that the species were different from modern ones -- but by fourteen million years ago, the families of plants and animals would be substantially the same ones you find in eastern Australia now.

Reduced precipitation in the Miocene triggered the geographic contraction of rainforest ecosystems around the world.  In Australia, this change was particularly pronounced; mesic rainforest ecosystems that once dominated the landscape transformed into the shrublands, grasslands, and deserts of today.  A lack of well-preserved fossils has made it difficult to understand the nature of Australian ecosystems before the aridification.  Here, we report on an exceptionally well-preserved rainforest biota from New South Wales, Australia.  This Konservat-Lagerstätte hosts a rich diversity of microfossils, plants, insects, spiders, and vertebrate remains preserved in goethite.  We document evidence for several species interactions including predation, parasitism, and pollination.   The fossils are indicative of an oxbow lake in a mesic rainforest and suggest that rainforest distributions have shifted since the Miocene.  The variety of fossils preserved, together with high fidelity of preservation, allows for unprecedented insights into the mesic ecosystems that dominated Australia during the Miocene.

This discovery gives us an astonishingly vivid picture of a landscape from fourteen million years ago -- all because of a fortuitous nearby rock formation.  It also gives us an excuse for using the word Lagerstätte when talking to our friends, which I hope you all will.  I definitely am gonna.  Which probably explains why so many people suddenly realize in mid-conversation with me that they have pressing engagements elsewhere.