It's all becoming clear

The phenomenon of transparency is way more interesting than it appears at first.

I remember thinking about the concept when I was a kid, the first time I watched the classic horror/science fiction film The Invisible Man.  Coincidentally, I was in high school and was in the middle of taking biology, and we'd recently learned how the human eye works, and Claude Rains's predicament took on an added layer of difficulty when it occurred to me that if he was invisible -- including his retina -- not only would we not be able to see him, he wouldn't be able to see anything, because the light rays striking his eye would pass right through it.  Since it's light being absorbed by the retina that stimulates the optic nerve, and Rains's retinas weren't absorbing any light (or we'd have seen them floating in the air, which is kind of a gross mental image), he'd have been blind.

So an invisibility potion isn't nearly as fun an idea as it sounds at first.

It wasn't until I took physics that I learned why some objects are transparent, and why (for example) it's harder to see a glass marble underwater than it is in the air.  Transparency results from a molecular structure that neither appreciably absorbs nor scatters light; more specifically, when the substance in question has electron orbitals spaced so that they can't absorb light in the visible region of the spectrum.  (If not, the light passes right through it.)  Note that substances can be transparent in some frequency ranges and not others; water, for example, is largely transparent in visible light, but is opaque in the microwave region -- which is why water heats up so quickly when you put it in a microwave oven.

The second bit, though, is where it really gets interesting.  Why are some transparent objects still clearly visible, and others are nearly invisible?  Consider my example of glass in air as compared to glass under water.  You can see through both, but it's much harder to discern the outlines of the glass underwater than it is in air.  Even more strikingly -- submerge a glass object in a colorless oil, and it seems to vanish entirely.

The reason is something called the index of refraction -- how much a beam of light is bent when it passes from one transparent medium to another.  A vacuum has, by definition, an index of refraction of exactly 1.  Air is slightly higher -- 1.000293, give or take -- while pure water is about 1.333.  The key here is that the more different the two indices are, the more light bends when crossing from one to the other (and the more the light tends to reflect from the surface rather than refract).  This is why the boundary between air and water is pretty obvious (and why those amazing photographs of crystal-clear lakes, where you can see all the way to the bottom and boats appear to be floating, are always taken from directly overhead, looking straight down; even at a slight angle from perpendicular, you'd see the reflected portion of the light and the water's surface would be clearly visible).

Likewise, the more similar the indices of refraction are, the less light bends (and reflects) at the boundary, and the harder it is to see the interface.  Glass, depending on the type, has an index of refraction of about 1.5; olive oil has an index of 1.47.  Submerge a colorless glass marble in a bottle of olive oil, and it seems to disappear,

The reason all this comes up has to do with the evolution of transparency in nature -- as camouflage.  It's a pretty clever idea, that, and is used by a good many oceanic organisms (jellyfish being the obvious example).  None of them are completely transparent, but some are good enough at index-of-refraction-matching that they're extremely hard to see.  It's much more difficult for terrestrial organisms, though, because air's lower index of refraction -- 1, for all intents and purposes -- is just about impossible to match in any conceivable form of living tissue.

Some of them come pretty close, though.  Consider the "skeleton flower," Diphylleia grayi, of Japan, which has white flowers that become glass-like when they're wet: 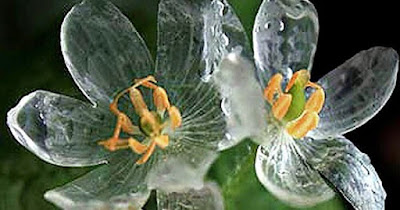 The transparency of the flower petals is likely to be a fluke, as it's hard to imagine how it would benefit the plant to evolve a camouflage that only works when the plant is wet.  An even cooler example was the subject of a paper in the journal eLife last week, and looked at a group of butterflies called (for obvious reasons) "glasswing butterflies."  These are a tropical group with clear windows in their wings -- but, it turns out, they're not all closely related to each other.
In other words, we're looking at an example of convergent evolution and mimicry.
The study found that some of the clear-wings are toxic, and those lack an anti-glare coating on the "windows."  This makes the light more likely to reflect from the surface, rather than pass through; think about the glare from a puddle in the road on a sunny day.  Those flashes of light act as a warning coloration -- an advertisement to predators that the animal is toxic, distasteful, or dangerous. 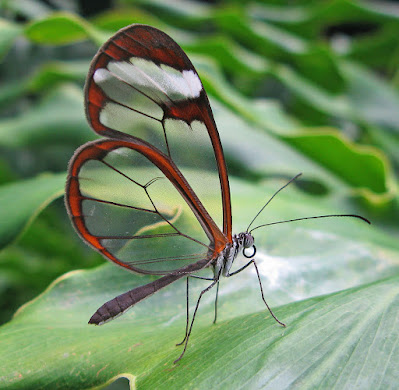 The coolest part of last week's paper was in looking at the mimics; the species that had the transparent windows but weren't themselves toxic.  Unlike the toxic varieties, those species had evolved anti-glare coatings on the windows, so the mimicry was obvious in bright light -- but in shadow, the lack of glare made them seem to disappear completely.  In other words, the clear parts act as a warning coloration in sunshine, and as pure camouflage in the shade!

Even more amazing is that a number of only distantly-related species have stumbled on the same mimicry -- so this particular vanishing act has apparently evolved independently more than once.  A good idea, apparently, shouldn't just be wasted on one species.

So that's today's cool natural phenomenon, which I hope I've clarified sufficiently.  There seems truly to be no end to the way living things can take advantage of physical phenomena for their own survival -- as Darwin put it, to generate "endless forms most beautiful and most wonderful."