It must be awfully convenient to start out from the baseline assumption that everyone who disagrees with you is wrong.

This observation comes about because Thursday was International Holocaust Remembrance Day, and I posted the following on Facebook: "On this Holocaust Remembrance Day, I'm thinking about our cousins, Armand Simon, Céline (Bollack) Simon, and Irène Simon, and Baila Dvora (Bloomgarden) Serejski, Avish Serejski, Tsipe Serejski, and Sholem Serejski, who died at the hands of the Nazis in Auschwitz.  May they never be forgotten."  I also appended a link to a post I did five years ago about the Simon family, who were part of the French Resistance.

Most of the responses were wonderful, but one person, a cousin of mine, wrote the following:

I could never understand how everyday people went along with packing their possessions up and moving to the ghetto thinking how could it get worse?  And yet it became much worse.  I see this going on in our country today.  When we visited Hawaii last March to see our daughter who was living there, we had to get a specific COVID test to enter the state.  And it was negative.  But when we got there, it wasn’t from the lab approved by their Governor and we were hauled into an area for “processing”.  They called our hotel and we’re going to force us in a 14 day quarantine - they wouldn’t even look at our antigen test results!  And we went to a lab at the airport recommended by our airline.  Well I refused to pay for a resort and be forced to stay in a hotel room for 14 days, so we told them we would stay at our daughter’s apartment.  I wasn’t about to give this state a penny of our money and be under their control.  When I said to the lady at the airport Aloha, Welcome to Hawaii - she replied, "We don’t want you here."  I felt like we were no longer in the USA.  And you should see all the homeless in Hawaii because the Governor there shut down all the businesses - tents everywhere. For a state that relies on tourism as a huge part of their livelihood- this was beyond stupid.  Many people in the tourist industry had to move to the mainland and those that couldn’t afford to, now had to live on the streets.  And now you can’t go in restaurants or bars unless you have a vaccine passport.  I have a bad reaction to vaccines so I’m not about to get that shot and it’s my body - nobody should be forced to have to take an injection - EVER!  Our country is FUBAR.  Thank God we live in Florida and our Governor is the best combination of intelligence and common sense.  To think I have to check which states I can travel to is unconscionable.  Our country is on a very bad path as a whole. We can only hope that at some point there will be a mass resistance.

When someone pointed out that it was out of line to compare being mildly inconvenienced on your Hawaii vacation to six million people being systematically killed by the Nazis, she responded:

My point was definitely not a comparison. My point is that we are like the frog and boiling water theory if we don’t pay attention to our gradual loss of freedoms. And that is exactly what is taking [sic] with President Numbnuts in office right now.

And damn straight I am in the right state. I would appreciate if all the people flocking here from Democrat states would stay the hell out unless they have the intelligence to know why they want to be here. Don’t come here and ruin our freedom!

This, of course, isn't the first thing like this she's posted; it's just the first one directed at me.  She's had gems like a diatribe starting out "All Democrats are pinheads," implying that one-half of the American public are hopelessly stupid.  No need to know anything else about them; Democrat = idiot.  Done thinking.

I honestly can't comprehend this level of confident arrogance.  One of my (many) besetting sins is that I'm almost never 100% sure of anything; to me, most of the world is made up of gray areas, ambiguity, and extenuating circumstances.  But my cousin's attitude goes way beyond being sure of oneself.  Confidence and a strong trust in your own beliefs and principles are just fine; in her, it has morphed into a conviction that the people who share her beliefs are the only ones worth listening to.

It's a scary position to be in.  I wrote a couple of years ago about how absolutely essential it is to keep in mind that your opinion could be based in error -- and cited some research showing that this willingness to consider our own fallibility is essential in science.  (I'd argue that it's essential in damn near everything.)

It reminds me of what Kathryn Schulz said, in her amazing TED Talk "On Being Wrong:"

It's like we want to believe that our minds are these perfectly transparent windows, and we just gaze out of them and describe the world as it unfolds.  And we want everybody to gaze out of the exact same window and see the exact same thing...  If you want to rediscover wonder, you have to step outside of that tiny, terrified space of rightness -- and look around at each other, and look at the vastness and complexity and mystery of the universe, and be able to say, "Wow.  I don't know.  Maybe I'm wrong."

I chose not to try to argue with her.  Maybe that was the cowardly choice, but my impression is that it would have been entirely futile.  Once you've landed in that position -- believing that everyone who disagrees with you is either misinformed, stupid, or lying outright -- you're kind of stuck there.  I don't shy away from an argument when there's ground to be gained, or at least when both sides are listening; but this person has so locked herself in an echo chamber that it's pointless even to engage.

If what I really crave is slamming my head into a wall, it'd be easier and quicker just to go find a wall and do it. 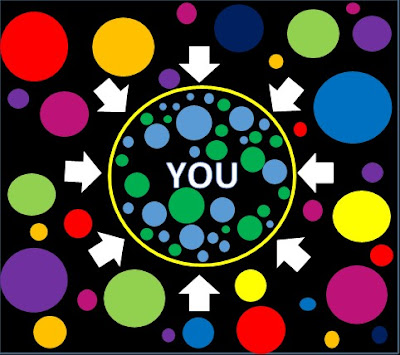 In any case, I just decided to disconnect.  I'm kind of done posting on social media.  I'll still throw links to Skeptophilia on Facebook and Twitter every day, and probably will continue to post the occasional pic of my dogs on Instagram, but other than that, I've kind of had it.  I'm just weary unto death of the vitriol -- when you can't post a tribute to relatives who died in the Holocaust without it turning into a Fox News-inspired extremist screed, it's a sign that the platform itself is no longer worth the time and anguish.  And I unfriended my cousin (reducing the number of my blood relatives who still want to have anything to do with me to "almost one"), because I know about her that one of her mottos is "Death before backing down."  Interacting with someone like that isn't worth the toll it takes on me personally.

What that says about the state of affairs in the United States today is scary, though.  The media found out a couple of decades ago that polarization and agitation gets viewers, and has whipped up the partisan rancor to the point that each side thinks the other is actively evil.  It's kind of ironic that the whole nasty exchange started because of a post about the Holocaust, though.  It reminds me of the trenchant quote -- attributed incorrectly to Werner Herzog, and actually of unknown provenance -- "Dear America, you are waking up, as Germany once did, to the awareness that one-third of your people would happily kill another one-third, while the remaining one-third stands there watching."