The legion of ghosts

One of the questions I get asked the most often, in the context of skepticism and critical thinking, is, "What would it take to change your mind about the paranormal?"

My answer is that all it would take is one piece of hard evidence, observed under controlled conditions by unbiased researchers, that wasn't explainable by means of known, natural causes.

This may seem overly rigorous, and nothing more than a reason to discount all claims of the supernatural and forthwith stop thinking about any of it.  But really, what else could I say?  I've seen too many instances of people trying to be fair but honestly misinterpreting the evidence, as well as people exaggerating claims, relying on nothing but personal anecdote, falling victim to confirmation bias and dart-thrower's bias, or -- worst -- simply making shit up.

The difficulty, of course, is that some of those claims (well, not the last kind, obviously) might be true.  So how could we tell?  Might I, and other hard-headed skeptics, be discounting real phenomena in an overzealous attempt to winnow out the wheat from the chaff?

Let's look at one example that has some interesting features, and see if there might be something to it -- or if, as skeptics, we have to shrug our shoulders and put it in the "we dunno, but probably not" column.

One of the first big cities I spent any time in, on my first trip to England, was the lovely old city of York.  (I started out in Blackpool, but my general attitude was that the best thing you can do in Blackpool is get the fuck out of Blackpool.  No offense to any, um, Blackpudlians in the studio audience.)  Anyhow, like many old European cities, York plays host to a lot of claims of hauntings, and one of the most curious surrounds the Treasurer's House, near York Minster Cathedral.

The site has been the home of the Chief Treasurer of York Minster since the eleventh century, but of the original structure (and the first major overhaul, done in the twelfth), all that's left is one external wall and some masonry.  However, the house, in some form, has been continuously occupied since it was built in 1091, even if its original builders wouldn't recognize the place.

Where it gets interesting, from a paranormal perspective, is that the house was built right on top of one of the main roads used when Britain was a Roman province.  However, that's not as impressive as it sounds, when you consider how many Roman roads there are in England: 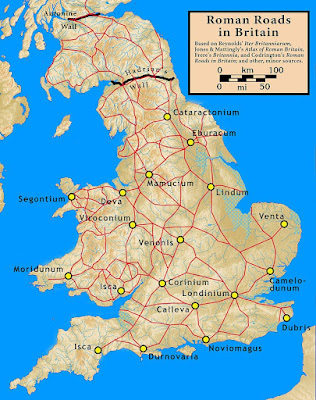 Eboracum, in the north part of England, is the Roman settlement that ultimately became the city of York. [Image licensed under the Creative Commons Roman.Britain.roads, CC BY-SA 3.0]

Be that as it may, apparently the old road runs right underneath the house's foundation, and excavation in the basement uncovered four marble pedestals from pillars dating to second-century Roman occupation, one of which was left in place and the other moved to become a base for a modern column in the main hall.

So this at least provides some basis -- if, perhaps, not credence -- to an apparition seen in the house's basement multiple times, most famously in 1953, when a plumber, Harry Martindale, was called in to work on installing a central heating system.  Martindale, so the story goes, was standing on top of a ladder when he heard a noise, and turning in the direction of its apparent source saw something horrifying -- a man on horseback wearing "Roman-looking armor" coming right through the wall.  The horseman was followed by a group of men wearing helmets, green tunics over red kilts, carrying round shields and either short swords or spears.  They looked, Martindale said, tired, dirty, dejected, and miserable.  Several of them appeared to be ill or wounded, and the implements they carried (one of which was a long metal trumpet) were battered and dented.

Martindale, understandably, fell off the ladder.  The soldiers appeared to take no notice of the terrified young man in their midst.

Weirdest of all was something that Martindale noticed, and initially thought simply their short stature; looking more closely, he saw that he wasn't seeing their entire bodies, but their legs were seemingly cut off mid-calf, as if they were wading through the floor and not walking on it.  When they reached an area that had been excavated as part of the heating project, he saw that their lower legs and feet were actually there -- it looked as if they were walking on a surface forty centimeters below the floor.  They were wearing leather sandals, he said, with straps winding around their calves almost to the knee.

As he watched, they approached the wall across the room and went right through it, and one by one, vanished.

Martindale, scared out of his wits, ran up the stairs, right into the house's curator, who took one look at the white-faced young man and said, "By the look of you, you've seen the Romans!"

So, that's the core of the story.  Now, for a closer look at what we know.

First, Martindale turns out to be a pretty credible witness, as such things go.  He left the plumbing business (I would have, too), became a policeman, and died in 2014.  He told the story many times, and never changed a single detail -- and, most interestingly, refused several lucrative offers of payment for interviews and television appearances.

Second, there's the thing about the ghosts (if such they were) walking through, not on, the basement floor.  Further excavations done after Martindale's experience found the remains of the old Roman road -- forty centimeters underneath the current floor.  The ghosts, true believers say, were unaware of their current surroundings (including, fortunately, Martindale himself) and were walking on the road as it was fifteen centuries ago.

Third -- one of the criticisms of Martindale's claim is that the battle equipment and dress were wrong -- for one thing, the shields used by the Roman armies in Britain were square, not round.  But according to several sources I've seen (including the ones linked) it was discovered much later that in the fifth century, at which point the Romans were getting the snot beat out of them by the Angles and Saxons and were in the process of evacuating the entire island, York was defended by not by regular army but by a group of reserves -- who would have been dressed and armed exactly the way Martindale described, including with round shields.

Okay, so what do we conclude about all this?

Here's the difficulty.  The legend of the ghostly legion was well known by then; witness the curator's reaction.  It's unlikely that Martindale knew nothing of the house's reputation.  So as reliable as most sources consider Martindale to be, we have to admit the possibility that either (1) he made it up for reasons unknown or (2) got spooked by the stories of the haunting and let his imagination get the better of him.

On the plus side of the ledger, though, are the details of the apparitions themselves.  You'd think if someone were to make up a story about seeing ghostly Roman legionaries, they'd be the more conventional way we picture them -- shining armor, plumed helmets, and so on.  The fact that they appeared to be coming from a battle where they'd been battered to smithereens is a curious twist, but certainly consistent of what we know was happening in the north of England in the fifth century.

Also an odd feature is the thing about walking on the old road surface rather than the current basement floor, which strikes me as something no one would think to make up.  And Martindale himself was not prone to wild fancies.  He was apparently a plain-spoken, solidly blue-collar man, not college educated, and not the kind you'd think of as a spinner of strange tales.  (If I, for example, were to claim there were ghosts in my basement, my being a speculative fiction author would clearly weigh against my credibility.  We authors can come up with some bizarre stuff sometimes.  Still, I have to add that if I were to come up with a hoax-ghost-sighting story, there's no way even I would have thought of having them walk on a buried road surface.)

Still, it remains that we only have anecdotal evidence to go by.  The cellar is not open to the public (although tours are give of the rest of the house), but a CCTV was set up there to see if any ghosts, Roman or otherwise, would show up -- and so far, has captured nothing.

So you can label me "unconvinced but interested."  I'm not going to jump to a supernatural explanation until we've ruled out all the natural ones, or better yet, when we have hard, scientifically-sound evidence.  I think it was said best by, of all people, C. S. Lewis, in the person of his hard-headed skeptical character Andrew MacPhee in That Hideous Strength: "If anything wants Andrew MacPhee to believe in its existence, I’ll be obliged if it will present itself in full daylight, with a sufficient number of witnesses present, and not get shy if you hold up a camera or a thermometer."