Well, I once again broke the Cardinal Rule of the Internet, namely: don't argue online with strangers.

This time, the source of the argument was the one and only television show I really obsess over, which is Doctor Who.  On Saturday, we watched the eagerly-awaited New Year's special, "Eve of the Daleks," and (IMHO) it was fantastic, easily one of the best in the last three seasons.

It was not only a nifty story with some really funny moments (especially from the character of Sarah, played with deft wit by the Irish comedienne Aisling Bea as the weary, snarky owner of the self-storage facility where the entire episode takes place), but it featured a revelation that got the fan base buzzing.  About 2/3 of the way through, we find out that the Doctor's companion Yaz (played by Mandip Gill) has fallen in love with the Doctor (currently in a female incarnation, played by Jodie Whittaker).  The scene is sweet and subtle, and Mandip Gill does a beautiful job expressing the painful difficulty many LGBTQ people have in admitting who they are (as Yaz says, even to herself). 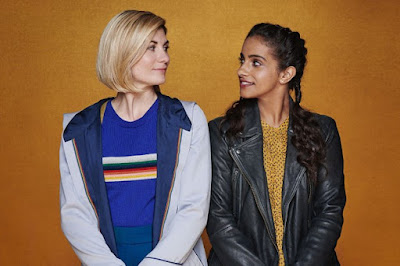 While it was a wonderful scene, to many Who fans it was hardly a surprise; there have been clues throughout the last two seasons that Yaz was falling for the Doctor.  Having it confirmed, however, was nice, and for queer fans of Who (myself very much included) it was a welcome sign of acceptance and representation of LGBTQ identity.

But then the backlash started.

I'm sure you can imagine it, so I'll only give you a handful of examples:

What gets me is it's gotten to be that any time some bigot sees something in a movie, television show, or book that pushes the cultural envelope, it's labeled as "virtue signaling" or "wokeness," and forthwith dismissed as a manipulative attempt by the writer to force an agenda.  They seem to see no difference between LGBTQ people and minorities appearing in a work of fiction, and a deliberate attempt to push an opinion -- as if merely being visible is an affront to their sensibilities.

I've run into this repeatedly myself, as an author.  I have been asked more than once why the characters of Dr. Will Daigle (in Whistling in the Dark and Fear No Colors) and Judy Kahn (in Signal to Noise) were written as LGBTQ.  I used to answer this question by going into how I create characters, but I finally ran out of patience -- now my tendency is to snap back, "Because queer people exist," and then watch the person squirm (which, at least, most of them have enough self-awareness to do).  Not once have I ever been asked why (for example) I made the character of Seth Augustine (in The Snowe Agency Mysteries) 100% straight.

Straight, apparently, is the default, and anything else is due to the author trying to make a point about how virtuous and woke (s)he is.

This is reminiscent of the furor that surrounded the choice of actress Jodie Turner-Smith (who is Black) to play the lead role in Channel 5's miniseries Anne Boleyn.  It wasn't historically accurate, people said; the real Boleyn was (of course) a White Englishwoman.  Conservative commentator Candace Owens, who never can resist an opportunity to throw gasoline on a fire, said that she had no problem with a Black Anne Boleyn "so long as the radical left promises to keep their mouth shut if in the future Henry Caville [sic] is selected to play Barack Obama and Rachel McAdams can play Michelle."

Which isn't just tone-deaf, it's a false equivalence ignoring the fact that for decades -- in fact, since the beginnings of cinematic history -- filmmakers have been doing exactly that.  Take, for example, the evil Chinese mastermind Fu Manchu, who has been played in movies and television by a long list of actors -- Christopher Lee, Boris Karloff, Warner Oland, Harry Agar Lyons, Henry Brandon, and John Carradine, to name a few.  Notice anything about this list?

Not one of them is Chinese.  In fact, Fu Manchu has never been played by a Chinese actor.

John Wayne played Genghis Khan in The Conqueror.  Yul Brynner played King Mongkut of Thailand in The King and I.  Laurence Olivier played Othello in the 1965 movie adaptation of the play.  It's not a thing of the distant past, however.  In 2007 Angelina Jolie played (real-life) Afro-Cuban journalist Mariane Pearl in A Mighty Heart.  Johnny Depp played Tonto in the 2013 movie The Lone Ranger -- although the character of Tonto isn't exactly a realistic portrayal of Native Americans anyhow, so maybe that one shouldn't count.  Worse, in 2016 White actor Joseph Fiennes played Michael Jackson in the movie Elizabeth, Michael, and Marlon.  Going back to Doctor Who, there's the 1977 episode "The Talons of Weng Chiang," which is not a bad story at its core but is rendered unwatchably cringe-y by White actor John Bennett's attempt to portray the Chinese bad guy Li H'sen Chang, and a script that bought into every one of the ugly "sinister Asian devils" stereotypes in existence.

What about the recent turning of the tables?  Could it be that some of the inclusion and representation, and some of the casting choices, were made as a deliberate attempt to prove a point?  I guess, but then you'd have to demonstrate to me how you knew what the intentions of the writers are.  If you don't know the writers made those decisions based upon a desire to appear "woke," then it's hard to see how you'd distinguish that from simply representing the diversity of people out there.  Or, in the case of Turner-Smith's portrayal of Anne Boleyn, that she was the best actress for the role.

But back to Yaz, the Thirteenth Doctor, and "Eve of the Daleks."  I've yet to hear anyone come up with a cogent reason why Yaz shouldn't be a lesbian.  And as far as Chris Chibnall's alleged attempt to force a "woke agenda" on us, allow me to point out that Doctor Who has been at the forefront of representation pretty much since the beginning of the modern era in 2005, with people of color playing major roles (to name only two of many examples, Freema Agyeman as companion Dr. Martha Jones, and Pearl Mackie as companion Bill Potts -- who was also queer).  The character of Captain Jack Harkness (played by John Barrowman) gave new meaning to "pansexual" by flirting with anyone and everyone, ultimately falling hard -- and tragically -- for a Welshman named Ianto Jones.  My favorite example, though, is the relationship -- not only queer but inter-species -- between the inimitable Silurian Vastra (Neve McIntosh) and her badass partner Jenny Flint (Catrin Stewart).

So if you don't like representation, stop watching the fucking show.  Because it's here to stay -- as it should be.

And I, for one, will cheer loudly if Yaz kisses the Doctor.  High time that happened.