An anthrope considers the strange case of couth and ruth

I noticed last week that the spine was torn on my Oxford Dictionary of English Etymology.  It's a case of simple overuse.  Some people will wear out a beloved book from childhood; others will love to death a cherished novel, or memoir, or the Bible.  Me, I wear out the ODEE.  It's kind of pathetic, really.

What led me to this unfortunate discovery was a friend who had asked me why "ruthless" was a word but there was no word for its opposite condition ("ruthful," presumably?).  I didn't know, but it did put me in mind of the following couplet that I learned from my dad when I was a kid:

We rode in my convertible, my girlfriend Ruth and me,
I hit a bump doing 95, and I went on, ruthlessly.

So I went to look it up.  It turns out that the "ruth" in "ruthless" is a cognate of "to rue," meaning "to afflict with contrition or sorrow."  So "ruthless" originally meant "lacking contrition."  "Rue" isn't used much in that sense any more -- besides being the name of a bitter herb, you find it in "rueful," which is sort of the aforementioned opposite of "ruthless" but really has a completely different connotation.  Also, it's in the construct "to rue the day," as in, "you'll rue the day you ever double-crossed me, you dastardly and uncouth villain!"

Which brings us to "uncouth."  There's no such word as "couth," however people joke about it.  The current meaning of "uncouth" as "wild-looking, dirty, scary," is because the last part of the word comes from the Proto-Indo-European root *kynths, meaning "known."  So "uncouth" really means -- and is a cognate to -- "unknown," not "unkempt" (whose meaning it resembles more closely today).  And, by the way, the "kempt" part of "unkempt" comes from Old Norse kembr, meaning "combed."  So it turns out that "unkempt" and "disheveled" were cousins a millennium ago, and still are; the "sheveled" part comes from Old French chevel, meaning "hair."  Both, essentially, meant "having a bad hair day," a narrower meaning than today, when both of them usually simply mean "untidy, rumpled-looking." 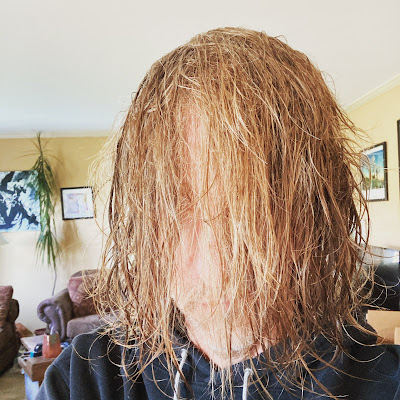 I don't know about you, but sometimes being either kempt or sheveled is simply out of the question.  There are days when even couth is a stretch.
"Disgruntled" is kind of a funny one, because here "dis" is not used in its most common meaning of a negative, but in its far less frequent role of an intensifier -- the only other example I could find was the obscure "disannul" (meaning "to cancel completely").  The "gruntled" part is a cognate of "to grunt" in its old sense of "to complain."  So really, it means "feeling like complaining really loudly."  But it's a pity that it's not one of the opposite-words, like the previous examples.  I think that having "gruntled" mean "cheerful" would be wonderful.

"Nonchalant," and its noun form "nonchalance," are predictably from French, and were only adopted into English in the eighteenth century.  The last part of the words comes from chaloir, meaning "to worry, to be concerned with," so "nonchalant" basically means "Don't Worry, Be Happy."  (Hey, if I have to have that ridiculous song stuck in my head for the rest of the day, so do you.)  Still, you have to wonder why we can't be "chalant."  I certainly am, sometimes.

A lot of "mis" words have no opposites.  You can be a misanthrope, but not an anthrope; a miscreant but not a creant; you can commit a misdemeanor, but not a demeanor.  A mishap occurs when you are unlucky, but only the hapless amongst us would describe winning the lottery as a "hap."

So anyway, you get the picture.  As usual, the answer to my friend's question about why such things happen in languages was "damned if I know."  I doubt much of this was new to you -- probably most of these examples were both toward and heard-of -- but perhaps you had never really stopped to think about the question before, so I hope this post was called-for, and that you were able to make both heads and tails out of it.
*******************************
It's obvious to regular readers of Skeptophilia that I'm fascinated with geology and paleontology.  That's why this week's book-of-the-week is brand new: Thomas Halliday's Otherlands: A Journey Through Extinct Worlds.
Halliday takes us to sixteen different bygone worlds -- each one represented by a fossil site, from our ancestral australopithecenes in what is now Tanzania to the Precambrian Ediacaran seas, filled with animals that are nothing short of bizarre.  (One, in fact, is so weird-looking it was christened Hallucigenia.)  Halliday doesn't just tell us about the fossils, though; he recreates in words what the place would have looked like back when those animals and plants were alive, giving a rich perspective on just how much the Earth has changed over its history -- and how fragile the web of life is.
It's a beautiful and eye-opening book -- if you love thinking about prehistory, you need a copy of Otherlands.
[Note: if you purchase this book using the image/link below, part of the proceeds goes to support Skeptophilia!]