A quick assessment might lead you to think that, at least with stuff down here on Earth, we've discovered about all there is to discover.

We can go pretty much anywhere now, from the tops of the tallest mountains to the bottom of the Marianas Trench.  We've explored all of the continents; even remote places like Antarctica, Siberia, the Yukon, the Amazonian rain forest, and Tibet have been the subject of intensive study.

It's easy for most of us, with our relatively insular lives, to underestimate the size of the planet.  Even those who -- like myself -- have been lucky enough to travel extensively can lose sight of how inaccessible some places are.  Despite technology now allowing us to visit (and live, if we want) pretty much anywhere, there are still huge areas of trackless wilderness out there.

Meaning that huge areas have minimally-studied plants, animals, geological history, paleontology, and -- apposite to today's topic -- archaeology.  So if you're going into science, fret not; it will be a long time before we run out of stuff to explore.

The topic of new discoveries occurred to me when I was reading a couple of articles sent to me by my friend, the outstanding writer Gil Miller, having to do with recent bits of human history that have been uncovered (literally) by researchers.  The first was about the discovery of a previously-unknown two-millennia-old Buddhist temple at a site in Pakistan near the town of Barikot thought to have been completely explored.

The temple, which has been tentatively dated to the second century B.C.E., contains a stupa -- a hemispherical temple, often ornately-carved, used for meditation in the Buddhist tradition -- as well as the bases of several columns, and the foundations of vestibule rooms and a public courtyard.  It's thought to have been constructed during the reign of Menander I, who was Greek by origin, but a Buddhist convert who spent most of his life in what is now India and Pakistan, and who was said to have "conquered more regions than Alexander the Great."  In an all-too-common pattern, the conquests didn't last long after Menander's death; his son, Strato I, and (possible) grandson, Menander II, were plagued by attacks from the Maues, a Scythian tribe that eventually conquered most of what had been Menander I's kingdom.

Unfortunately, archaeological dig sites often get destroyed by plunderers who have figured out that tombs frequently contain valuables, and this site is no exception.  Apparently there are trenches all over the place, dug by robbers, who tore through and destroyed "worthless" artifacts like walls and floors, but -- fortunately -- the area around the temple was relatively unscathed.

The second study is from halfway around the world, in the Yucatán region of Mexico, where a unique bit of research gave us a lens into the peak of Mayan civilization (on the order of eight hundred years ago).  It's been known that cacao was a sacred plant to the Mayans; they're the ones who started humans consuming chocolate, and we pretty much haven't stopped since.  Cacao is a remarkably tricky plant to grow.  It needs a particular combination of soil chemistry, air humidity, calm, and shade in order to flourish.  The Mayans became experts at finding places to grow cacao -- so the researchers reasoned that where you find abundant wild cacao plants, it might be a good indicator that there were Mayan ruins nearby.

However, cacao plants aren't immortal; the plants cultivated by the Mayans eight centuries ago are long gone.  But researchers from Brigham Young University realized that there might be persistent biomarkers -- like the chemicals theobromine and caffeine -- that might indicate where cacao had been grown historically.

So they started sifting through soil samples.

What they found was that the biomarkers were predominantly found near limestone sinkholes -- nine of the eleven sinkholes tested showed measurable theobromine and caffeine in the soil nearby.  They began investigating the sinkholes themselves, rappelling down the walls to the bottom, and found jade and ceramic artifacts, including some tiny ceramics shaped to look like miniature cacao pods.

"We looked for theobromine for several years and found cacao in some places we didn’t expect," said Richard Terry, the senior author of the paper.  "We were also amazed to see the ceremonial artifacts.  My students rappelled into one of these sinkholes and said,  ‘Wow!  There is a structure in here!’  It was a staircase that filled one-third of the sinkhole with stone...  Now we have these links between religious structures and the religious crops grown in these sinkhole.  Knowing that the cacao beans were used as currency, it means the sinkholes were a place where the money could be grown and controlled.  This new understanding creates a rich historical narrative of a highly charged Maya landscape with economic, political and spiritual value."
The third paper was about a dig site in Italy -- surely a thoroughly-studied place if ever there was one -- where researchers uncovered a trove of helmets and other relics from near the Acropolis of Elea-Velia, in the Cilento region.  Elea-Velia was settled by Greeks in the sixth century B.C.E., and became a major trading center between the resident Greeks, the Etruscans to the north, and the rising Roman republic in the south.  The helmets are thought date from the late sixth century, and to have been part of a ritual of thanks for the victory the Greeks and their Etruscan allies had over the Carthaginians in the Battle of Alalia, off the coast of Corsica. 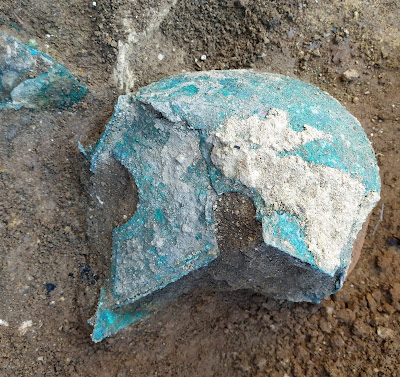 One of the newly-discovered helmets from Elea-Velia
Also uncovered were a tile floor, various pieces of painted ceramics, and the remains of weapons.
Whenever I read about stuff like this, it always makes me wonder what other amazing finds are waiting to be discovered.  If a trove like the one at Elea-Velia, ritual sites such as the one in the Yucatán, and the Buddhist temple in Pakistan can escape notice for the hundreds of years we've been digging up ancient relics, there has got to be a ton more out there to find.
So we need to keep looking.  Every time we find something like this, it enriches our knowledge of our own past.  It reminds me of the wonderful quote by Carl Sagan -- he was referring to astronomy, but it could equally well be applied to any science -- "Somewhere, something incredible is waiting to be known."