Out of sight, out of mind

I suppose that there's at least some benefit to this.  Unpleasant events in our lives would be far, far worse if the distress we experienced over them was as fresh every single day as it was the moment it happened.  That's the horror of PTSD; the trauma gets locked in, triggered by anything that is even remotely similar, and is re-experienced over and over again.

So it's probably better that negative emotions lose their punch over time, that we simply don't remember a lot of what happens to us.  But even so, I kind of wish people would keep important stuff more in mind, so we don't repeat the same idiotic mistakes.  Santayana's quote has almost become a cliché -- "Those who don't remember the past are doomed to repeat it" -- but part of the saying's sticking power is its tragic accuracy.

The reason this comes up is because of some research out of Oxford University that appeared in the journal Trends in Ecology and Evolution this week.  A team led by Ivan Jarić looked at the phenomenon of extinction -- but framed it a bit differently than you may have seen it, and in doing so, turned the spotlight on our own unfortunate capacity for forgetting.

There are various kinds of extinction.  Extirpation is when a species is lost from a region, but still exists elsewhere; mountain lions, for example, used to live here in the northeastern United States, but were eradicated in the late nineteenth and early twentieth century (the last confirmed sighting was in Maine in 1938).  They're still holding their own in western North America, however.  Functional extinction is when the population is reduced so much that it either no longer has much impact on the ecosystem, or else would not survive in the wild without signification conservation measures, or both.  Sadly, the northern white rhinoceros, the northern right whale, and the south China tiger are all considered functionally extinct.

Extinct in the wild is exactly what it sounds like; relict populations may exist in captivity, but it's gone from its original range.  Examples include the beautiful scimitar oryx, the Hawaiian crow, and the franklinia tree (collected in the Altamaha River basin in Georgia in 1803 and never seen in the wild since).  Such species may be reintroduced from captive breeding, but it tends to be difficult, expensive, and is often unsuccessful.

Then there's global extinction.  Gone forever.  There has been some talk about trying to resuscitate species for which we have remains that have intact DNA, Jurassic Park-style, but the hurdles to overcome before that could be a reality are enormous -- and there's an ongoing debate about the ethics of bringing back an extinct species into a changed modern world.

The new research, however, considers yet another form of extinction: societal extinction.  This occurs when a population is reduced to the point that people basically forget it ever existed.  It's amazing both how fast, and how completely, this can happen.  Consider two bird species from North America -- the passenger pigeon (Ectopistes migratorius) and the Carolina parakeet (Conuropsis carolinensis) -- both of which were common in the wild, and both of which went completely extinct, in 1914 and 1918 respectively. 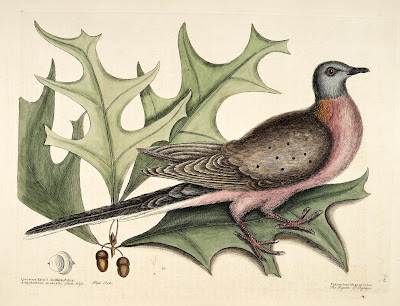 Actually, "common" is a significant understatement.  Up until the mid-nineteenth century, passenger pigeons were the most common bird in North America, with an estimated population of five billion individuals.  Flocks were so huge that a single migratory group could take hours to pass overhead.  Carolina parakeets, though not quite that common, were abundant enough to earn the ire of fruit-growers because of their taste for ripe fruit of various kinds.  Both species were hunted to extinction, something that only fifty years earlier would have been considered inconceivable -- as absurd-sounding as if someone told you that fifty years from now, gray squirrels, robins, house sparrows, and white-tailed deer were going to be gone completely.

What is even more astounding, though, is how quickly those ubiquitous species were almost entirely forgotten.  In my biology classes, a few (very few) students had heard of passenger pigeons; just about no one knew that only 150 years ago, there was a species of parrot that lived from the Gulf of Mexico north to southern New England, and west into the eastern part of Colorado.  As a species, we're amazingly good at living the "out of sight, out of mind" principle.

The scariest part of this collective amnesia is that it makes us unaware of how much things have changed -- and are continuing to change.  Efforts to conserve the biodiversity we still have sometimes don't even get off the ground if when the species is named, the average layperson just shrugs and says, "What's that?"  Consider the snail darter (Percina tanasi), a drab little fish found in freshwater streams in the eastern United States, that became the center of a firestorm of controversy when ecologists found that its survival was jeopardized by the Tellico Dam Hydroelectric Project.  No one but the zoologists seemed to be able to work up much sympathy for it -- the fact that it wasn't wiped out is due only to the fact that a population of the fish was moved to neighboring streams that weren't at risk from the dam, and survived.  (It's currently considered "threatened but stable.")

"It is important to note that the majority of species actually cannot become societally extinct, simply because they never had a societal presence to begin with," said study lead author Ivan Jarić, in an interview with Science Daily.  "This is common in uncharismatic, small, cryptic, or inaccessible species, especially among invertebrates, plants, fungi and microorganisms -- many of which are not yet formally described by scientists or known by humankind.  Their declines and extinctions remain silent and unseen by the people and societies."
Which is honestly kind of terrifying.  It's bad enough to lose species that are, as it were, right in front of our eyes; how many more are we losing that are familiar names only to biologists, or aren't even yet known to science?  And keep in mind that little-known doesn't mean unimportant.  There are plenty of "uncharismatic, small, cryptic, or inaccessible species" that are pretty damn critical.  One that springs to mind immediately are mycorrhizae, a group of underground fungi that form a symbiotic relationship with plant roots.  The relationship is mutually beneficial; the plant has its capacity to absorb minerals and water greatly increased, and the fungus gets a home and a source of food.  By some estimates, 95% of plant species have a mycorrhizal partner, and some -- notably orchids -- are completely dependent on it, and die if they are separated from their fungal symbiont.  Even plants that aren't entirely reliant on them benefit from the relationship; there is increasing evidence that adding mycorrhizal spores to an ordinary vegetable garden can decrease dependence on chemical fertilizers, improve drought resistance, and increase crop yield (some experiments have seen it as much as double).
Incredibly cool.  But not what most of us would consider "charismatic."  I doubt, for example, that micrographs of mycorrhizae will ever usurp the wolves and eagles and elephants on the pages of the calendars we hang on our walls.  I mean, I would buy one, but I suspect I'm in the minority.
What this highlights to me is that we need to fight this tendency to overlook or forget about the organisms in our world that aren't obvious -- the rare, the small, the hidden.  The fact that their plight is not as obvious as the whales and the elephants and the tigers doesn't mean they're unimportant.  We need to become conscious of what's around us, and committed to protecting it.  Another comparison that's become almost a cliché is comparing biodiversity to a tapestry, but the symbolism is apt.
Pull out enough threads, and the entire thing comes to pieces.