The Neanderthals have gotten an undeservedly bad reputation.
"Neanderthal" has become an insult for someone perceived as dumb, crude, vulgar, lacking in any sort of refinement.  This perception wasn't helped any by Jean Auel's Clan of the Cave Bear and its sequels, where the "Clan" (the Neanderthals) are primitive, ugly, brutal people (personified by the violent and cruel Broud), contrasted to the beautiful, heroic, sophisticated Cro Magnons (such as virile, handsome, blue-eyed Jondalar, who is portrayed basically as a prehistoric Liam Hemsworth, only sexier).  The truth is way more complex than that; they certainly weren't unintelligent, and in fact, the most recent Neanderthals had an average brain size larger than a modern human's.  (I'm aware that brain size doesn't necessarily correlate with higher intelligence, but the depiction of them as tiny-brained primitives is almost certainly false.)
They had culture; the Mousterian tool complex, with its beautifully fluted stone arrowhead points, was Neanderthal in origin.  They were builders, weavers, jewelry-makers, and knew the use of medicinal plants.  There's evidence that they made music -- the Divje Babe flute, from 43,000 years ago, was made by Neanderthals from a bear femur, was probably made by Neanderthals.  The structure of the Neanderthal hyoid bone, and the presence of the FoxP2 gene, strongly suggests that they had the capacity for language, although cognitive scientist Philip Lieberman suggests that their mouth morphology would have made it difficult or impossible to articulate nasal sounds and the phonemes /a/, /i/, /u/, /ɔ/, /g/, and /k/, so any language they had probably wasn't as rich phonetically as ours are.  (Although that, too, is an overgeneralization; as I pointed out in a post only a month ago, the phonemic inventory of modern languages varies all over the place, with some only having a dozen or so distinct sounds.)
Another thing that people tend to get wrong is that the Neanderthals were displaced by modern Homo sapiens, and eventually driven to extinction, because we were smarter, faster, and more sophisticated.  Which is not only false, it carries that hint of self-congratulation that should be an immediate tipoff that there's more to it.  It's undeniable that our Neanderthal cousins did diminish and eventually disappear something on the order of forty thousand years ago, but what caused it is uncertain at best.  Other hypotheses regarding why they declined are climatic shifts, disease, and loss of food sources... and, most interestingly, that they interbred with, and were eventually subsumed by, modern humans.  Genetic analysis shows that a great many of us -- including most people of European ancestry -- contain genetic markers indicating Neanderthal ancestry.  Current estimates are that western Europeans have the highest percentage of Neanderthal DNA (at around four percent), while some groups, most notably sub-Saharan Africans, have almost none.
My own DNA apparently has 284 distinct Neanderthal markers, putting me in the sixtieth percentile.  So at least I'm above average in something. 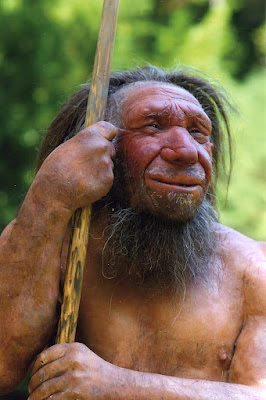 [Image licensed under the Creative Commons Neanderthal-Museum, Mettmann, Homo sapiens neanderthalensis-Mr. N, CC BY-SA 4.0]
What brings this up is some new research indicating that the overlap between Neanderthals and anatomically modern humans may have lasted longer than we thought, and completely upends the picture of hordes of highly-advanced humans (led, of course, by Liam Hemsworth) sweeping over and destroying the primitive knuckle-dragging Neanderthal cave-dwellers.  Archaeologists working in the cave complex Grotte Mandrin, in the Rhône Valley of France, came upon a child's tooth and some stone tools (both of a distinctly modern sort), that date from 54,000 years ago -- a good twelve thousand years earlier than previous estimates.
"It wasn't an overnight takeover by modern humans," said Chris Stringer, of the Natural History Museum of London, who co-authored the paper.  "Sometimes Neanderthals had the advantage, sometimes modern humans had the advantage, so it was more finely balanced...  We have this ebb and flow.  The modern humans appear briefly, then there's a gap where maybe the climate just finished them off and then the Neanderthals come back again..  [W]e don't know the full story yet.  But with more data and with more DNA, more discoveries, we will get closer to the truth about what really happened at the end of the Neanderthal era."
Human history (and prehistory) are a lot more complex than you'd think on first glance, and it bears keeping in mind that usually when we build up a picture of something that happened in the past, we're working on (very) incomplete data filled in with guesses and surmises.  If a time machine is ever invented, and we can go back and look for ourselves, I think we'd be astonished at how much we missed -- or got flat wrong.
It reminds me of the famous quote by H. L. Mencken -- "For every problem, there is an answer that is clear, simple... and wrong."
***************************************
People made fun of Donald Rumsfeld for his statement that there are "known unknowns" -- things we know we don't know -- but a far larger number of "unknown unknowns," which are all the things we aren't even aware that we don't know.
While he certainly could have phrased it a little more clearly, and understand that I'm not in any way defending Donald Rumsfeld's other actions and statements, he certainly was right in this case.  It's profoundly humbling to find out how much we don't know, even about subjects about which we consider ourselves experts.  One of the most important things we need to do is to keep in mind not only that we might have things wrong, and that additional evidence may completely overturn what we thought we knew -- and more, that there are some things so far out of our ken that we may not even know they exist.
These ideas -- the perimeter of human knowledge, and the importance of being able to learn, relearn, change directions, and accept new information -- are the topic of psychologist Adam Grant's book Think Again: The Power of Knowing What You Don't Know.  In it, he explores not only how we are all riding around with blinders on, but how to take steps toward removing them, starting with not surrounding yourself with an echo chamber of like-minded people who might not even recognize that they have things wrong.  We should hold our own beliefs up to the light of scrutiny.  As Grant puts it, we should approach issues like scientists looking for the truth, not like a campaigning politician trying to convince an audience.
It's a book that challenges us to move past our stance of "clearly I'm right about this" to the more reasoned approach of "let me see if the evidence supports this."  In this era of media spin, fake news, and propaganda, it's a critical message -- and Think Again should be on everyone's to-read list.
[Note: if you purchase this book using the image/link below, part of the proceeds goes to support Skeptophilia!]