One of the most misunderstood pieces of the evolutionary model is that natural selection is almost always a compromise.

Very few changes that could occur an organism's genes (and thus in its physical makeup) are unequivocally good.  (Plenty of them are unequivocally bad, of course.)  Take, for example, our upright posture, which is usually explained as having been selected for by (1) allowing us to see farther over tall grass and thus spot predators, (2) leaving our hands free for tool use, (3) making it easier to carry our offspring before they can walk on their own, or (4) all of the above.  At the same time, remodeling our spines to accommodate walking upright -- basically, taking a vertebral column that evolved in an animal that supported itself on all fours, and just kind of bending it upwards -- has given us a proneness to lower back injury unmatched in the natural world.  The weakening of the rotator cuff, due to the upper body no longer having to support part of our weight, has predisposed us to shoulder dislocations.

Then there are the bad changes that have beneficial features.  One common question I was asked when teaching evolutionary biology is if selection favors beneficial traits and weeds out maladaptive ones, why do negative traits hang around in populations?  One answer is that a lot of maladaptive gene changes are recessive -- you can carry them without showing an effect, and if you and your partner are both carriers, your child can inherit both copies (and thus the ill effect).  But it's even more interesting than that.  It was recently discovered that being a carrier for the gene for the devastating disease cystic fibrosis gives you resistance to one of the biggest killers of babies in places without medical care -- cholera.  It's well known that being heterozygous for the gene for sickle-cell anemia makes you resistant to malaria.  Weirdest of all, the (dominant) gene for the horrible neurodegenerative disorder Huntington's disease gives you an eighty percent lower likelihood of developing cancer -- offset, of course, by the fact that all it takes is one copy of the gene to doom you by age 55 or so to progressive debility, coma, and death.

So the idea of "selective advantage" is more complex than it seems at first.  The simplest way to put it is that if an inheritable change on balance gives you a greater chance of survival and reproduction, it will be selected for even if it gives you disadvantages in other respects, even some serious ones.

The reason the topic comes up is because of a cool piece of research out of the University of California - Santa Barbara into a curious genetic change in the charming little Colorado blue columbine (Aquilegia caerulea), familiar to anyone who's spent much time in the Rocky Mountains. 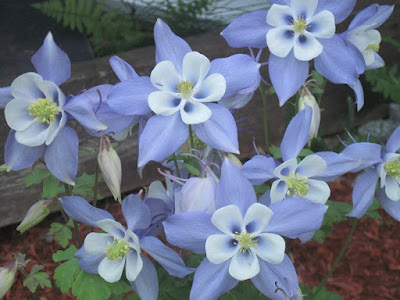 Both the common name and scientific name have to do with birds; columba is Latin for dove, aquila Latin for eagle.  The reason is the graceful, backwards-curved tubular petals, which (viewed from the side) look a little like a bird's foot.  The tubes end in nectar glands, and are there to lure in pollinators -- mostly hummingbirds and butterflies -- whose mouthparts can fit all the way down the long, narrow tubes.

Well, the researchers found that not all of them have these.  In fact, there's a group of them that don't have the central petals and nectar spurs at all.  The loss is due to a single gene, APETALA3-3, which simply halts complete flower development.  So far, nothing too odd; there are a lot of cases where some defective gene or another causes the individual to be missing a structure.  What is more puzzling is that in the study region (an alpine meadow in central Colorado), a quarter of the plants have the defective flowers.

You would think that a plant without its prime method of attracting pollinators would be at a serious disadvantage.  How could this gene be selected strongly enough to result in 25% of the plants having the change?  The answer turned out to be entirely unexpected.  The plants with the defective gene don't get visited by butterflies and hummingbirds as much -- but they are also, for some reason, much less attractive to herbivores, including aphids, caterpillars, rabbits, and deer.  So it may be that the flowers don't get pollinated as readily as those of their petal-ful kin, but they are much less likely to sustain energy-depleting damage to the plant itself (in the case of deer, sometimes chomping the entire plant down to ground level).

If fewer flowers get pollinated, but the ones that do come from plants that are undamaged and vigorous and able to throw all their energy into seed production, on balance the trait is still advantageous.

Even cooler is that the two different morphs rely on different pollinators.  Species of butterfly with a shorter proboscis tend to favor the spurless variant, while the original spurred morph attracts butterflies and hummingbirds with the ability to reach all the way down into the spur.  What the researchers found is that there is much less cross-pollination between the two morphs than there is between plants of the same morph.

For speciation to occur, there needs to be two things at work: (1) a genetic change that acts as a selecting mechanism, and (2) reproductive isolation between the two different morphs.  This trait checks both boxes.

So it looks like the Colorado blue columbine may be on the way to splitting into two species.

Once again, we have an example from the real world demonstrating the power and depth of the evolutionary model -- and one that's kind of hard to explain if you don't buy it.  This time, it's a pretty little flower that has vindicated Darwin, and shown that right in front of our eyes, evolution is still "creating many forms most beautiful and most wonderful."