A sun with no size

When I was in college, the original series Cosmos, hosted by Cornell University astrophysicist Carl Sagan, aired for the first time.

I was absolutely captivated.  I'd been an astronomy buff since middle school.  I was given my own telescope as a birthday present when I was thirteen, and spent many a happy evening in my parents' front yard trying to find the cool-looking astronomical objects I found on the star maps I collected obsessively.  (This is when I first fell in love with the Pleiades -- still my favorite naked-eye star group -- and when I found out that these were recently-created stars, almost fifty times younger than the Sun, I thought that was so cool.  It wasn't until I took an astronomy course in college that I learned how astronomers knew this.)

But when Cosmos came on, it took my interest to a whole new level.  For the time, the special effects and animations were stunning.  The soundtrack was nothing short of brilliant (in fact, it was my first introduction to the music of Dmitri Shostakovich, who has been one of my top three favorite composers ever since).  Sagan's writing and delivery were captivating; like many people who've seen it, if you read quotes from the scripts, you'll hear them in Sagan's unmistakable voice.  I'm not the only one who responded this way; the wildly talented rapper Greydon Square's song "Galaxy Rise" from his album The Mandelbrot Set is a tribute to Sagan and American physicist Michio Kaku.  Square himself majored in physics in college and includes concepts from science in a great many of his songs.

There were a couple of moments, though, that stand out in my memory as being jaw-dropping.  One was the breathtaking animation of colliding galaxies -- all generated from then cutting-edge computer models -- in episode ten, "The Edge of Forever."  But one passage from episode nine, "The Lives of the Stars," impressed me so much that now, forty-two years later, I can very nearly quote it from memory:

There are three ways that stars die.  Their fates are predestined; everything depends on their initial mass.  A typical star with a mass like the Sun will one day continue its collapse until its density becomes very high, and then the contraction is stopped by the mutual repulsion of the overcrowded electrons in its interior.  A collapsing star twice as massive as the Sun isn't stopped by the electron pressure.  It goes on falling in on itself until nuclear forces come into play, and they hold up the weight of the star.  But a collapsing star three times as massive as the sun isn't stopped even by nuclear forces.  There's no force known that can withstand this enormous compression.  And such a star has an astonishing destiny: it continues to collapse until it vanishes utterly.

Each star is described by the force that holds it up against gravity.  A star that's supported by its gas pressure is a normal, run-of-the-mill star like the Sun.  A collapsed star that's held up by electron forces is called a white dwarf.  It's a sun shrunk to the size of the Earth.  A collapsed star supported by nuclear forces is called a neutron star.  It's a sun shrunk to the size of a city. And a star so massive that in its final collapse it disappears altogether is called a black hole.

It's a sun with no size at all.

I can't imagine hearing the last line and not being a little goggle-eyed.

Since Sagan's time, we've learned a great deal more, but by and large, his series still holds up pretty well.  In fact, three years ago astronomers captured the first-ever photograph of a black hole (visible because of the x-ray emission of matter spiraling down toward its event horizon).  And just last week a paper appeared in Physical Review Letters about an event of cataclysmic proportions -- the collision of two black holes.

The collision was detected because of gravitational waves -- ripples in the fabric of spacetime that propagate outward from accelerating masses at the speed of light.  Most gravitational waves are tiny, so it takes huge masses moving really fast to detect them here on Earth; but these were so enormous that they were picked up by two separate detectors (LIGO and Virgo) from 1.2 billion light years away.  Here's artist Aurore Simonnet's conception of what this would have looked like from (much) closer: 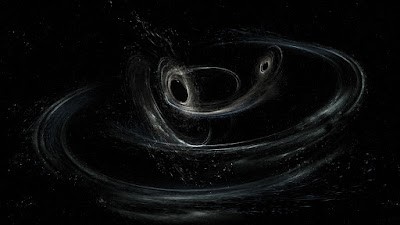 It's hard to describe this event without lapsing into superlatives.  One of the most amazing things about it is that apparently, there was an asymmetry in the production of gravitational waves, and that gave a kick to the (larger) black hole produced once they coalesced, because of Newton's Third Law.
Well, "kick" doesn't begin to describe it.  The recoil from this particular gun left the bullet traveling at 0.5% of the speed of light -- about 1,500 kilometers per second.  Imagine the force it would require to propel a mass that large at that speed.  (Remember that Sagan said black holes only form from stars with a minimum mass of three times that of the Sun.  Minimum.  And this was two of them put together.)

So that's our mind-blowing news from astronomy for today.  Even though I have (on some level) known about this stuff for more than four decades, I still can't help being left in awe by the grandeur and beauty of the universe we live in, and by what we continue to add to our body of knowledge about how it works.

I think Carl Sagan would be delighted.