A paper in Nature last week blew my mind from several different perspectives.

Entitled, "Evidence for Early Life in Earth's Oldest Hydrothermal Vent Precipitates," it sounds at first like something that could only possibly interest paleontology and/or geology geeks.  But as soon as you start looking closely, you find that what this paper describes is groundbreaking.

The group, led by Matthew Dodd of University College London, thin-sliced rock excavated from a piece of the Nuvvuagittuq Supracrustal Belt in Québec, one of the oldest intact rock formations on Earth.  And I do mean thin; the rock slices were, on average, 100 microns thick, or about the thickness of a sheet of printer paper.  And "old" is no exaggeration, either.  The rock is estimated at four billion years old, only three hundred million or so years after the crust solidified from molten magma.

The rock is an iron-rich sedimentary rock that formed at a hydrothermal vent -- a fissure on the deep ocean floor that is spitting out geothermally-heated, mineral-rich water.  We still have these around, mostly in places where the tectonic plates are moving apart, like the Mid-Atlantic Ridge, and even today they host a biome that is unlike any other on Earth.  There are species of shrimp, tube worm, sponges, and bacteria found nowhere else.  Not only that, they are one of only a handful of communities that is disconnected, energetically, from the Sun.  Everything else -- so, almost all life on Earth -- can trace the energy that makes it go back down the food chain and ultimately to a photosynthesizer (usually plants or phytoplankton), which are powered by sunlight.  The hydrothermal vent organisms, on the other hand, are powered by chemical reactions between the seawater and the hot stone of the upper mantle.

And when the scientists looked at the thin slices of the four-billion-year-old rock from Québec, they found... 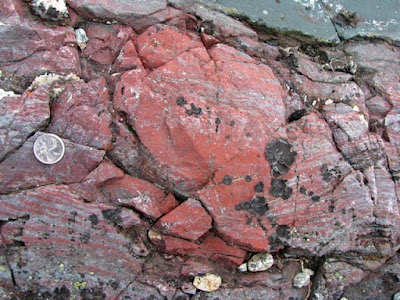 The fossil traces are almost certainly from thermophilic bacteria, but form a colonial structure nearly a centimeter long.  It includes tubes, branching filaments, and spheres that are (the researchers claim) too complex to be explainable by inorganic chemical reactions.  This pushes the earliest life forms back by almost a third of a billion years earlier than the previous estimate, so we're not talking about a small shift, here.

"Using many different lines of evidence, our study strongly suggests a number of different types of bacteria existed on Earth between 3.75 and 4.28 billion years ago," said study co-author Dominic Papineau, in an interview with GeologyIn.  "This means life could have begun as little as 300 million years after Earth formed.  In geological terms, this is quick – about one spin of the Sun around the galaxy."
What this immediately brought to my mind is that it is increasingly looking as if the development of life is much faster and easier than anyone thought, and this bodes well for finding it elsewhere.  Probably lots of elsewheres, considering the billions of extrasolar planets there undoubtedly are in the Milky Way.  Perhaps, too, we might look closer to home; there may even be life in tectonically-active moons in our own Solar System such as Titan and Europa.
I'm not the only one who had this reaction.  "These findings have implications for the possibility of extraterrestrial life," Papineau added.  "If life is relatively quick to emerge, given the right conditions, this increases the chance that life exists on other planets."
Now, bear in mind that still is talking about microscopic life.  Even if the start of life turns out to be common on any sufficiently hospitable planet, that still leaves us with four variables in the Drake equation that are relatively poorly understood -- the fraction of life in the universe that becomes multicellular, the fraction of multicellular life that becomes intelligent/sentient, the fraction of intelligent life that advances in technology enough to send signals into space, and the average length of time such high-tech civilizations last.  So while the current study is encouraging to exobiology aficionados like myself, it may not have a lot of impact on our search for signs of extraterrestrial intelligence.
But no matter how you slice it (*rimshot* again), the Nature paper is amazingly cool.  It's hard to believe that such a short time after the Earth's crust solidified, there were already tiny living things building homes in the oceans.  And it boggles the imagination to think about where else similar life forms might exist -- on some other planet, perhaps, circling one of the stars we see in the night sky.