The cost of helplessness

A serious disruption of the functioning of a community or a society at any scale due to hazardous events interacting with conditions of exposure, vulnerability and capacity, leading to one or more of the following: human, material, economic and environmental losses and impacts...  [Disasters] may test or exceed the capacity of a community or society to cope using its own resources, and therefore may require assistance from external sources, which could include neighbouring jurisdictions, or those at the national or international levels.

This comes up because the UNDRR just released its Global Assessment Report, which was (to put it mildly) not optimistic.  The rate of disasters (as defined) has been rising steadily; over the last two decades the world has averaged between 350 and 500 medium- to large-scale disasters a year, but at the current rate of increase we'll be up to an average of 560 by the year 2030.

The reason seems to be a combination of factors.  One, of course, is anthropogenic climate change, which is destabilizing the climate worldwide (as just one of many examples, the southeastern and midwestern United States is forecast to have record-breaking heat over the next three days, and summer hasn't even officially started yet).  Sea level rise is not only threatening coastlines, if it gets much worse (and there is no reason to think it will not) there are a number of island nations that will simply cease to exist, Tuvalu, Kiribati, Vanuatu, the Marshall Islands, and the Maldives topping the list.  The combined cost of all these disasters, especially in Asia and the Pacific, is predicted to cost affected nations 1.6% of their GDP every year.

You can't incur these kinds of costs and continue to function as a society. 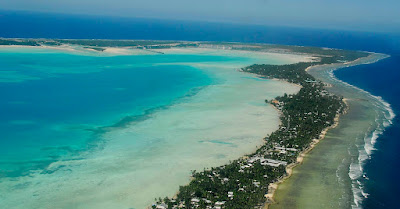 South Tarawa Island, part of the nation of Kiribati [Image licensed under the Creative Commons Photo taken by Government of Kiribati employee in the course of their work, South Tarawa from the air, CC BY 3.0]

The UNDRR's report found that the primary culprits in our vulnerability were:

I think that's spot on, but I'd like to add three of my own:

Despite the odds, this is no time to give up and accept catastrophes as inevitable.  "The world needs to do more to incorporate disaster risk in how we live, build and invest, which is setting humanity on a spiral of self-destruction," said Amina J. Mohammed, Deputy Secretary-General of the United Nations.  "We must turn our collective complacency to action. Together we can slow the rate of preventable disasters as we work to deliver the Sustainable Development Goals for everyone, everywhere."

Which I certainly agree with in principle, but how do you put it into practice?  We've known about humanity's role in climate change, and the potential devastation it will wreak, for more than three decades.  I remember teaching students about it my first year as a public school teacher, which was 1986.  The people who have been the most vocal in advocating a global climate change policy -- my dear friend, the articulate and endlessly courageous Dr. Sandra Steingraber, comes to mind -- have been fighting a Sisyphean battle.

"Disasters can be prevented, but only if countries invest the time and resources to understand and reduce their risks," said Mami Mizutori, who heads the UNDRR.  "By deliberately ignoring risk and failing to integrate it in decision making, the world is effectively bankrolling its own destruction.  Critical sectors, from government to development and financial services, must urgently rethink how they perceive and address disaster risk."
Yes, but how?  Humanity is notorious for valuing short-term expediency and profit over long-term safety -- and even viability.  There are certainly days when I feel like I'm shouting into a vacuum; I've been ranting about environmental issues since I started Skeptophilia in 2011.  But giving up is exactly the wrong response, as tempting as it is some days.  Perhaps we don't know what positive effect we can have if we act, but we do know what positive effect we'll have if we throw our hands up and say, "To hell with it."
Zero.
I'll end with two quotes that I think are particularly apposite.
The first one comes from one of my personal heroes, Wangari Maathai, the amazing Kenyan activist, environmentalist, and women's rights advocate: "In order to accomplish anything, we must keep our feelings of empowerment ahead of our feelings of despair.  We cannot do everything, but still there are many things we can do."
And I'll give the last word to my friend Sandra: "We are all musicians in a great human orchestra, and it is now time to play the Save the World Symphony.  You are not required to play a solo, but you are required to know what instrument you hold and play it as well as you can.  You are required to find your place in the score.  What we love we must protect.  That's what love means.  From the right to know and the duty to inquire flows the obligation to act."