A fish out of water

A lot of us probably have moments in our education where the teacher showed us something that overturned some piece of how we saw the universe.  I can remember several:

Another one came up in my high school biology class, during the unit that was to launch me on a life-long fascination: evolution.  Ms. Miller, our bio teacher, told us that all tetrapods (four-limbed vertebrates) came from a common ancestor, and the way we know this is that regardless of the limb function, they all have the same number and arrangement of bones.  Your arm has one upper arm bone (humerus), two lower arm bones (radius and ulna), seven wrist bones (carpals), five hand bones (metacarpals), and fourteen finger bones (phalanges).  But... so does a whale's flipper, a dog's front leg, a bat's wing, and a lizard's leg.  The sizes differ, but the bones are the same. 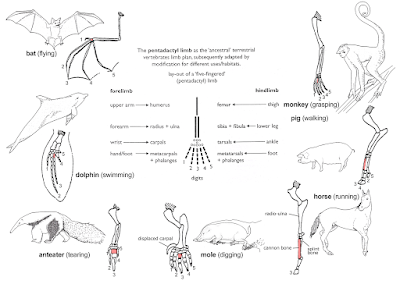 I've never found a single creationist or intelligent design advocate who could give me a cogent explanation of why an omnipotent creator would give a whale articulated finger bones and then encase them in a solid flipper.

In any case, I found the idea boggling; that we have the arm and hand bones we do because we inherited the basic structure from an ancestor hundreds of millions of years ago -- and share that same structure, and that same ancestor, with all other four-limbed vertebrates.  And just a couple of weeks ago, a team led by Shigeru Kuratani of the Evolutionary Morphology Laboratory at the RIKEN Cluster for Pioneering Research in Japan, have found a good candidate for what exactly that common ancestor might be.

Called Palaeospondylus, the great-great (etc.) grandparents of all tetrapods was a fish-like animal, only about five centimeters long.  It swam around in the warm seas of the Devonian Period on the order of four hundred million years ago, so preceded the previous candidate (Tiktaalik) by a good twenty-five million years. 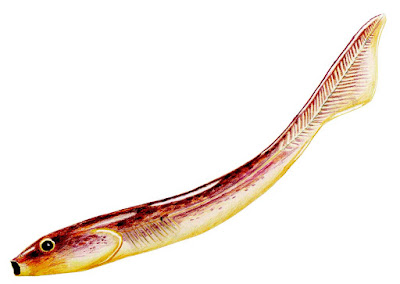 The tipoff that this was the common ancestor of tetrapods had nothing to do with limbs, but with the ear morphology -- they had three semicircular canals, organs critical in balance and equilibrium, just like we do -- and some details of cranial anatomy.  "The strange morphology of Palaeospondylus, which is comparable to that of tetrapod larvae, is very interesting from a developmental genetic point of view," said Tatsuya Hirasawa, who co-authored the study.  "Taking this into consideration, we will continue to study the developmental genetics that brought about this and other morphological changes that occurred at the water-to-land transition in vertebrate history."

I don't know how anyone could think about this -- that a little fish found fossilized in a limestone bed in Scotland might be the last common ancestor between humans, bats, lizards, and salamanders -- and not be at least a little bit amazed.  It brings home what to me is one of the most wonderful things about the evolutionary model; that all life on Earth is connected, not only ecologically, but genetically.  You're a distant cousin to all other terrestrial species, however different they may look from you.

And if learning that doesn't alter your view of the universe, I don't know what would.