Humans have been making and consuming alcoholic drinks for a very long time.

We're hardly the only animal species to experience the psychotropic effects.  You may recall that about ten years ago a story from Sweden (Höme of the Majestic Mööse!  Extra points if you know the reference) in which one of the antlered behemoths got drunk eating fermented fallen apples, tried to climb the apple tree, and got stuck.  Not all species experience the same effects, though.  A 2008 study of pen-tailed tree shrews in Malaysia found that they habitually consume naturally-fermented nectar that raises their blood alcohol levels to well above the legal limit for humans, and show no ill effects whatsoever.  Presumably if they've evolved with that kind of diet, they've developed a mechanism for detoxifying the alcohol, or at least avoiding the psychological effects.  The jungles of Malaysia are thick with predators, and for a small furry mammal to spend all its time stumbling around dead drunk would be a good way to end up actually dead.

The earliest hard evidence of humans making wine or beer comes from near Jiahu, in the Yellow River Valley of China.  Pottery dating from about 6800 B.C.E. was found that had residues of fermented rice, honey, grapes, and hawthorn berries; around the same time, there's evidence of grape wine and barley beer being made in the Middle East.  I've often wondered what that stuff tasted like, as compared to our refined and filtered wines, beers, and spirits a lot of us enjoy today.  Back then, they were relying on wild yeasts and bacteria to do the fermenting, and that undoubtedly led to highly variable results (and a lot of spoilage).

The written records of the Greeks and Romans certainly mention wine and beer, and (especially with the Romans) we know a good bit about their winemaking techniques.  Grape juice, sometimes flavored with spices, honey, or other fruit juices, was boiled, then filtered, poured into clay amphorae, the lids sealed with beeswax, and then buried for a period that could vary from weeks to years.  The resulting liquid was then decanted and bottled.  This was when it was discovered that the soil type, climate, and grape variety had huge effects on the outcome; Roman wines ran the spectrum from surrentine (which the Emperor Tiberius sneeringly called "generous vinegar") to falernian (so expensive it was only available to the very rich but potent -- it was not only delicious, but was aged for up to twenty-five years and had an alcohol content of around fifteen percent). 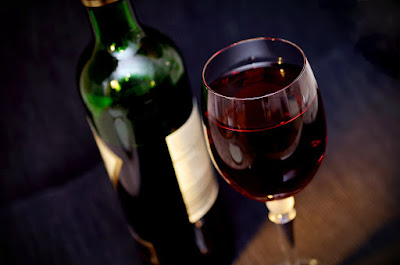 We just learned a little more about the production of vino from an archaeological find from the harbor of San Felice Circeo, ninety kilometers south of Rome.  Wine jars were unearthed in a seabed deposit that still had residues of the wines they contained.  Both red and white wines were found, along with pollen identifiable as coming from several varieties of wild grapes that grow in the area.  (Whether the vines themselves were cultivated is unknown; but those varieties are still found growing wild nearby.)  Interestingly, the amphorae were sealed not with beeswax but with pine tar, and apparently the pine tar was used not only as a sealant but to flavor the wine itself.  Maybe the result was something like Greek retsina, which people seem either to love or hate (I like the flavor, but my wife's opinion is if she wanted to chew on a pine branch, she'd go do it).

It'd be interesting if we went back to Roman times and attended a feast, where it would fall on the spectrum between delectable and revolting.  I wrote last October about a fellow named Andrew Coletti who has tried to recreate bunches of historical recipes as accurately as possible, and found that one of the Roman dishes bore an uncanny resemblance to french fries with ketchup.  But I have no doubt that some of the food and drink would taste pretty strange to us.  I'd still want to try it, though.  I don't hesitate to try local foods when I travel, and have rarely had a bad experience, although I did draw the line at the Icelandic "delicacy" hákarl, which is fermented shark meat.  It apparently has a "strong ammonia smell," and the late Anthony Bourdain said it was "the single worst, most disgusting, and terrible-tasting thing" he'd ever consumed.  Chef Ainsley Harriott was even more descriptive, describing eating it as being like "chewing on a urine-soaked mattress."

I've heard of "acquired tastes," but that's over the line.  In fact, for me, that's so far over the line that from there I wouldn't be able to see the line using a powerful telescope.

But Roman wine?  Sure, I'd give it a go, even the "generous vinegar" one.  Who knows, maybe I'd love it.  Chacun à son goût, and all that sort of thing.  But think about this if you go out for a pint or a glass of wine with friends tonight -- you're partaking in a tradition that goes back in some form or another for thousands of years.  Pretty cool, when you think about it.