The cost of fraud

Her children, especially my cousin Linda, took care of her as she slowly declined during the last fifteen years of her life.  She finally died in 2008 at the age of ninety, and by that time there was little left of her but a physical shell.  She was unresponsive, the higher parts of her brain destroyed by the agonizing progression of this horrible illness.  She went from being a bright, inquisitive, vital woman, an avid reader who did crossword puzzles in ink and could beat the hell out of me in Scrabble, to being... gone. 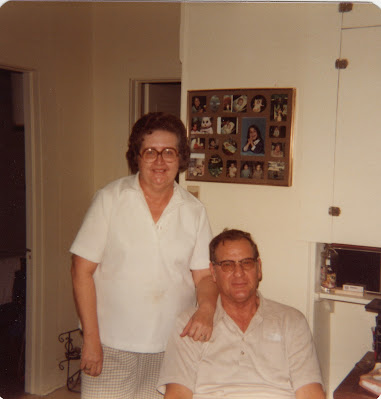 My Aunt and Uncle in better times

During this ordeal I lived fifteen hundred miles away, so I wasn't confronted every day by the terrible reality of what Alzheimer's does, both to the people suffering it and to their families.  Even so, it was my aunt's face I kept picturing while I was reading an article in Neoscope sent to me by a friend -- all the while getting angrier and angrier.

If you've kept up at all with the research on Alzheimer's you probably are familiar with the words beta amyloid.  It's a short-chain protein, whose function is unknown, which allegedly is directly toxic to nerve cells (and can cause other proteins to misfold, suggesting an etiology similar to Creutzfeld-Jakob syndrome, better known as "mad cow disease").  A great deal of money and time has been spent investigating the role of beta amyloid in Alzheimer's, and in developing drugs that interfere with its production -- significantly, not a single one of which has been shown to slow down the progression of the disease, much less reverse it.

It turns out this is no coincidence.  There is good evidence that the often-cited papers on the topic by Sylvain Lesné -- who wrote convincingly that a specific beta amyloid species, Aß*56, was the culprit in the devastating destruction you see in Alzheimer's sufferers -- were based on faked data.

Not even well-faked, either.  The images Lesné included from "Western blot" experiments, a commonly-used separation technique used to detect specific proteins in mixtures, were cut-and-pasted, something that can be seen not only in faint cut lines in the images but in the fact that the bands in the photographs have clearly been duplicated and moved (i.e., if you look at the edges of the bands, several of them have identically-shaped edges -- something that would be next to impossible in an actual Western blot).

It's a devastating finding.  About how the hell fraud like this got past peer review, biochemist Derek Lowe writes in Science:

The Lesné stuff should have been caught at the publication stage, but you can say that about every faked paper and every jiggered Western blot.  When I review a paper, I freely admit that I am generally not thinking “What if all of this is based on lies and fakery?”  It’s not the way that we tend to approach scientific manuscripts.  Rather, you ask whether the hypothesis is a sound one and if it was tested in a useful way: were the procedures used sufficient to trust the results and were these results good enough to draw conclusions that can in turn be built upon by further research?  Are there other experiments that would make things stronger?  Other explanations that the authors didn’t consider and should address?  Are there any parts where the story doesn’t hang together?  If so, how would these best be fixed?

There is a good-faith assumption behind all these questions: you are starting by accepting the results as shown.  But if someone comes in with data that have in fact been outright faked, and what’s more, faked in such a way as to answer or forestall just those sorts of reviewing tasks, there’s a good chance that these things will go through, unfortunately.

Lesné's apparently fraudulent research doesn't invalidate the whole beta amyloid hypothesis; other, independent studies support the toxic effects of beta amyloid on nerve cells, and have shown there's beta amyloid present in damaged cells.  But Lesné's contention that Aß*56 was causative of Alzheimer's was apparently a blind alley -- and the presence of the protein in the neurons of Alzheimer's sufferers could as well be a result of the disease as a cause.
What concerns me about this kind of thing, though, is the damage it does to the scientific enterprise as a whole.  Here in the United States, in the last twenty years, we've been dealing with the effects of a surge of anti-science propaganda on a number of fronts, most notably anthropogenic climate change and the efficacy of vaccines.  When highly cited, widely publicized work like Lesné's is shown to be based on fraudulent data, it gives more ammunition to the crowd who is already shrieking about how the scientists are making it all up to get grant money and are fundamentally untrustworthy.
And as my friend who sent me the link pointed out, there is a profit motive involved in science.  The publish-or-perish model of scientific research means that the competition for grant money is intense and often cutthroat.  Producing publishable results doesn't just get you funded, it is also the key to tenure-track research positions and the stability and prestige that come with them.  Don't get me wrong, I still strongly believe that 99% of scientists are rigorously ethical, and the vast majority of research is reliable; but when you set the system up to punish negative results, it gives the unscrupulous a hell of an incentive to cheat, and the naysayers yet another opportunity to tar all scientists with one brush.
But what haunts me most in this case is the human cost.  This disease destroys lives, and does it in a slow, agonizing, dehumanizing way.  The idea that falsified data may have led researchers down a fruitless rabbit hole, wasting huge amounts of time and money while people suffered and died, is horrifying.  I keep picturing my Aunt Florence's face, as she languished for years, her brain decaying while her body lived on, and wonder how the people who perpetrate such fraud can sleep at night.
****************************************