The eye in the sky

I spend a lot of time railing against the idiotic things humans sometimes do, and heaven knows that's a fertile field to till.  But it's nice sometimes to sit back and realize that for all of our faults, humanity has accomplished some things that are (to put not too fine a point on it) really fucking amazing.

Take, for example, the first released image from the James Webb Space Telescope. 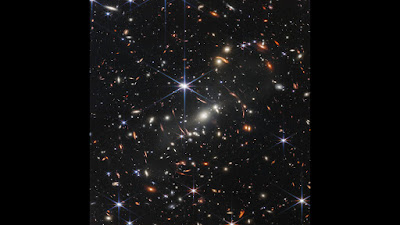 I know that at a quick glance it's easy to say, "Meh, another photo of stars," and move on.  But slow down a second and consider what this actually is.

First of all, each of the bright dots in the photograph isn't a star, it's a galaxy.  Made of billions of stars, which (if current research on exoplanets is even close to accurate) host trillions of planets.  Think about the variety of astronomical objects in this small frame -- not only ordinary stars such as our own, but quasars, gamma-ray bursters, blue-white supergiants, black holes, neutron stars and pulsars, nebulae of various sorts, and hundreds of different kinds of planets, moons, asteroids, and comets.

Second, this is resolution way beyond anything our telescopes have been capable of.  Here's our previous best image of that same region of the sky, taken by the Hubble Space Telescope, with the new JWST image next to it for comparison: 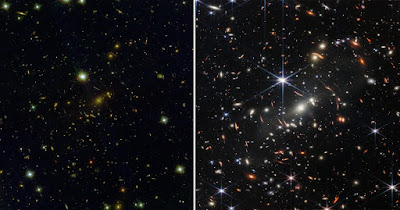 The amount of detail is flat-out astonishing.

It's even more astonishing when you consider the third thing, which is how far away these objects are.  The nearest object in this image is a little under five billion light years away.  The farthest are about thirteen billion light years distant -- so the light the telescope has captured has been traveling toward us for 94% of the age of the universe.  Put a different way, when the light was released from those stars and galaxies, the entire universe was only eight hundred million years old -- it would still be another eight billion years until the Sun itself would form.  We are peering farther out, and further back in time, than we have ever done before.

Last, we've only begun to see what the JWST is going to accomplish.  Yesterday we also got images of:

It's this last one that excites me the most.  Exoplanets are mostly detected indirectly -- usually via their effects on the stars they orbit.  (Two common methods are to look at the Doppler shift in the star's light as it and its planet(s) circle their common center of gravity, and to detect a drop in the star's brightness as the planet passes between us and its star.)  We've only gotten a handful of faint and blurry images of actual exoplanets thus far, because (other than infrared emissions) planets don't produce their own light, so we're only seeing them in the reflected light from their host stars.  Plus, they're really far away.  (It's no coincidence that the smallest exoplanet we've seen directly is around the closest star to the Sun, Proxima Centauri.)

But now?  The JWST is soon going to provide us not only with wow-look-at-this photographs of exoplanets, but spectral data of the light reflected from their atmospheres.  Which tells us the atmosphere's composition.

Which might tell us if there's life out there somewhere.

So this is only a teaser of what's to come.  Whenever life down here on Earth becomes too depressing, just look up.  And consider what we're discovering about the universe we live in, as our eyes in the sky become sharper and sharper.