The house of cards

I was first introduced to the idea that human history has been shaped by climate swings back in 1990, with British science historian James Burke's prescient two-part documentary After the Warming.  In part one, he tracks the (natural) ups and downs that have occurred because of gradual shifts in the Earth's orbit and rotational axis; in part two, he then looks at the effects humans are having because of our out-of-control burning of fossil fuels and use-it-once-then-throw-it-away culture of consumerism.  From my standpoint now, thirty-two years after the documentary was released, his predictions seem nothing short of uncanny, right down to the United States's steadfast determination not to do a damn thing to address anthropogenic climate change.  But he even got a lot of the more specific effects spot-on.  For example, he predicted the crazy spate of Atlantic storms that caused billions of dollars of damage and resulted in the NOAA running out of hurricane names and having to switch over to "Alpha," "Beta," and "Gamma," even getting it right down to the year it occurred (2005).  Watching it now, it's almost like it was made today by someone with a slight penchant for bending the truth, not by someone three decades ago for whom all of these were merely shrewd forecasts.

If I have one criticism of Burke, it's that he gives the impression that everything in history boils down to the climate.  Part one, entertaining and enlightening as it is, is kind of a ninety-minute long exploration of the single-cause fallacy.  That said, it's still a sobering cautionary tale.  We can't discount the effects that shifts in the climate can have on humanity.  Right now in the central and southern United States we're trapped in a heat wave that has already broken records in an area that's accustomed to summer heat; simultaneously the much-more-poorly-prepared people of western Europe are not only facing record high temperatures but droughts and wildfires.

It remains to be seen how long it'll take before the climate naysayers will finally, grudgingly, admit that we've been right all along.

Another of Burke's oversights is an interesting one; although he considers other natural phenomena, he doesn't look at the effects of volcanic eruptions on the climate.  It may be because these are drastic, but usually short-lived; long-time readers of Skeptophilia may recall a piece I wrote a while back on the effects of an eruption in Iceland in the sixth century C. E. that was the principal cause of "the worst decade in history" -- a series of plagues, famines, and catastrophically cold winters that killed an estimated sixty million people.  It took nearly a hundred years for the effects to abate, and when they did, they led into an unusually warm period (probably because of the injection of carbon dioxide into the atmosphere by the eruption).  An even bigger eruption, this one in Indonesia about seventy-four thousand years ago, is thought by some scientists to have nearly caused the human species to go extinct -- the "Toba Bottleneck" may have reduced the entire human population of the Earth to under ten thousand individuals.  (This conclusion, however, is still under serious debate amongst scientists.)

The reason all this comes up is because of an article at the site Yale Climate Connections sent to me by a loyal reader, which describes the historical impact of an eruption I'd never heard about -- the eruption of the Alaskan volcano Mount Okmok in 43 B. C. E. 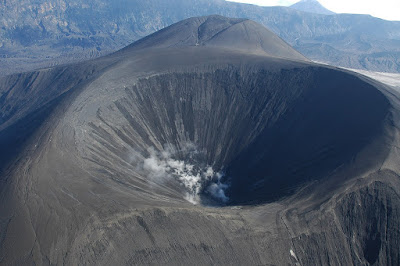 It was another massive one, with global effects.  Tree ring analysis from the White Mountains of California give evidence of the second-coldest winter on record.  Written accounts from Rome describe cold, dry summers that caused agricultural failures several years running; in Egypt, it manifested as the loss of the annual floods of the Nile River three times in a row, resulting in devastating drought and famine.

This, in turn, contributed to the collapse of the Ptolemaic Empire in Egypt, then ruled by the famous and charismatic Queen Cleopatra VII.

It's a little alarming to see how quickly the climate can change, and the havoc such changes can wreak.  It's why people like me have been sounding the alarm for decades, urging caution instead of what we've been doing, which is blundering about as if everything around us is permanent, as if we're guaranteed a clement climate and plenty of food and water.  All you have to do is to look at history to realize how precarious things are.  While I won't go as far as James Burke did in attributing damn near everything to the climate, there's no denying that in many ways the interlocking systems of our planet have the fragility of a house of cards.  Some things -- such as volcanic eruptions and orbital shifts -- we can't do anything about.  But once you see the effects of climate change on the history and habitability of the Earth, I don't see how you wouldn't come away absolutely convinced that we better do everything we can to protect the part of it we can do something about.