One of the biggest mysteries in paleontology is what caused the Cambrian Explosion.
You probably know that the Cambrian Explosion is when, around 538.8 million years ago, all of the basic body plans of modern animals appeared in a relative flash.  Before that, there were various simple and soft-bodied forms; afterward, there were animals that were clearly arthropods, annelids (segmented worms), mollusks, echinoderms, corals, nematodes, and proto-vertebrates.
In addition, there were also a number of groups of uncertain relationship to better-known lineages, and which went extinct by the end of the Cambrian Period.  One of the weirdest is Opabinia: 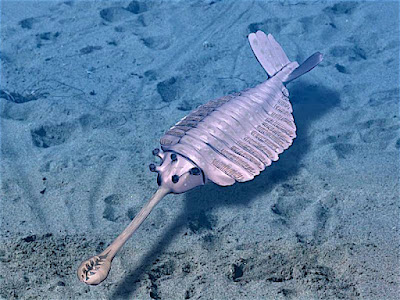 [Image licensed under the Creative Commons Nobu Tamura (http://spinops.blogspot.com), Opabinia BW2, CC BY 3.0]
This kind of rapid diversification is usually an indication that something drastic has changed.  One event that sometimes causes this is a large extinction -- leaving behind open niches that the survivors can adapt to fill.  But there appears to have been no major extinction immediately prior to the Cambrian Explosion.
One of the most plausible explanations has its basis in the observation that a lot of the new forms had fossilizable parts -- shells, exoskeletons, teeth, stiff fins and tails adapted for rapid swimming, and so on.  These more durable body parts mostly are either of a defensive or offensive nature.  So perhaps the Cambrian Explosion was triggered when formerly scavenging species realized they didn't have to wait for their friends and neighbors to die to have dinner, and predation was invented.  At that point, there's a hell of a selective pressure for said friends and neighbors to develop structures that protect them from being on the day's menu -- or turn them into predators themselves.
That theory about the origins of the Cambrian Explosion got a significant boost with the recent discovery of a fossil in Charnwood Forest, near Leicester, England, which is the oldest clearly predatory animal known -- and dates to 560 million years ago, so about twenty million years prior to the spike in biodiversity.
It's a relative of modern sea anemones, and was christened Auroralumina attenboroughii, "Attenborough's dawn lantern," after naturalist David Attenborough, who said he was "truly delighted" by the honor. 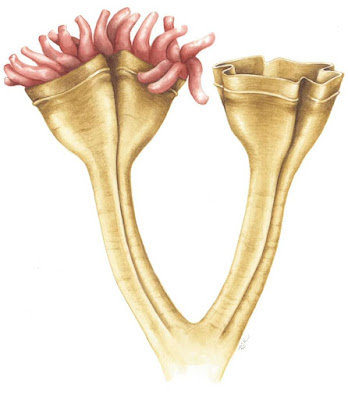 [Image licensed under the Creative Commons F. S. Dunn, C. G. Kenchington, L. A. Parry, J. W. Clark, R. S. Kendall & P. R. Wilby, Auroralumina attenboroughii reconstruction, CC BY-SA 4.0]
It's wildly inaccurate to say that "this is the species that caused the Cambrian Explosion," but it certainly is suggestive that predators evolved not that long before the burst in biodiversity began.  "It’s generally held that modern animal groups like jellyfish appeared 540 million years ago, in the Cambrian Explosion, but this predator predates that by twenty million years," said Phil Wilby of the British Geological Survey, who co-authored the study.  "It’s the earliest creature we know of to have a skeleton.  So far we’ve only found one, but it’s massively exciting to know there must be others out there, holding the key to when complex life began on Earth."
It's amazing to think of what the Earth was like back then.  The only life was in the sea, and the vast continents were nothing but bare rock and sand without a single living thing anywhere.  Into that world was born an animal that was one of the first of its kind, a predatory beast with a protective skeleton to make sure that it wouldn't get turned into lunch itself -- launching the evolution of a dizzying array of structures that allowed for fleeing, attacking, and self-protecting, including all of the big, nasty, pointy teeth we see in predatory animals today.
****************************************