Over the last ten days I took a hiking and camping trip in Iceland.  It's a fascinating country, and earns well its nickname of "The Land of Fire and Ice."

It's my second visit; the first time I went there was in 2000, when I had only dated my (then) girlfriend, (now) wife, for a few months.  I'd signed up to go that August with a group of friends for a trip mostly focused on birdwatching, and one day over dinner a few months prior I said to Carol, half jokingly, "Hey, I'm taking a trip to Iceland, you wanna come?"  My expectation was that her response to being asked to go on a trip to a remote island in the North Atlantic by a guy she hadn't known long was going to be, "Um, no thanks... you have fun.  Why the hell do you want to go to Iceland, of all places?"

What she said was, "When do we leave?"

That was one of many moments that convinced me this was a match made in heaven.

The trip took us along the Ring Road around the entire perimeter of the island, and we saw some great birds and generally had a wonderful time.  This time, I went with a group of men associated with Mannsvolk, a German-based men's mentorship and workshop group that I first became associated with through a weekend retreat I attended in 2019.  So two weeks ago I packed everything into a new trekking backpack (my old one having seen its best days about thirty years ago), and off I went to Reykjavik.

I had been lulled into a false sense of security by my first trip, during which the weather was amazingly sunny and warm.  The locals we spoke to said that such a stretch of beautiful weather was pretty well unheard-of, even in midsummer, but of course it was the weather itself and not their warnings about how bad it could be that stuck in my memory.  This time, though, was more typical, and we only had a couple of days of sunshine and anything like real warmth. 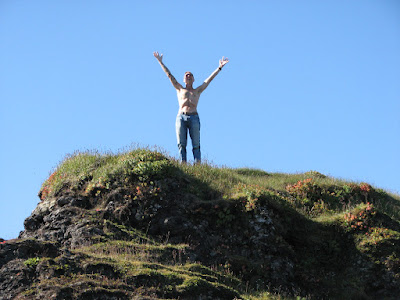 Me at Landmannalaugar, on the nicest day we had.  Of course I took the opportunity to run around shirtless, because that's kind of what I do.

Most of the weather was cloudy, cold, and intermittently spitting rain.  The wind varied from "breezy" to "stiff gale" to "holy fuck grab on to something heavy or you'll blow away."  But there's no doubt the scenery was well worth the discomfort.  You may have heard about the recent volcanic eruption of Fagradalsfjall, one of the dozens of active volcanoes in Iceland -- specifically the cinder cone eruption at Meradalir.  Well, we hiked in and saw it.  It's one of the most grueling hikes I've ever done, over loose, basketball-sized chunks of lava rock, but when we got there... wow.

You hear it before you see it; a low, powerful thrumming noise, like a giant heartbeat.  It makes your innards vibrate.  Then you can see the steam plumes over a low rise, and smell the sulfur.  Then you get to the top of a the hill, and... 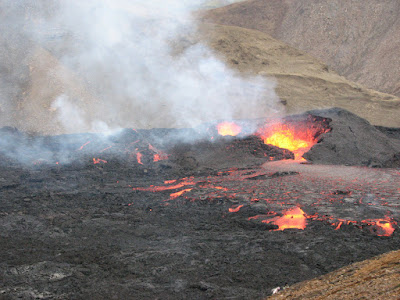 It was jetting fountains of lava into the air, and the whole surface was undulating like a pot of oatmeal bubbling on the stove.  It's almost a cliché to say that sights like this make you realize the power of nature, but man, after being here, I felt very puny.
We also went near Hekla, one of the most active volcanoes in the world (although not erupting at the moment).  During various enormous outbursts over the last three thousand years, Hekla spewed out so much tephra (fragmented chunks of lava that look like coarse black sand) that it created a terrain that looks like a moonscape, where almost nothing grows but tufts of desiccated grass. 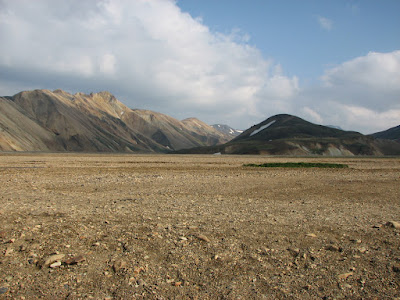 The Ash Desert of Hekla
Still, as Ian Malcolm famously put it, "Life... uh... finds a way."  Even in areas that had been hit hard by volcanism, we saw signs of the tenacity of living things. 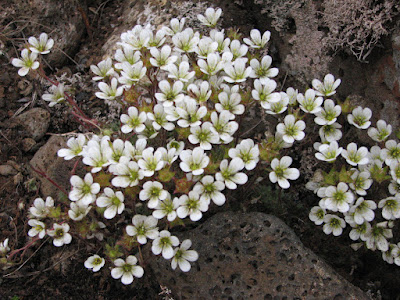 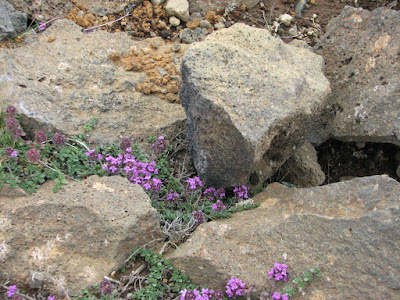 Iceland owes its violent geology to the fact that it sits at the boundary of the North American and Eurasian Tectonic Plates, which are moving apart at a rate of about 9.7 centimeters a year.  This fairly extraordinary rate of stretch means that Iceland is getting larger, and as the island splits in two, subterranean magma comes to the surface to fill in the gap. 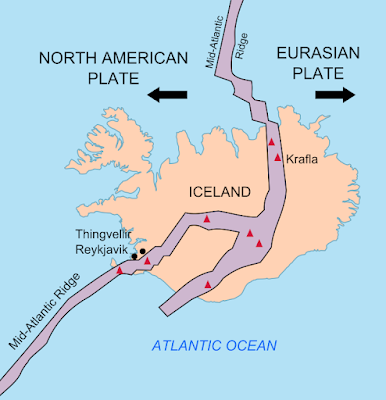 [Image is in the Public Domain courtesy of the USGS]
Interestingly, our path took us pretty much right along the plate margin (the purple line in the above map) the whole way, starting in Reykjavik in the southwest (Fagradalsfjall Volcano is the red triangle at the lower left), going up the left-hand branch of the forking split almost all the way to Krafla in the northeast.  One nice thing is that we didn't go to many of the same places I'd already seen on my first trip, but one unfortunate exception was Mývatn.
Mývatn is one of those places that fall into the "it makes a good story afterward" category.  We'd selected it as a destination on our first trip because it has a well-deserved reputation for being an outstanding site for birdwatching.  We only found out after we got there, though, that there's a reason for its popularity with birds.  It's also wildly popular with flying insects, particularly a species of midge which enjoys nothing more than flying into noses, ears, and mouths.  "Mývatn," in fact, is Icelandic for "lake of the flies," something we didn't find out until after we'd gotten there.  People in the nearby village of Reykjahlíð, in fact, wear head nets when they walk to the grocery store.  I distinctly recall talking to a local when I was there the first time, and he found out we'd come for birdwatching.  "It's the only reason you'd be here," he said, glumly.  "This is the worst place in Iceland."
Be that as it may, we stayed there a couple of days this time.  I'm happy to say that there was only one evening when the insects were truly gawdawful, but given that the reason for that was at other times the wind was howling so hard the flies couldn't find us, I'm not sure that's much of a consolation.
The various difficulties we experienced on this trip were worth it, though, to see places like Aldeyjarfoss Waterfall, with its bizarre columnar basalt formations: 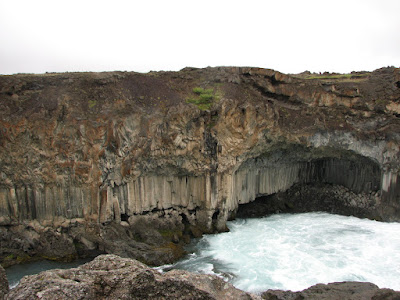 And the harbor of the beautiful little village of Akureyri: 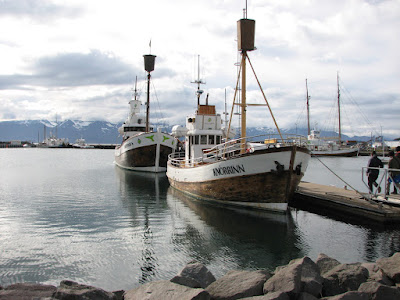 And I even got to see some birds, albeit familiar ones: 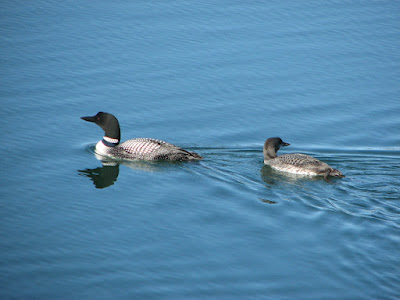