Written in the genes

Two years ago, I wrote about a mysterious plunge in global average temperature that occurred 12,800 years ago.  It's nicknamed the "Younger Dryas event," after the tundra wildflower Dryas octopetala, which showed a population explosion over the following millennium (as judged by pollen in ice core samples).  This plant only flourishes when the winters are extremely cold, and the pollen spike, along with various other lines of evidence, supports a rapid drop in temperature averaging around six degrees Celsius worldwide. 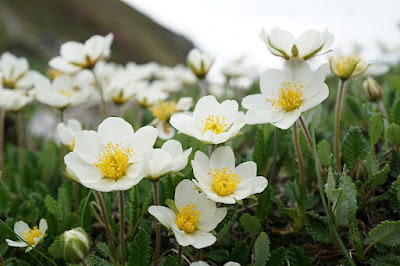 The obvious question, of course, is what could cause such a rapid and catastrophic drop in temperature.  There are three reasonably plausible answers that have been suggested:

The discussion amongst the scientists is ongoing, but the weight of evidence seems to favor the impact hypothesis.  (The link I posted above has more details, if you're curious.)

What's more certain is that the Younger Dryas event had a massive effect.  A number of large mammal groups -- including mastodons, North American camels, dire wolves, and gomphotheres (a bizarre-looking elephant relative) -- all went extinct shortly after the event itself, whatever it was, occurred.  Humans very nearly bit the dust, too; two of the dominant cultures of the time, the Natufian culture of the Middle East and the Clovis culture of North America, both collapsed right around the same time.

It's the latter that brings the topic up, because of some fascinating new research that came out last week, led by Paula Paz Sepúlveda of the Universidad Nacional de La Plata (Argentina), which looks at the effects this wild climate reversal had on the human genome.

What the researchers did was look at the makeup of the Q Y-DNA haplogroup.  You probably already know that two bits of our genome, the Y chromosome and the mitochondrial DNA, are frequently used for analyzing ethnic group affiliations because they don't recombine each generation -- they're passed down intact through (respectively) the paternal and maternal line.  So your mtDNA is the same as your mother's mother's mother's (etc.), and if you're male, your Y DNA is the same as your father's father's father's (etc.).  This means that the only differences in either one are due to mutations, making them invaluable as a measure of the degree of relatedness of different ethnic groups, not to mention providing a way to track patterns of human migration.

The Q haplogroup is ubiquitous in indigenous people of North and South America, so it was a good place to start looking for clues that the climate shift might have written into the human genome.  And they found them; coincident with the Younger Dryas event there was a marked drop in genetic diversity in the Q haplogroup.  It looks like the climate calamity caused a bottleneck -- a severe reduction in population, resulting in a loss of entire genetic lineages:

The YD impact hypothesis states that fragments of a large disintegrating asteroid/comet hit North America, South America, Europe, and Western Asia at 12,800 cal BP.  Multiple airbursts/impacts produced the YD boundary layer (YDB, Younger Dryas boundary), depositing peak concentrations of a wide variety of impact markers.  The proposed impact event caused major changes in continental drainage patterns, ocean circulation, in temperature and precipitation, large-scale biomass burning, abrupt climate change, abrupt anomalous distribution of plants and animals, extinction of megafauna, as well as, cultural changes and human population decline.  The diversity of the set of markers related to the cosmic impact is found mainly in the Northern hemisphere, including Venezuela, but they have also been recorded in the Southern hemisphere, in Chilean Patagonia, and Antarctica.

It's fascinating to think of our own genomes, and (of course) the genomes of other species, as being a kind of proxy record for climate; that not only gradual fluctuations, but sudden and unexpected events like impacts and volcanic eruptions, can leave their marks on our DNA.  It brings home once again how interlocked everything is.  Our old perception of humans as being some kind of independent entity, separate from everything else on Earth, is profoundly wrong.  We were molded into what we are today by the same forces that created the entire biosphere, and we can't separate ourselves from those forces any more than we could disconnect from our own heartbeats.  As Chief Seattle famously put it, "Man did not weave the web of life, he is merely a strand in it.  Whatever he does to the web, he does to himself."