If last week's post about the Demon Ducks of Australia wasn't sufficient to scare you into stopping your project to build a working time machine so you can study prehistoric life first-hand, take a look at a different recent fossil discovery -- this one of a bird with a six-meter wingspan...

Well, pseudoteeth, says the Wikipedia article on pelagornithids, because they don't have the same structure as true teeth and are actually outgrowths of the premaxillary and mandibular bones.  But that would have been little consolation to their prey: 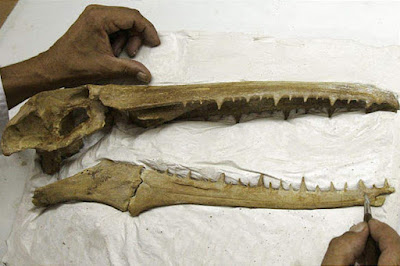 This rather horrifying discovery, which I found out about thanks to a loyal reader of Skeptophilia, lived in Antarctica on the order of fifty million years ago.  The entire order was around for a very long time -- they first evolved shortly after the Cretaceous Extinction 66 million years ago, and only went extinct at the end of the Pliocene Epoch, three million years ago.  So these enormous toothed birds (pardon me, pseudotoothed birds) were swooping around scaring the absolute shit out of everyone for about sixty times longer than humans have even existed.
"In a lifestyle likely similar to living albatrosses, the giant extinct pelagornithids, with their very long-pointed wings, would have flown widely over the ancient open seas, which had yet to be dominated by whales and seals, in search of squid, fish and other seafood to catch with their beaks lined with sharp pseudoteeth," said Thomas Stidham of the Chinese Academy of Sciences, who co-authored the study.  "The big ones are nearly twice the size of albatrosses, and these bony-toothed birds would have been formidable predators that evolved to be at the top of their ecosystem."

It's easy to look around at today's chickadees and warblers and think of birds as being small, feathery, fluttering creatures who are more often prey than predator.  But even today we have, as a reminder that birds are dinosaurs, species like cassowaries: 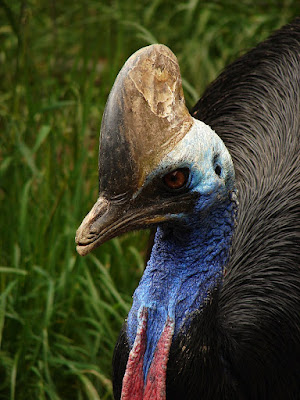 [Image licensed under the Creative Commons Nevit Dilmen, Darica Cassowary 00974, CC BY-SA 3.0]
Which are as foul-tempered as their expression suggests, and have been known to attack people by kicking them with their heavy, razor-taloned feet.  So it's not just the prehistoric birds that have as their motto, "Do not fuck with me."
Anyhow, that's today's installment from the "Be Glad You Live When And Where You Do" department.  As fascinating as I find prehistoric life and birds in particular, I'd prefer not to meet in person a bird that could carry me away and eat me for breakfast.
****************************************