People who know me are well aware that I consider our two dogs, Guinness and Cleo, to be family members, not just pets.

They're kind of an odd couple.  Guinness ("Dorkus Maximus") is a big, lumbering pit bull mix, whose thick coat and curly tail comes from some husky and chow ancestry turned up by DNA analysis; Cleo ("Dorkus Minimus") is a tiny, one-eyed pure-bred Shiba Inu rescue, whose personality supports the contention that Shibas are dogs for people who really wanted a cat instead.  Despite the fact that they seem to have nothing in common, they are best friends.  When they play tug-of-war, even though Guinness outweighs Cleo by a factor of four, he lets her win sometimes, as a good big brother should. 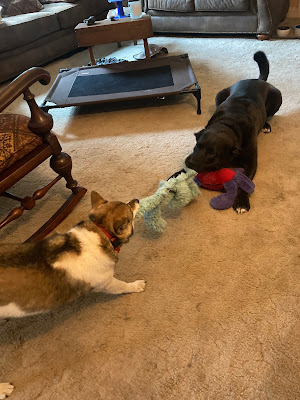 I've dealt here before with the fascinating questions surrounding how dogs were domesticated, and how since then they've coevolved to live with (i.e. manipulate) their owners.  So it was no surprise that a recent piece of research in the journal Anthropozoologica caught my eye.  The author, Julian d'Huy of the Collège de France, has been studying the mythology that has grown up around dogs in cultures across the world, and found some fascinating commonalities -- suggesting that our mythologizing dogs has as long a history as our domesticating them.
d'Huy found that there were three themes that seemed to be universal: (1) dogs as faithful companions to heros/heroines; (2) dogs as protector spirits and guides to the afterlife; and (3) an association between dogs and the star Sirius (the "Dog Star," the brightest star in the night sky, in the constellation Canis Major -- the "Big Dog").
The first one is hardly surprising, given the fact that humans have had dogs as companion animals for thousands of years.  The second I find a little more puzzling.  Neither of our dogs is what you might call an effective guard dog, unless you count their mortal hatred of the Evil UPS Guy.  When the Evil UPS Guy shows up, both Guinness and Cleo go berserk, running around and barking, Guinness's booming "WOOF" punctuated by Cleo's comical and high-pitched "Ruff!", until finally the Guy gets scared and intimidated and leaves.  At least that's how they interpret it.  What seems to go through their heads is "we barked and he ran away, go us!"  Then they high-five and go back to sleep, so worn out that they wouldn't even twitch if an actual burglar were to show up.  In fact, if the burglar had some chunks of cheese in his pocket, Cleo would probably show him where the valuables are hidden.
I do think it's kind of fascinating, though, despite my own dogs' failings in the Guardian of House and Hearth department, that so many cultures associate dogs with being protector spirits, many of them shapeshifters who were thought to continue their loyal defense even in the afterlife.  Part of the elaborate tattoo on my back, shoulder, chest, and arm contains a design of two Celtic-style dogs, a tribute not only to my personal furry friends but to their role as spiritual guides and protectors.
But the oddest of all is the third of d'Huy's observations -- that apparently, Sirius was associated with dogs by more cultures than just the ancient Greeks.  Given the dubious resemblance of the constellations to the things they're supposed to represent, I always figured that most of them were completely arbitrary, and our current designations were probably the result of some ancient Greek guy looking up into the night sky at a random cluster of stars, probably after drinking way too much ouzo, and saying, "Hey, y'ever notice that bunch o' stars over there?  Looks just like a dude pouring water out of a pitcher."  And that's how "Aquarius" was born.
d'Huy's contention is that the association of Sirius with dogs isn't because there's anything especially doggy about it, but that the connection goes way back -- so much so that it's been passed down in many different cultures, and maintained even as populations traveled all over the world.  I don't know how you'd prove such an assertion, but in any case, it's kind of a strange coincidence otherwise.

So dogs have worked their way not only into our hearts and homes, but into our stories, lore, and mythology.  I guess it only makes sense that these creatures who have become so close to us would show up in the tales we tell.  Dogs have made appearances in my own books, most notably the characters of Ahab (in Signal to Noise) and Baxter (in Kill Switch), the latter of which was the cause of one of the funniest interactions I've ever had with a reader.  I was walking down the street in my home village, and a guy I barely know came up to me and said he was reading Kill Switch, and so far, enjoying it.

"I just wanted to let you know one thing, though," he said.  "I know it's a thriller.  I know people are gonna die.  But..." -- and here, he grabbed me by the arm and looked me straight in the eye with a grim expression -- "... if you kill Baxter, I will never speak to you again."

We care deeply about our pets, even fictional ones, I guess.

But now I need to wind this up, and go see why Guinness and Cleo are barking.  My guess is it's the Evil UPS Guy again.  He just never gives up, that Guy.