Peculiarities of the past

When most of us think of prehistoric animals, the first thing that comes to mind are dinosaurs.  Second, perhaps, are the Ice-Age megafauna like mammoths and giant ground sloths.  I've always found the odd, obscure ones more compelling somehow, and when I go to the Museum of Natural History in New York City, and the Smithsonian in Washington D.C., I always spend way more time with strange and less-familiar curiosities like the bizarre creatures of the Ediacaran Assemblage (sometimes known as the "Cambrian explosion fauna") and the scurrying little multituberculates, superficially rodent-like mammals that once were the most diverse and common mammalian group, went completely extinct for unknown reasons about thirty million years ago, and which aren't closely related to any living species.

The reason this comes up is three separate scientific papers that came out last week, each about a different paleontological discovery that shows us just how different life was back in the distant past.  The first, and oldest, was made on the Isle of Skye, and dates to the middle Jurassic Period, about 166 million years ago.  The fossil is of an animal called Marmorerpeton, and it represents the earliest salamander species ever discovered in Europe.

Marmorerpeton was a heavy-bodied animal was a wide, flat, frog-like head, and according to the research team that studied it, has salamander-like features but isn't closely related to extant groups of salamanders. 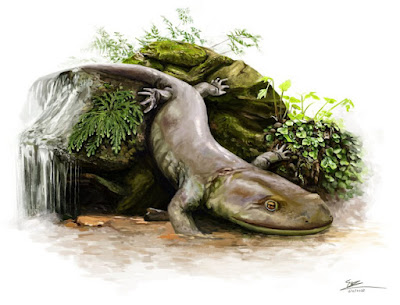 The second study looks at a mammal called Pantolambda bathmodon, a sheep-sized, stocky species nicknamed ManBearPig (a nod to the South Park episode of that name) that lived 62 million years ago -- making it one of the first relatively large species to evolve after the catastrophic Cretaceous Extinction took out nearly every animal species on Earth larger than a cat.  Pantolambda belonged to a mysterious order named Cimolesta, which is still being argued about not only for how it fits in with other mammals, but whether it gave rise to any living descendants -- some have suggested they were the ancestors of pangolins, others that they gave rise to early carnivores, but many paleontologists believe that Cimolesta went completely extinct. 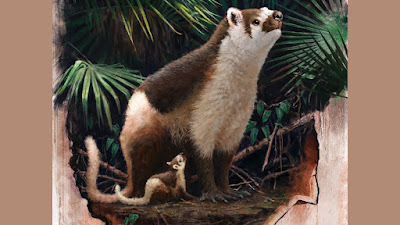 The current study looks at an analysis of the annual growth lines the Pantolamba teeth, and found that they grew fast -- one possible reason why they rose to dominance so quickly, only four million years after the devastation of the asteroid strike.  Interestingly, the fossils studied were found in the San Juan Basin in New Mexico, an area that would have been flash-fried minutes after the impact -- so it's doubly amazing that a large species would have shown up so quickly.

The last, and most recent, discovery comes from the Lower Omo Valley in Ethiopia, and shows that between two and six million years ago, there were prehistoric otters living there -- otters the size of lions.

Enhydriodon omoensis looked very otter-like, but grew to be two meters from tip to tail, and topped the scales at two hundred kilograms.  Isotopic analysis of the teeth indicates that it wasn't an aquatic species, but was largely a terrestrial carnivore.

And it lived at the same place and time as our ancestors the australopithecenes.  How scary is that?  I think otters are adorable, but a lion-sized otter that can eat you is not exactly what you might call cute. 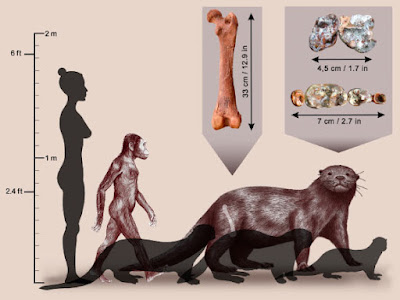 Size comparison (left to right) -- modern human, australopithecene, South American giant otter, sea otter, African otter.  Enhydriodon is in the background.  Looking at you hungrily.  [Image courtesy of Sabine Riffaut / Camille Grohé / Palevoprim / CNRS – Université de Poitiers]
So that's our look at prehistoric life for today -- ancient salamanders, ManBearPigs, and enormous, people-eating otters.  As much as I'd love to see some of these weird creatures first-hand, it does make me kind of glad to live when and where I do.  I'm just as happy not taking my life into my own hands every time I step outside my front door, when the salamanders are (mostly) small enough to pick up, there's no sheep-sized ManBearPig, and the otters are little and cute.  We students of the past might sometimes wish for a time machine, but it's an open question of how long we'd last if we actually got to use one.
****************************************