Seeing in a different light

I still recall one time she completely boggled my mind.  It was when we were studying the anatomy and physiology of the eye, and she told us that the human eye could only perceive a tiny little slice of the electromagnetic spectrum.  The rest -- radio waves, microwaves, infrared, ultraviolet, x-rays, and gamma rays -- are all light, just like visible light, differing only in frequency and wavelength.  It's just that our eyes aren't built to be sensitive to these other parts of the spectrum.

Further, because of the way light refraction works, the structure of our eyes would have to be different if they could detect different frequencies.  To see in the radio region of the spectrum, for example, we would need to have eyes larger than wagon wheels.  Which would be a little cumbersome.

Nevertheless, there are animals that can see at least some parts of the spectrum we can't.  Mosquitoes can see in the infrared region -- one of several ways the little buggers find you in the dark.  Bees can see into the ultraviolet, and in fact some bee-pollinated flowers have coevolved to reflect in the ultraviolet region.  These flowers might look white or solid-colored to our eyes, but to a bee, they're spangled with spots and stripes -- advertisements that there's nectar inside.

"But... does that mean there are other colors, ones we can't see?" I asked Ms. Miller.  "What color would ultraviolet light be?"

While we still don't know what these other regions of the spectrum would look like to animals that can perceive them naturally, we now have devices that can take photographs sensitive to different frequencies -- effectively converting this invisible (to us) light into visible light so we can see the patterns made by light sources emitting in other parts of the electromagnetic spectrum.  This, in fact, is why this subject comes up; just last week, the James Webb Space Telescope returned stunning photographs of the Phantom Galaxy (M74), not only in the visible light region of the spectrum, but in the infrared.  Here's what it looks like to our eyes: 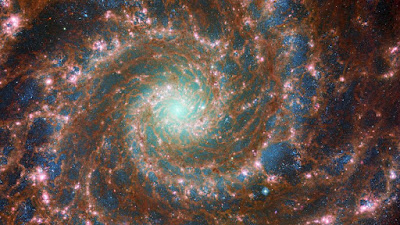 And here's what the same galaxy would look like if our eyes could see in the infrared: 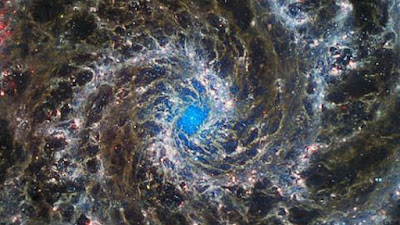 We really are only sensing a vanishingly small part of what's out there -- and we are fortunate to live in a time when our devices are allowing us to get a glimpse of what the world would look like to eyes different from our own.

I don't know how anyone wouldn't be awestruck by the photos being taken by the JWST.  We need to be reminded of the grandeur and majesty of the universe, not only for our aesthetic appreciation, but to force us to realize the pettiness of our own small concerns against the backdrop of the galaxies.  A little humility goes a long, long way.

So check out the ongoing updates from NASA/JPL.  I bet you'll have your mind blown over and over again -- just like mine was back in tenth grade biology when I first realized that everyone doesn't see the world the same way.  Because that's a great thing to be reminded of, too -- that our narrow little viewpoint isn't universal.  It's what I tried to capture in the final conversation between the character of Duncan Kyle and the enigmatic Sphinx, in my novel Sephirot -- when Duncan is trying to argue that of course what he's seeing is real:

"It's a matter of practicality," Duncan said, an edge of anger in his voice.

"No," the Sphinx replied.  "It is a matter of Duncan Kyle deciding that he knows what is possible and what is impossible.  Who appointed you the Arbiter of Truth?"

"Isn't that what all humans do?"

"It's what they stop doing," the Sphinx said, "if they want to know what the Truth actually is.  You really think your puny, nearsighted eyes, your weak ears, your dull and calloused skin, can sense everything there is to sense?  That your feeble brain can know everything there is to know?  How arrogant of you."

"I never thought of it that way."
"So a man who cannot prove that he isn't a reflection of a reflection, who doesn't know whether he is flesh and blood or a character in someone else's tale, sets himself up to determine what is possible."  She chuckled.  "That's rich."