Whenever the topic here at Skeptophilia takes a paleontological turn, I always seem to focus on bizarre creatures very far removed from the iconic T. rexes and stegosauruses that typically grace the covers of children's books on prehistoric life.
I'm not sure why the charismatic dinosaurs hold less of a fascination for me than weird critters like spiky Hallucigenia (which means "causes hallucinations" in Greek, and is such an anomaly that the earliest fossil reconstructions were upside down), Opabinia (with its five eyes and vacuum-hose mouth), and Anomalocaris (Greek for "abnormal shrimp" -- abnormal indeed, with mouthparts like a pair of serrated scissors).
So given my penchant for appreciating the odd, I suppose it's no shock that my attention was immediately grabbed by a new piece of research about a creature nicknamed "the Alien Goldfish."  More surprising, though, is that I'd never even heard of this thing.
Named Typhloesus ("blind eater"), this peculiar animal was discovered in Carboniferous-age rocks in Bear Gulch, Montana, in 1973.  Early studies were confounded by the discovery within one of the fossils of hard, toothlike structures that turned out not to be from the animal itself but from its last meal, a conodont fish.  Once that was cleared up, it rapidly became obvious that Typhloesus was an "orphan" -- a species which, like its weird contemporary Tullimonstrum, wasn't closely related to anything we know of. 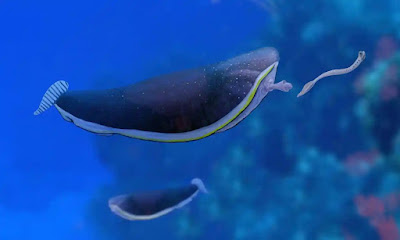 Typhloesus pursuing a conodont
The recent study, though, found that a close examination of Typhloesus fossils showed the animal had a radula -- a rasping, toothlike organ found in mollusks, especially gastropods (snails).  So if the research team's conclusions are correct, Typhloesus was a free-swimming, shell-less gastropod -- perhaps a little like modern nudibranchs.
Not everyone is convinced, though.  There are other animals who have evolved radula-like structures, and the placement of this orphan species in Phylum Mollusca is still tentative at best.  Mark Purnell, of the Centre for Palaeobiology at the University of Leicester, who was not involved in the current research, said, "It is still a very strange animal.  [The researchers] have found some tantalizing new information, but it is far from being a slam-dunk case in terms of definitely knowing what this weird thing is."
It's fascinating to contemplate how different the world was back then -- during the Carboniferous Period there were nearly worldwide rainforests of "trees" more closely related to today's ferns and club mosses, which drove the oxygen concentration of the atmosphere so high (35%, by some estimates, as compared to the current 21%) that animals like arthropods got huge.  There were predatory dragonflies with seventy-centimeter wingspans, and millipedes two and a half meters long and a half a meter wide, weighing an estimated fifty kilograms.
And in the oceans, there were some creatures so strange they've yet to be placed into the animal family tree with any real certainty.  It certainly brings home the truth of the final words of Charles Darwin's The Origin of Species, that evolution continually produces "endless forms most beautiful and most wonderful."
****************************************