Hamlet famously states to his friend, "There are more things in heaven and earth, Horatio, than are dreamt of in your philosophy," and every time we look into the night sky, we're reminded how true that is.

In the last hundred years astronomers have discovered deadly gamma-ray bursters and black holes, neutron stars for which a teaspoon of their material would weigh as much as a mountain, planets made of stormy swirls of ammonia, methane, and hydrogen, ones made of super-hot molten metal, water-worlds completely covered with deep oceans.  We've seen newborn stars and stars in their violent death throes, looked out in space and back in time to the very beginning, when the universe itself was in its infancy.

Even with all these wonders, new and bizarre phenomena are still being discovered every time our technology improves.  Take, for example, the "cataclysmic variable" that was the subject of a paper in Nature this week, a pair of stars locked in such a tight dance that they whirl around their common center of gravity in only fifty-one minutes.

Given the euphonious name ZTF J1813+4251, this pair of stars is comprised of a white dwarf -- the burnt-out core of a low-mass star like the Sun -- and an even more lightweight star not much bigger than the planet Jupiter.  The white dwarf has been swallowing (the astronomical term is "accreting") the hydrogen fuel from its partner, and they're drawing closer together, meaning that the process will speed up.  Eventually all that will be left of the partner star will be its core, and astronomers predict that at that point, they will have an orbital period of eighteen minutes.  But once the accretion process ends, drag in the pair's movement will rob energy from the system, the wild stellar pirouette will slow down, and they will gradually start to move apart again.

It's fortunate that the partner star is as light as it is; if it had more mass, it would be headed toward one of the most violent fates a star can have -- a type 1a supernova.  White dwarfs are the remnants of stars that have exhausted all their fuel, and they shrink until the inward pull of gravity is counterbalanced by the mutual repulsion of the negatively-charged electrons that surround the atoms they're made of.  There's a limit, though, to how much this repulsive force can withstand; it's called the Chandrasekhar limit, after its discoverer Subrahmanyan Chandrasekhar, and is equal to 1.44 solar masses.  For a lone white dwarf -- as our Sun will one day be -- this is not a problem, as there won't be anything substantial adding to its mass after it reaches that point.

The situation is different when a low-mass star is in a binary system with a giant star.  When the low-mass star burns out and becomes a white dwarf, it begins to rob its partner of matter -- just as ZTF J1813+4251 is doing.  But in this case, there is a lot more mass there to rob.  Eventually, the white dwarf steals enough matter from its companion to go past the Chandrasekhar limit, and at that point, the mutual repulsion of the electrons in the stars atoms lose their contest with the inward pull of gravity.  The white dwarf's core collapses completely, making the temperature skyrocket so high that its helium ash can fuse into carbon and other heavier elements, suddenly releasing catastrophic amounts of energy.  The result is...

In the process, the matter from the exploded dwarf star is scattered around the cosmos, and becomes the parent material for forming planets.  It is, in fact, how most of the carbon, oxygen, and nitrogen in our bodies were formed.

As Carl Sagan famously said, "We are made of starstuff." 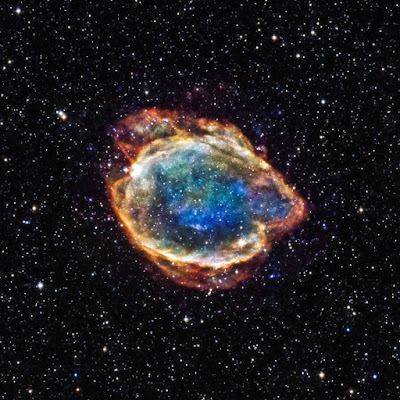 But ZTF J1813+4251 isn't headed for such a dramatic exit -- eventually the white dwarf will pull away the outer layers of the partner star's atmosphere, and after that the two will just spiral around each other wildly for a few million years, gradually cooling and slowing from their current frenetic pace.  So maybe "cataclysmic" isn't the right word for this pair; their crazy tarantella will simply wind down, leaving two cold clumps of stellar ash behind.

Honestly, if I were a star, I think I'd rather go out with a bang.