I love the mystery of the universe.  I love all the questions that have come to us over thousands of years of exploration and hypotheses.  Stars exploding years ago, their light traveling to us years later; black holes absorbing energy; satellites showing us entire galaxies in areas thought to be devoid of matter entirely… all of that has thrilled me for years… but when I looked in the opposite direction, into space, there was no mystery, no majestic awe to behold... all I saw was death.

I saw a cold, dark, black emptiness.  It was unlike any blackness you can see or feel on Earth.  It was deep, enveloping, all-encompassing.  I turned back toward the light of home.  I could see the curvature of Earth, the beige of the desert, the white of the clouds and the blue of the sky.  It was life.  Nurturing, sustaining, life.  Mother Earth.  Gaia.  And I was leaving her.

I had thought that going into space would be the ultimate catharsis of that connection I had been looking for between all living things—that being up there would be the next beautiful step to understanding the harmony of the universe.  In the film Contact, when Jodie Foster’s character goes to space and looks out into the heavens, she lets out an astonished whisper, "They should’ve sent a poet."  I had a different experience, because I discovered that the beauty isn’t out there, it’s down here, with all of us.

He's right in one sense; the vast majority of the universe is intrinsically hostile to life.  It's why I've always found the Strong Anthropic Principle a little funny.  The Strong Anthropic Principle claims that the physical constants which are, as far as we currently understand, not derivable from anything else -- such as the strength of the four fundamental forces, the masses of the subatomic particles, the speed of light, the fine structure constant, and so on -- were set with those values in order to make the universe accommodate matter and energy as we know it, and ultimately, life.  The words they use are "fine tuned."  If any of those constants were even a little bit different, life would be impossible.

This whole line of thought, though, ignores three things.  First, of course we live in a universe that has the physical constants set such that life is possible; if they weren't, we wouldn't be here to discuss the matter.  (This is called the Weak Anthropic Principle.)  Second, when I said those constants are not derivable from anything else, you should place the emphasis on the phrase that came before it; as far as we currently understand.  It may be that physicists will eventually find a Grand Unified Theory showing that some -- perhaps all -- of the physical constants are what they are because of a single fundamental principle stating that they aren't arbitrary after all, that they couldn't have any other values.

Third, as Shatner points out, most of the universe -- even most of the Earth, honestly -- is pretty fucking hostile to life as it is.

But I question his statement that this makes the universe any less beautiful.  I was in Iceland this summer and got to see an erupting volcano -- the whole nine yards, with jets of orange lava fountaining up and cascading down the side of the cinder cone.  I could feel the heat on my face from where I stood, about a hundred meters away; much closer, and my skin would have blistered.  The sulfur fumes were only made tolerable by the fact that it was a windy day.  The hillside beneath my feet was vibrating, the air filled with a roar like thunder.  Standing there, I was in no doubt at all about my own frailty.

It was also incredibly, devastatingly beautiful.

I was thinking about the beauty of the universe -- as unquestionably inimical as it is to our kind -- when I saw images from the Hubble Space Telescope of the Cat's Eye Nebula, along with a visualization of what it would look like close up, created by a team led by Ryan Clairemont of Stanford University: 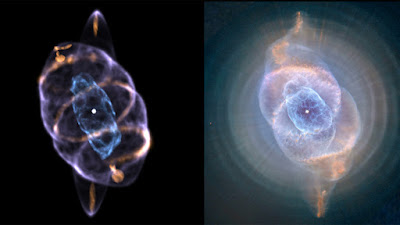 The spirals are thought to be caused by two stars in the center of the nebula orbiting around each other, each emitting a pair of plasma jets that have been twisted by the stars' motion in the fashion of the jets of water sprayed from a spinning garden sprinkler.  But whatever the cause of the pattern, I was immediately struck by its awe-inspiring beauty.

I've never been to space, and I don't mean to gainsay Shatner's experience.  But I find the vast immensity of space to be beautiful even though I know my own existence in it is all but insignificant.  I can look up at the autumn constellations, as I did last night -- Perseus and Andromeda, Pegasus and Pisces and Aquarius -- and appreciate the beauty of those stars glittering in the night sky from the warm safety of my home planet.  Maybe some of them have planets harboring their own frail, fragile life forms, who just like us are dependent on the searing fires of their host stars to survive, and just like us look up into the night sky with awe and wonder.