Because we clearly don't have enough to worry about, a new paper in Proceedings of the Royal Society A describes apparent solar storm events captured in tree ring data that, if they happened today, would simultaneously fry every electronic device on Earth.

Those of you who are history buffs may think I'm talking about the 1859 Carrington Event, that caused auroras as near the equator as the Caribbean and triggered sparking, fires, and general failure in the telegraph system.  But no: the repeated Miyake Events -- which occurred six times in the last ten thousand years, most recently in 993 C.E. -- are estimated to have been a hundred times more powerful than Carrington, and worse still, scientists have no clear idea what caused them.

The evidence comes from carbon-14 deposition rates.  Carbon-14 is a radioactive isotope of carbon that is produced at a relatively steady rate by bombardment of upper-atmosphere carbon dioxide by cosmic rays.  That C-14 is then incorporated into plant tissue via photosynthesis.  So tree ring C-14 content is a good indicator of the rate of radiation bombardment -- and the team, led by astrophysicist Benjamin Pope of the University of Queensland, have been analyzing six crazily high spikes of C-14 in tree rings, called "Miyake Events" after the scientist who first identified them. 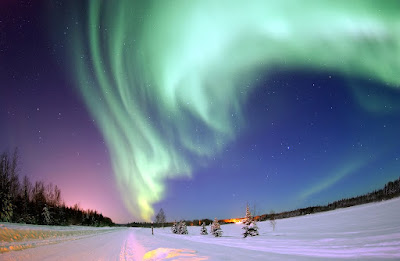 Identifying the events is not the same as discovering their underlying cause, and the Miyake Events have the researchers stumped, at least for now.  Solar storms tend to coincide with the eleven-year sunspot cycle, but the Miyake Events show no periodicity lining up with sunspots (or anything else, for that matter).  There has even been speculation that they may not be of solar origin at all, but come from some source outside the Solar System -- perhaps a gamma-ray burster or Wolf-Rayet star -- but there are no known candidates that are anywhere near close enough to be responsible, especially given that the phenomenon (whatever it is) has occurred six times in the past ten thousand years.

So the Miyake Events may be real, honest-to-goodness cosmic storms.  Not, I hasten to add, the nonsense from the abysmal 1960s series Lost in Space, wherein Will Robinson and Doctor Smith and the Robot would be amusing themselves, then suddenly the Robot would start flailing about and yelling "Danger!  Danger!  Cosmic storm imminent!"  Then some wind would happen and blow over cardboard props and styrofoam rocks, and Will and Doctor Smith would pretend they were being flung about helplessly.  In the midst of all this there would be a cosmic noise ("BWOYOYOYOYOYOY") and an alien would appear out of nowhere.  These aliens included a space pirate (complete with an electronic parrot on his shoulder), a bunch of alien hillbillies (their spaceship looked like an old shack with a front porch), a motorcycle gang, a group of hippies, some space teenagers, and in one episode I swear I am not making up, Brünhilde, wearing a feathered helmet and astride a cosmic horse (which unfortunately appeared to be made of plastic).  She then proceeded to yo-to-ho about the place until eventually Thor showed up, after which things got kind of ridiculous. 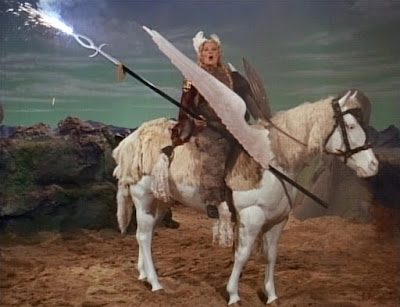 Anyhow, back to the real cosmic storms.  The weirdest thing about the current research is the discovery that these were not sudden, one-and-done events like Carrington, which only lasted a few hours.  "At least two, maybe three of these events... took longer than a year, which is surprising because that's not going to happen if it's a solar flare," Pope said, in an interview with ABC Science.  "We thought we were going to have a big slam dunk where we could prove that [Miyake events were caused by] the Sun...  This is the most comprehensive study ever made of these events and the big result is a big shrug; we don't know what's going on...  There's a kind of extreme astrophysical phenomenon that we don't understand and it actually could be a threat to us."

What's the scariest about an event like this is that even though it wouldn't directly cause any harm to us, it could cause a simultaneous collapse of the entire electrical infrastructure, and that the damage would take weeks or months even to begin to fix.  Can you imagine?  Not only no internet, but no GPS, no cellphones, maybe even no electrical grid.  Air travel would be impossible without the radar and navigational systems that it relies on.  For the first time since electricity became widespread, the world would suddenly go dark -- not only figuratively, but literally.

Research into what caused the Miyake Events is ongoing.  Even if they can figure out what caused them, though, it's hard to see what, if anything, we could do about it.  Chances are they'd occur without warning -- everything toodling along normally, then suddenly, wham.

Probably best not to worry about it.