I have a great fondness for a glass of fine red wine or single malt scotch, but I have to admit something up front; to say I have an "undiscerning palate" is a considerable understatement.

I basically have two taste buds: "thumbs up" and "thumbs down."  I know what I like, but that's about where it stops.  On the other end of the spectrum from me are "supertasters" -- people who have a much greater acuity for the sense of taste than the rest of us slobs -- and they are in high demand working for food and drink manufacturers as taste testers, because they can pick up subtleties in flavor that bypass most people.  They're the ones we have to thank for what you read on the labels in wine stores ("This vintage has a subtle nose of asphalt and boiled cabbage; the flavor contains notes of wet dog, garlic, and sour cream, with a delicate hint of chocolate at the finish").

I make fun, but I swear I once saw a sauvignon blanc described as tasting like "cat piss on a gooseberry bush."  I had to try it.

It was actually rather nice.  "Thumbs up."

What's always struck me about all this is how subjective it seems.  So much of it is, both literally and figuratively, a matter of taste.  This is why I thought it was fascinating that a new study has found a way to quantify the presence of congeners -- the chemicals other than alcohol introduced by the fermentation and aging processes -- which are the source of most of the flavor in wines, beers, and spirits. 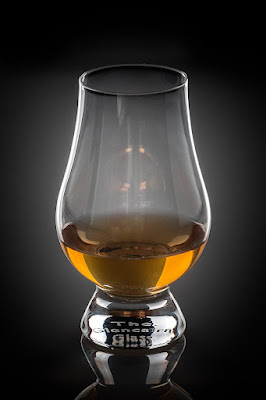 A paper in ACS Applied Nanomaterials, led by Jennifer Gracie of the University of Glasgow, describes a simple test for flavor in whisky using less than a penny's worth of soluble gold ions.  It turns out that the aging process for whiskies involves storing them in charred oak barrels, and this introduces congeners that react strongly with gold, producing a striking red or purple color.  The deeper the color, the more congeners are present -- and the more flavorful the whisky.

The maturation of spirit in wooden casks is key to the production of whisky, a hugely popular and valuable product, with the transfer and reaction of molecules from the wooden cask with the alcoholic spirit imparting color and flavor.  However, time in the cask adds significant cost to the final product, requiring expensive barrels and decades of careful storage.  Thus, many producers are concerned with what “age” means in terms of the chemistry and flavor profiles of whisky.  We demonstrate here a colorimetric test for spirit “agedness” based on the formation of gold nanoparticles (NPs) by whisky.  Gold salts were reduced by barrel-aged spirit and produce colored gold NPs with distinct optical properties...  We conclude that age is not just a number, that the chemical fingerprint of key flavor compounds is a useful marker for determining whisky “age”, and that our simple reduction assay could assist in defining the aged character of a whisky and become a useful future tool on the warehouse floor.

Which is pretty cool.  Better than relying on people like me, whose approach to drinking a nice glass of scotch is not to analyze it, but to pour a second round.  I guess there's nothing wrong with knowing what you like -- even if you can't really put your finger on why you like it.

That's why we non-supertasters rely on studies like this one to provide a gold standard to make up for our own lack of perceptivity.