Today's post combines archaeology, mythology, and an etymological mystery -- surely a recipe for something fascinating.

I first ran into the Blemmyes in Umberto Eco's tour-de-force medieval murder mystery The Name of the Rose, where they are described as a race of people living in Africa who have no heads; their faces are in the middle of their torsos.  The topic comes up because of the habit of a manuscript illuminator, Brother Adelmo, who has a habit of adorning his manuscript with fanciful creatures -- not only familiar ones like centaurs and unicorns and dragons, but Cynocephali (dog-headed men), Sciapodes (people with one leg and a huge foot, the inspiration for the Monopods in C. S. Lewis's The Voyage of the Dawn Treader) and... the Blemmyes. 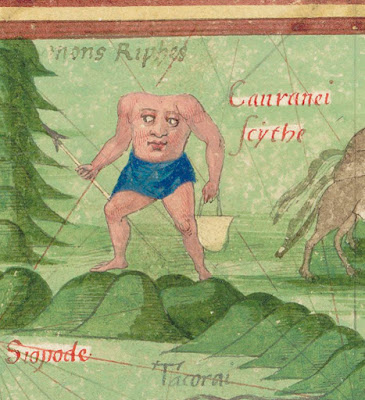 That's why I was pretty surprised when I ran into a story on Science Daily yesterday, about some research out of the Universitat Autonoma de Barcelona that was published last week in the American Journal of Archaeology.  The paper was about the Blemmyes -- who were apparently a real nomadic people that lived in what is now southern and central Egypt during Roman times, and who had their faces on their heads as per the usual human specifications.

What's weirdest about this is that the sources that mention the mythological headless Blemmyes and the ordinary human Blemmyes have almost no overlap; it's as if the authors of one didn't even talk to the authors of the other.  This might be understandable if it was some kind of linguistic coincidence, where two groups of people just happened to use similar-sounding words to describe two entirely different things; but I'm sorry, "Blemmyes" -- not only identical-sounding word, but identical spelling -- is just too weird for me to accept that they're unrelated homophones.  Add to that the fact that the alleged territory of the mythological Blemmyes and the home of the real Blemmyes both were what is now southern Egypt and northern Sudan, and I can't swallow it as some bizarre coincidence.

But the medievalists don't seem to have a good idea of how it happened.  The real Blemmyes, according to third century B. C. E. historian and writer Eratosthenes, were named after one of their ancient kings, King Blemys, but he is unattested elsewhere.  Other linguists have traced the name of the actual people to the Coptic word Ⲃⲁⲗⲛⲉⲙⲙⲱⲟⲩⲓ, Balnemmōui, but tracking the word earlier than that has proven impossible.  What seems certain is that the real Blemmyes are the ancestors of the people who today call themselves the Beja, who live in southern Egypt, Sudan, and Eritrea.

The mythological Blemmyes are even more of a mystery to linguists.  Seventeenth-century French antiquarian Samuel Bochart thought their name came from the Hebrew bly (בלי) "without" and moach (מוח) "brain;" linguist Louis Morié believed it was from the Greek blemma (βλέμμα) "look, glance" and muō (μύω) "close the eyes;" Egyptologist Hans Wolfgang Helck drew its descent from a Coptic word for "blind."

The truth is, no one knows for sure.

Oh, but if you want an even stranger coincidence, the paper in The American Journal of Archaeology about the real Blemmyes is about the discovery in the Egyptian town of Berenike of one of their shrines, within which was entombed fifteen mummified falcons...

... all of which were headless.

You can't make this shit up.

In any case, we're left with a mystery.  The fictional Blemmyes and the real Blemmyes -- and the descendants of the latter, the Beja -- seem to have nothing whatsoever to do with one another, except for a common name and living in approximately the same place.  But there has to be some connection, right?  I dunno, maybe we should be out there looking for real Cynocephali and Sciapodes.