One of the most terrifying alien species in the Star Trek universe is the Borg, a hive-mind collective of interlinked cyborgs that reproduce by assimilating individuals from other species, not the old-fashioned way (although they may do that, too, judging by how taken the Borg Queen was with Captain Picard in Star Trek: First Contact).
Turns out the assimilate-your-neighbor approach isn't limited to the world of science fiction.  There are terrestrial species who seem to follow the Borg's mantra of "We will add your biological and technological distinctiveness to our own."  Bacteria are especially good at doing this; they have small, mobile pieces of DNA called plasmids that are capable of being exchanged between cells, allowing gene flow without (strictly speaking) sexual reproduction.  Unfortunately for us, these plasmids frequently contain such human-unfriendly gene constructs as antibiotic resistance sequences and "pathogenicity islands" -- genes that code for a virulent attack on the host, such as the ones in the nasty strains of E. coli that can land you in the hospital.
Recently, however, scientists discovered a species of bacteria that has an assemblage of chunks of assimilated DNA (they actually called these strands "Borgs" after the Star Trek villains) that might prove useful to humans rather than harmful.  A species of Archaea (an odd clade of bacteria relatively unrelated to other, more common species, which includes groups that specialize in living in acidic thermal springs, anaerobic mud, and extremely salty water) called Methanoperedens was discovered in lake mud in western North America, and it was found to consume methane -- and has Borgs that allow it to do so at a spectacular rate.
Methanoperedens is odd even without the superlatives.  Most of the Archaea that metabolize methane don't consume it, they create it.  Methanogens -- Archaea that live primarily in deep ocean sediments -- produce methane as a byproduct of their metabolism, secreting it in the form of methane clathrate (frozen methane hydrate) at such a rate that the abyssal plains are covered with the stuff.  (Some ecologists believe that methanogens are, individual for individual, the commonest organisms on Earth, outnumbering all other species put together.) 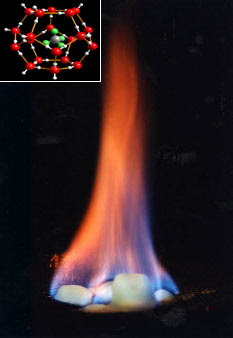 Burning methane clathrate -- "flammable snow" [Image is in the Public Domain courtesy of the United States Geological Service]
Methanoperedens, though, is a different sort of beast.  It lives by breaking down methane.  More interesting still, this ability comes from the fact that it has Borgs almost a third the size of its ordinary complement of DNA, made up of gene fragments assimilated from a dozen different species.
What has sparked interest in this bizarre species is the potential for using it to combat climate change.  Methane is a powerful greenhouse gas -- it has thirty times the heat-trapping capacity that carbon dioxide does -- and there's a significant concern that as the Earth warms, decomposing organic matter in the tundra will trigger a positive feedback loop, releasing more methane and warming the planet further.  If this methane-eating bacteria could consume some of the excess methane, it's possible that it could be turned into a tool for bringing the climate back into equilibrium.
I'm a little dubious, however.  It seems unlikely that any kind of attempt to culture Methanoperedens would be possible on a big enough scale to make a difference.  It'd be nice if we'd just face up to the fact that there is, and always has been, one obvious solution; stop burning so damn much fossil fuel.  We're so desperate to cling to our conspicuous-consumption lifestyle that we can't face the reality of what we're doing to the long-term habitability of the Earth.  (It doesn't help, of course, that a great many of our politicians here in the United States are being funded by the fossil fuel industry.)
Whether or not this bacteria species turns out to have any practical applications, the whole phenomenon of evolution by assimilation of DNA from other species is absolutely fascinating.  We ourselves contain "foreign genes" -- most notably endogenous retroviruses, pieces of viral DNA that have taken up permanent residence in our DNA and which might comprise as much as five percent of our total genome.  (There is good evidence that the activation of certain endogenous retroviruses is connected to the development of multiple sclerosis and some forms of schizophrenia.)
Walt Whitman didn't know how true his words were when he said, "I contain multitudes."
****************************************