My wife claims that I only bring her along on tropical vacations to lure the mosquitoes away from me.
She is, to put it bluntly, a mosquito magnet.  If there's an outdoor party, and there is a single lonely mosquito anywhere within a five-mile radius, it will find her.  Worse still, she has a bad allergic reaction to bites; being bitten leaves her itching for days.
Bad combo, that.
I, on the other hand, barely get bothered at all.  The same strange dichotomy got passed to our kids; our older son doesn't seem to get bitten much.  On the other hand, we took a family vacation to Belize when our boys were twelve and fifteen, and I saw our younger son was sitting on his bed one evening examining his legs.  I asked him what he was doing.
Turned out he was counting mosquito bites.  He lost count at around forty. 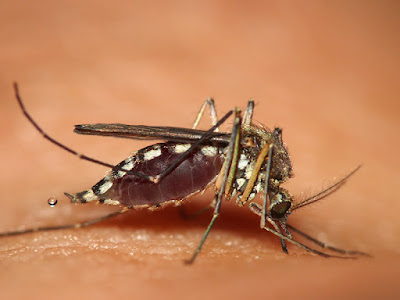 [Image licensed under the Creative Commons User:Ngari.norway, Mosquito bite4, CC BY-SA 3.0]
The contention that many have, of some people being more attractive to mosquitoes than others, was just demonstrated conclusively in a paper last week in the journal Cell, by a team led by Leslie Vosshall of the Howard Hughes Medical Institute.  What Vosshall and her team did was to have volunteers wear nylon stockings on their arms for six hours, allowing the fabric to pick up any chemicals the person was secreting in their sweat and skin oils.  The nylons were then cut up into squares, and the pieces presented to hungry Aedes aegyptii mosquitoes.
The results were unequivocal.  One subject, #33, had an attractiveness to mosquitoes over a hundred times greater than the least attractive subjects, #19 and #28.
What seems to set apart people like poor #33 is the particular cocktail of carboxylic acids in their skin oils.  Carboxylic acids are small organic molecules characterized by having a carboxyl group -- a carbon atom double-bonded to an oxygen atom and single-bonded to a hydroxyl (-OH) group -- and include such familiar compounds as amino acids and fatty acids.  It turns out that of the hundreds of different kinds of carboxylic acids, each person produces different ones in different amounts -- and this "scent" (not that you or I would notice the difference) is what determines who is a mosquito magnet, and who largely gets left alone.
A little discouraging, though, is their other finding; that this chemical signature is relatively resistant to changes in diet and grooming habits.  None of the contentions you might have heard -- eating foods rich in B vitamins, using unscented soaps and shampoos, and so on -- seemed to make any difference.  The people who were mosquito attractors stayed that way throughout the course of the experiment, regardless what they ate and what cosmetic products they used.
While this study might eventually lead to better repellents, at the moment, we're kind of stuck where we were.  The best mosquito repellent is DEET (diethyltoluamide), which has a pretty good track record for safety, although (as I found out when I was in Ecuador) dissolves plastics.  (Fortunately, the only thing damaged was a ball-point pen; I discovered this when I applied some mosquito repellent, picked up the pen, and it promptly stuck to my hand.)  Some other products, like Avon's "Skin So Soft," seem to have some effect but aren't nearly as reliable as DEET.
Maybe if Vosshall and her team can pinpoint exactly which carboxylic acids are causing the problem, they could find some kind of repellent that would work by blocking them or breaking them down.  I know my wife would appreciate it.  It's late October in upstate New York, and the eight mosquitoes still left alive around here are still waiting by our back door for one last chance to bite her.
****************************************