Back in the 1970s and 1980s, astrophysicist Vera Rubin discovered something odd about the rates at which stars were revolving around their home galaxies; the stars in the outer reaches of the galaxy were orbiting as quickly as the ones nearer to the center.
Called the "flat rotation curve problem," this observation flies in the face of an astronomical principle that's been known since the seventeenth century, which is Kepler's Third Law.  Kepler's Third Law states that for bodies orbiting the same center of gravity, the square of the orbital period (time taken for the object to make a single orbit) is proportional to the cube of the average distance between the object and the center of gravity.  Put more simply, the farther out an orbiting object is, the slower it should be moving.  This law holds beautifully for the planets, asteroids, and comets in the Solar System.
Unfortunately, when Rubin looked at galactic rotation rates, she found that Kepler's Third Law appeared not to hold.  What it looked like was that there was a great deal more mass in the galaxy than could be seen, and that mass was spread out in some kind of invisible halo surrounding it.  That additional mass would account for the flatness of the rotation curves.
It was forthwith nicknamed dark matter.
The calculations of Rubin and others showed that the amount of dark matter was not insignificant.  Current estimates place it at around 27% of the total mass of the universe.  Only 5% is baryonic (ordinary) matter, so the matter we can't see outweighs ordinary matter by over a factor of five.  (The other 68% is the even weirder and more elusive dark energy, about which we know next to nothing.)
The problem is, every experiment designed to directly detect dark matter has resulted in zero success.  Whatever it is, it seems not to interact with ordinary matter at all other than via its gravitational pull.  These repeated failures drew rueful comparisons between dark matter and the luminiferous aether, the mysterious substance through which light waves were alleged to propagate.  The aether was proposed back in the nineteenth century because it was hard to imagine how light waves moved through a vacuum unless it had a medium -- what, exactly, was waving?  The existence of aether was conclusively disproven by the elegant Michelson-Morley experiment, which showed that unlike any other kind of wave, the speed of light waves seemed to be invariant regardless of the direction of motion of the observer.  It remained for Albert Einstein to explain how that could possibly be -- and to figure out all the strange and counterintuitive outcomes of this phenomenon, with his Special and General Theories of Relativity.
More than one modern physicist has surmised that dark matter might similarly be the result of a fundamental misunderstanding of how gravity works -- and that we are just waiting for this century's Einstein to turn physics on its head by pointing out what we've missed.
Enter Israeli physicist Mordehai Milgrom.
Milgrom is the inventor of MoND (Modified Newtonian Dynamics), a model which -- like the Theories of Relativity -- proposes that the explanation for the anomalous observations is not that there's some unseen and undetectable substance causing the effect, but that our understanding of how physics works is incomplete.  In particular, Milgrom says, there needs to be a modification to the equations of motion at very small accelerations, such as the ones experienced by stars orbiting in the outer reaches of galaxies.
With those modifications, the orbital rates make perfect sense.  No dark matter needed. 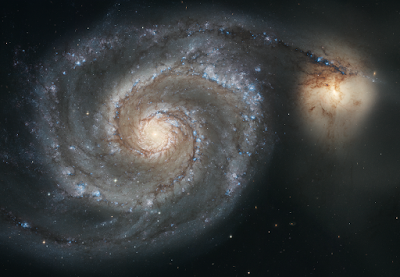 The Whirlpool Galaxy [Image licensed under the Creative Commons NASA/ESA/JPL/Hubble Heritage Team & C. Violette, M51 (2), CC BY-SA 4.0]
As with relativity -- and any other time someone has claimed to overturn a long-established paradigm -- MoND hasn't achieved anywhere near universal acclaim.  The Wikipedia article on it (linked above) states, gloomily, "no satisfactory cosmological model has been constructed from the hypothesis."  And it does lack the blindingly bright insight of Einstein's models, where taking the "problem of the seeming invariance of the speed of light" and turning it into the "axiom of the actual invariance of the speed of light" triggered a shift in our understanding that has since passed every empirical test ever designed.  Compared to Einstein's model, MoND almost seems like "Newton + an add-on," with no particularly good explanation as to why high accelerations obey Newton's laws but low ones don't.  (Of course, there's a parallel here to Einstein, as well -- at low speeds, Newton's laws are accurate, while at near-light speeds, Einsteinian effects take over.  So maybe Milgrom is on to something after all.)
After all, it's not like the other option -- dark matter -- has much going for it experimentally.
And MoND just got a significant leg up with an observation of the behavior of star clusters that was the subject of a paper in Monthly Notices of the Royal Astronomical Society last week.  In open star clusters, as new stars ignite it produces an outward push that can blow away material (including other stars), creating two "tidal tails" that precede and trail the cluster as it moves through space.  According to Newtonian dynamics (with or without dark matter), the two tails should have about the same mass.
"According to Newton's laws of gravity, it's a matter of chance in which of the tails a lost star ends up," explains Dr. Jan Pflamm-Altenburg of the Helmholtz Institute of Radiation and Nuclear Physics at the University of Bonn.  "So both tails should contain about the same number of stars.  However, in our work we were able to prove for the first time that this is not true: In the clusters we studied, the front tail always contains significantly more stars nearby to the cluster than the rear tail."
This peculiar observation fits the predictions of MoND much better than it does the predictions of the Newtonian model.
"The results [of simulations using MoND] correspond surprisingly well with the observations," said Ingo Thies, co-author of last week's paper.  "However, we had to resort to relatively simple computational methods to do this.  We currently lack the mathematical tools for more detailed analyses of modified Newtonian dynamics."
So the matter is very far from settled.  What's certain is that, similar to the physicists' situation in the late nineteenth century with regards to the behavior of light, there's something significant we're missing.  Whether that's some odd form of matter that doesn't interact with anything except via gravity, or because we've got the equations for the laws of motion wrong, remains to be seen.
And of course, after that, we still have dark energy to explain.  I think the physicists are going to be busy over the next few decades, don't you?
****************************************