Putting Christ back in... Halloween?

Every year about this time, evangelicals start stepping up the pressure on Christians to discourage them and their children from participating in Halloween, an event that they see as celebrating Satan.  Some of the devout even believe that demonic curses can be transmitted via Halloween candy.  This has made the candy manufacturers sit back, in the fashion of Jabba the Hutt, and say, "Your fundamentalist mind-tricks will not work on us.  Bo shuda."  Then they give a nasty throaty chuckle and respond by bringing out the Halloween candy even earlier each year, until eventually they'll be putting out next year's candy on November 1 of this year.

Most of the rest of us just seem to find the whole thing unintentionally hilarious. 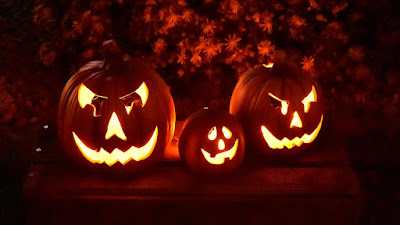 [Image licensed under the Creative Commons Paul Hermans, Halloween in Uikhoven 27-10-2020 19-07-07, CC BY-SA 4.0]
The evangelicals, who in this fight see themselves in the role of Luke Skywalker, are not going to give up and let themselves be eaten by the Sarlacc (i.e. Satan), so every year, they gird their loins and prepare for battle.  This year's sortie, which I swear am not making up, is called "JesusWeen."  At first I thought, especially given the cringe-y name, that this was some sort of parody site intended to ridicule the fear-mongering, but it seems to be entirely serious.  Meant to encourage Christians to do something more than hiding inside and locking the doors on Halloween, JesusWeen suggests some bold and proactive steps, to wit:
All of which makes me wonder if these people have ever met any actual children.  I don't know about you, but when I was a kid, if my friends and I had gone trick-or-treating, and a family had handed out scripture verses instead of mini-Milky Way bars, they would still be trying to find their house underneath the mass of toilet paper.

You have to kind of admire the JesusWeen people for their Daniel-in-the-lions'-den approach to winning a battle against impossible odds.  And however medieval their beliefs seem to be, no one can accuse them of being in the Dark Ages with respect to electronic networking. They have a JesusWeen chat, are on Twitter (@JesusWeen), and have several videos on YouTube.  They seem quite optimistic -- their website says, "Jesus Ween (Oct 31st) is expected to become the most effective Christian outreach day ever and that's why we also call it 'World Evangelism JesusWeen Venue: In Every Country, Every City, Every Street, Every Home.'"

I dunno.  That seems kind of like wishful thinking to me.  I'm doubting that Bibles are ever going to be the draw for kids that candy is.  My guess is that no one who wasn't already a believer is going to have some kind of epiphany because of JesusWeen, and once you get a reputation for inviting trick-or-treating kids into your house for a prayer circle, you probably won't be getting many visitors on Halloween night, except maybe the police.