Ever have the experience of getting into a car, closing the door, and accidentally shutting the seatbelt in the door?

What's interesting about this is that most of the time, we immediately realize it's happened, reopen the door, and pull the belt out.  It's barely even a conscious thought.  The sound is wrong, and that registers instantly.  We recognize when something "sounds off" about noises we're familiar with -- when latches don't seat properly, when the freezer door hasn't completely closed, even things like the difference between a batter's solid hit and a tip during a baseball game.

Turns out, scientists at New York University have just figured out that there's a brain structure that's devoted to that exact phenomenon.

A research team led by neuroscientist David Schneider trained mice to learn to associate a particular sound with pushing a lever for a treat.  After learning the sound, it became as habituated in their brains as our own expectation of what the car door closing is supposed to sound like.  If after that the tone was varied even a little, or the timing between the lever push and the sound was changed, a part of the mouse's brain began to fire rapidly.

The activated part of the brain is a cluster of neurons in the auditory cortex, but I think of it as the "What The Hell Just Happened?" module.

"We listen to the sounds our movements produce to determine whether or not we made a mistake," Schneider said.  "This is most obvious for a musician or when speaking, but our brains are actually doing this all the time, such as when a golfer listens for the sound of her club making contact with the ball.  Our brains are always registering whether a sound matches or deviates from expectations.  In our study, we discovered that the brain is able to make precise predictions about when a sound is supposed to happen and what it should sound like...  Because these were some of the same neurons that would have been active if the sound had actually been played, it was as if the brain was recalling a memory of the sound that it thought it was going to hear."
As a musician, I find myself wondering if this is why I had such a hard time unlearning my tendency to make a face when I hit a wrong note, when I first started performing on stage.  My bandmates said (rightly) that if it's not a real howler, most mistakes will just zoom right past the audience unnoticed -- unless the musician clues them in by wincing.  (My bandmate Kathy also added that if it is a real howler, just play it that way again the next time that bit of the tune comes around, and the audience will think it's a deliberate "blue note" and be really impressed about how avant-garde we are.) 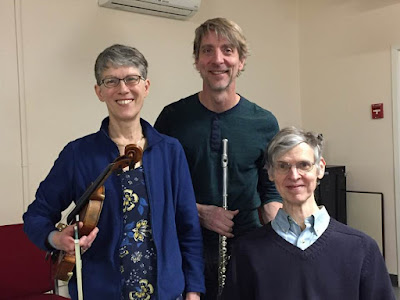 My band Crooked Sixpence, with whom I played for an awesome ten years -- l. to r., Kathy Selby (fiddle), me (flute), John Wobus (keyboard)
I found it a hard response to quell, though.  My awareness of having hit a wrong note was so instantaneous that it's almost like my ears are connected directly to my facial wince-muscles, bypassing my brain entirely.  I did eventually get better, both in the sense of making fewer mistakes and also responding less when I did hit a clam, but it definitely took a while for the flinch response to calm down.
It's interesting to speculate on why we have this sense, and evidently share it with other mammals.  The obvious explanation is that a spike of awareness about something sounding off could be a good clue to the presence of danger -- the time-honored trope in horror movies of one character saying something doesn't seem quite right.  (That character, however, is usually the first one to get eaten by the monster, so the response may be of dubious evolutionary utility, at least in horror movies.)
I find it endlessly fascinating how our brains have evolved independent little subunits for dealing with contingencies like this.  Our sensory processing systems are incredibly fine-tuned, and they can alert us to changes in our surroundings so quickly it hardly involves conscious thought.
Think about that the next time your car door doesn't close completely.
****************************************