The face of evil

I just finished a book that I'm going to be thinking about for a very long time; Alice Oseman's wonderful, devastating, beautiful, heartbreaking, and ultimately triumphant novel Radio Silence.

What has kept my mind coming back to the story over and over since closing the last page is not the pair of main characters, Frances Janvier and Aled Last, as well-drawn and engaging as they are; it's a minor character -- at least judging by the number of scenes in which she actually appears -- Aled's mother, Carol Last, whose influence pervades the entire story like some kind of awful miasma.

She's not what I would call "big evil."  Mrs. Last is no Sauron, no Darth Vader, no Jadis the White Witch.  She has no desire to rule the world and mow down thousands.  Her evil is so small as to be almost banal.  She "redecorates" Aled's room while he's away at school, destroying all of his posters and adornments, even painting over the mural of a galaxy he'd created on his ceiling, replacing it with a blank white surface.  She has his old dog put down without his knowledge, without even a chance to say goodbye.  She sends him a saccharine text every single time he makes a new episode of his beloved podcast, about spending his time in more productive pursuits instead of his "silly little show."  She takes her daughter's "inappropriate" clothing and burns it in the back yard, right in front of her.

And each and every time, she has an unshakable justification for why she does what she does.  There's always a reason, and any objections have about as much effect on her as an ocean wave striking a cliff face.  In the most chilling scene in the whole book, Mrs. Last proudly shows Frances what she's done to Aled's room while he's away, saying with a tight little smile, "It's just a few little rearrangements here and there.  I'm sure he'll appreciate a change...  Feels very fresh, don't you think?  A cleaner, emptier space makes a cleaner, sharper mind."

She doesn't even listen for Frances's response; of course the answer is yes.

For the Mrs. Lasts of the world, the answer is always yes.

It's a tribute to Alice Oseman's skill as a novelist that my response to Mrs. Last was as strong as it was.  But why we all feel revulsion at such a character is telling.  It's like an analysis I read a while back of why the most hated character in the Harry Potter universe isn't Lord Voldemort -- far and away, it's Dolores Umbridge.

Very few of us, fortunately, ever meet a Lord Voldemort.

But all of us know a Dolores Umbridge.  A teacher, a boss, a family member, a significant other, an acquaintance who, given a little power, uses it to tear down the souls of the vulnerable or dependent, and remodel them to suit.  A person who couches it all with a sweet smile that never reaches the eyes and a declaration of, "You know it's all for your own good, dear." 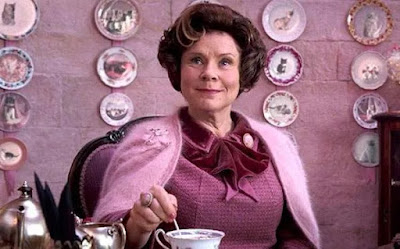 This, for most of us who have read the Potter series, is the real face of evil, not the grotesque, distorted visage of Lord Voldemort.
I know a lot of the reason that both Dolores Umbridge and Mrs. Last made me as sick at heart as they did is that my own childhood was laced through with this sort of thing.  Nothing as overt as what Dolores did to Harry or what Mrs. Last did to her children, perhaps; but the message I got was nothing if not consistent.  "You can't possibly like that music/television show/book/movie, can you?"  "Why are you wasting your time with that?"  "Mrs. So-and-So's son has accomplished so much, she must be so proud of him.  Maybe you should try following his example."  "Why bother with that?  You'll just give up in three weeks when you find out how hard it is."  And, most pervasively, over and over again, "No one wants to hear about that," whenever I talked about what I cared most deeply about, what I was passionate about.
My response was much like Aled's in Radio Silence; hide.  Protect what I loved so it wouldn't be destroyed.  It came out in uglier ways, sometimes; I did my own share of mistreating those who were vulnerable, to my everlasting shame, living up to my grandma's wise if tragic words that "hurt people hurt people."  I became secretive, angry, and deeply despondent.
And it took me years to admit that this subversive attempt to demolish who I actually was and rebuild some new, improved version was nothing short of emotional abuse.
That the Mrs. Lasts in my own life didn't win was more due to luck than anything I did to stop them.  For the past twenty years especially I have been fortunate enough to have people in my life who are determined to nurture rather than destroy, and I can say truly that they saved my life, both figuratively and literally.
I'll end this post with an exhortation to be that for the people around you; do not ever underestimate the power of simply appreciating and loving those you meet for who they are, embracing their weird, unique wonderful selves without feeling any need to change them.  Drop the desperate need to hem people in, to make them conform to some arbitrary standards of how they dress, what they eat, what music and books and shows they love.  Thank heavens we don't all feel passionate about the same stuff, right?  How boring would it be if every last person had exactly identical tastes, loves, opinions, and obsessions?
I'll end with a quote from someone I've quoted here many times before: journalist Kathryn Schulz, whose astonishing TED Talk "On Being Wrong" should be required listening for everyone.  Toward the end, she has an observation about why different perspectives don't imply that one person is right and the other is wrong -- and how sterile the world would be if that were true:

But to me, what's most baffling and most tragic about this is that it misses the whole point of being human.  It's like we want to imagine that our minds are these perfectly transparent windows and we just gaze out of them and describe the world as it unfolds.  And we want everybody else to gaze out of the same window and see the exact same thing.  That is not true, and if it were, life would be incredibly boring.  The miracle of your mind isn't that you can see the world as it is.  It's that you can see the world as it isn't.  We can remember the past, and we can think about the future, and we can imagine what it's like to be some other person in some other place.  And the most beautiful part is that we all do this a little differently.